This Friday and Saturday just gone seems to be a blur of culture frankly. Now I know this weekend has seen quite a few blogs with a De Bernier Review and Competition and then the latest sensation read but I couldn’t leave this post really (though I am still to report back from high jinx in Highgate and much more but those aren’t so urgent and can fit into other posts) as it’s just been and gone and I wanted tow rite about it while its fresh in my mind.

Friday night saw me head to Wimbledon Library for the first in two running evenings of delights that the Wimbledon Bookfest had to offer. Now I did offer one of you to come but no one took the bait and so I went alone (that was a cue for violins please) to see Kamila Shamsie talk about one of my favourite, favourite books of the year (which may go on to my soon to be revamped favourites page) the wonderful ‘Burnt Shadows’ which I still think is just amazing. I could gush on for longer but I will zip it there. They had gone to town with the event as we were entertained (Kamila had been held up anyway) by some wonderful Indian music along with drinks and nibbles and then some wonderful dancing before Kamila spoke.

Sometimes when you see an author it can put you off them for life, no seriously I won’t say which one it happened to me with but never reading a book of theirs again. Kamila Shamsie wasn’t one of those authors; she was very thoughtful, very insightful and very funny. Not one to shy away from asking as many questions as possible I asked when she knew that she wanted to be an author and who inspired her and she said ‘I wanted to write from the age of about nine and so I would say Roald Dahl and C.S Lewis were my first inspirations’ and went up even further in my estimation. She later discussed how her mother also an author used to insist ‘from the age of fourteen I had to read Ishiguro, Peter Carey, Salman Rushdie she was very into contemporary fiction and made sure she bought the Man Booker winner each year. I just spent all my free time wandering her library and reading what I could and what she occasionally pushed firmly in my direction… in Karachi there is very little else to do so I was very grateful for my mothers love of contemporary fiction as well as the classics’. 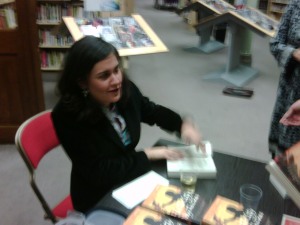 I queued up to get my book signed (you can see from the not very good picture above) and had to buy one for my Gran as I honestly think she would love the book and has been asking for five books she should put forward for her book group choice. I thought having a signed one might just tip it over the edge for a must read for them, and its also her birthday very soon (fans of Gran Savidge feel free to send gifts ha)! Who did Kamila then want to talk about, my Gran of course, honestly she’s becoming ever more famous… or infamous depending on your view, ha!

Saturday saw myself and Novel Insights being ‘culture vultures’ as she put it as we went to see a matinee of Matthew Bourne’s ‘Dorian Gray’ in the afternoon which was just utterly astounding, it just took my breath away, utterly wonderful its on tour so you must, must see it if you can. Its quite raunchy, I don’t think some of the other audience members were quite aware what was in store for them and we had some very shocked older ladies milling around in the interval looking quite perturbed and in need of a fanning down.

The evening saw us visit the Donald Hope Library in Colliers Wood for another author who doesn’t put you off by talking about their books, Mr Tom Rob Smith who I interviewed at his home a while back for Savidge Reads (and some freelance work too). He was there to talk us through the process of how he came to write the massively successful ‘Child 44’ even though bar in the sixth form he had never really been to Russia or had a huge interest in it until he was researching serial killers for short story he was going to make into a screenplay. Isn’t it amazing how these things happen? He was very entertaining and also very patient.

Now I mentioned the other day that this has been the first book festival I have ever been too, though have been to the odd signing, literary evening etc. Is it normal that one or two members of the audience completely and utterly try and make it about them? It happened with one gentleman at the Kamila Shamsie event who basically tried to down play the book and then gushed at her in the signing who had about ten questions. At the Tom Rob Smith gig it went another level as one woman must have asked about five questions in a row without being asked, one man kept interjecting with ‘Russian facts’ and another regaled us with the history of his Grandfathers entire history in relation to Stalin and communism for about five minutes before the host managed to interject during the man’s first taking of breath with ‘erm, but is there a question to go with all that?’ It was a wonderful event, well a wonderful start to a weekend really and of course I have managed to quite bulk up on my signed copies… 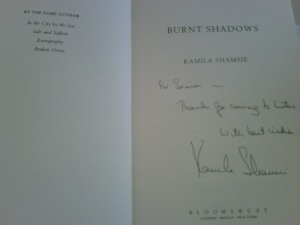 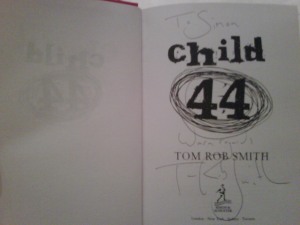 I am looking forward to next years Wimbledon Bookfest now and will also be making an effort to go to more. Which are the ones that I should simply not miss? I am sure you all have some book festival stories to tell and I would love to hear them.

12 responses to “Some Culture South West”