After The Fire, A Still Small Voice – Evie Wyld

One of the things that I have really loved about 2009 is extending the network of bloggers that I have met. This of course has lead me to some books and authors that I would possibly have missed. One such book is Evie Wyld’s debut and its thanks to a video Kim posted of the author describing her book as a ‘romantic thriller about men not talking’ which you can see here. With such an unusual surmising of a plot I couldn’t really not rush out and read this could I? 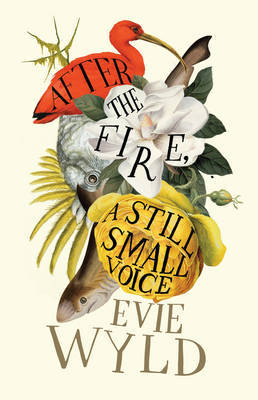 ‘After the Fire, A Still Small Voice’ is actually the tales of two separate men told in alternating chapters living in Australia told both in the present and in the past and not always in chronological order yet never confusing for the reader. It is really hard to tell you all about it without giving anything away but do bear with me as I will try and do my best without any spoilers and yet trying to cover everything that this wonderful book does.

The first of the men we meet is Frank. Having recently given up his life in Canberra after a rather rocky relationship he has moved to his Grandparents shack by the sea in an attempt to hide away from the world which he will have to live off, though in the end the world won’t remain hidden, neighbours will be friendly, and he will need money and so takes a part time job in the local marina. But in a small town he is watched with interest and suspicion, especially as a girl has recently gone missing. Franks a tough character and as we get to know him better and the story of his youth, though he is only in his twenties roughly, you gain an insight into why.

Leon is the second male character. We meet him in his youth in a town, where his family are looked down on for being immigrants, as he learns the trade of his father’s cake shop which when his father is sent to fight in Korea he must take over until his father comes back. Once his father returns he is a changed man and adds additional strain to the family home leaving Leon in charge for good. Only Leon himself then gets conscripted to fight in the Vietnam War and like his father the affects of war change him forever.

This makes the book sound quite simplistic and it’s not the case as Wyld throws in quite a few other plots such as a delightful romance for Leon and a wonderful tale of a little girl breaking through Frank’s tough exterior. To say anymore would simply give too much away. I thought that is was particularily remarkable how Wyld got so deeply into the two male lead characters, especially as they are both such complex, emotionally scarred and sometimes quite dislikeable characters. I wasn’t sure this book would be for me for the first two chapters and then I was hooked and read it in three sittings. Through these two men’s viewpoints I went on an emotion filled journey through loss, love, war, discrimination, and also most importantly I felt, hope.

I thought this was a marvellous piece of work, an incredibly impressive debut, I think Wyld is definitely an author to watch out for in the future. I am already wondering if there may be some recognition of this in the 2010 Orange Longlist, I do hope so, its already won The John Llewellyn Rhys prize. I am definitely honouring it with the Savidge Reads “Cover of 2009” prize, if ever you were to judge a book by its fabulous cover make it this one. I am not the only one who enjoyed this thoroughly as you can see Kim’s review here too. One of my books of the year no question.

27 responses to “After The Fire, A Still Small Voice – Evie Wyld”