The Literary Prize vs. Readability

Yesterday the bookish world, well in the UK at least, seemed all a twitter with the story of a new literary prize, called, erm, The Literature Prize. I am a big fan of any new book prize, both having co-founded one myself and because they promote books which is no bad thing in the current book climate, books need all the pushes they can get. However it seems to be that The Literature Prize has started out with some interesting, if unsettling, intentions and in a blaze of retaliation towards another prize, not the most positive of starts is it. 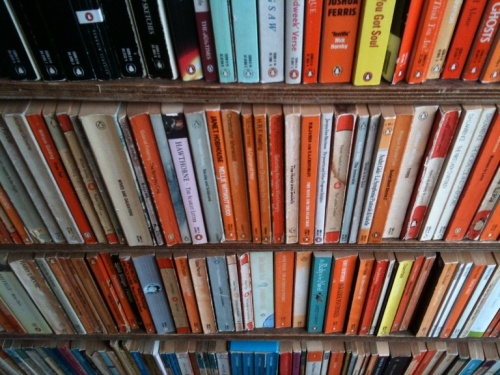 Books, glorious books, would any of these have won The Literature Prize?

When I jumped on board co-founding the Green Carnation Prize last July it was from a place of positivity. Ok, we did give it the name ‘The Man Fooker’ and it was from a comment of frustration on twitter by Paul Magrs that there was no platform/prize for works by gay men (now we include all LGBT authors) in the UK. Yet we set the prize up in a whirl of excitement and positivity, we didn’t start slagging other book prizes off, we weren’t snide, and we don’t aim to be. We simply wanted to make it happen. We also wanted to be inclusive of all works of literature and their diversity like readers and their reading habits, not just The Literature Prize’s specific aim to “establish a clear and uncompromising standard of excellence”. Yet who is setting/deciding the standard? It appears that the answer to that won’t be revealed for another few weeks.

The bit that made me get all the more cross was the snidely aimed “For many years this brief was fulfilled by the Booker (latterly the Man Booker) Prize. But as numerous statements by that prize’s administrator and this year’s judges illustrate, it now prioritises a notion of ‘readability’ over artistic achievement.” Firstly that to me sounds like ‘let’s get some press off another prize which is very successful’ (and it has been successful this year there’s a couple of great books on the shortlist and they are selling like hotcakes). Secondly it implies that the judges, people who read are too stupid to understand artistic achievement and so go for dumb down ‘readability’ instead.

Within hours of this announcement there started a raging debate about what the difference is between ‘literary’ and ‘readability’ or if indeed there really is one. I think the two can be mutually compatible. In fact the best books have that mix of being stunningly written, transporting you to another place in time or culture and living with its characters for however long the read takes. I think this can be done whilst making the reader want to do nothing but read that book whether it is plot or prose driven. The reader gives their dedication, time, energy and imagination to the book and the partnership between reader and writer is cemented. A book is designed to be read, learnt from and enjoyed. It shouldn’t be so ‘artistic’ no one can cope with it, unless you are a scholar, which leads me to my next annoyance.

The ‘academy of judges’. Now, if I am being generous I am hoping that my initial ‘you elitist bunch of *****’ reaction is unfair and that actually The Literature Prize will find a diverse ‘lottery’ of judges, not as I fear a bunch of academics who may alienate the common reader (that isn’t meant offensively). I think a perfect panel of judges would be a group of writers, journalists, literature teachers, bloggers, librarians, book group leaders but most importantly ALL avid readers. The main criteria for a book judge should simply be that they love books; they want excellent books to be getting noticed and they want to recommend their favourites to all in sundry.

My final annoyance is that, and apparently it is being currently procured, I bet you this prize gets a stupid amount of money thrown at it. Part of me in all honesty is disheartened because The Green Carnation could do with some for promotion etc, the judges do it all for free, but more importantly what about established prizes like the John Llewellyn Rhys Prize which didn’t happen this year due to  lack of funding and has been doing a wonderful job for decades? That to me seems unfair, but then life is I guess.

There is also the fact reading and readers are changing as they have for decades. Who knew back in the day that a popular romance novelist would become a classic and admitted author, she’s called Jane Austen, I don’t know if any of you have heard of her. Or that a serialised newspaper author or three would become deemed some of the greatest writers of British history, like those guys called Charles Dickens, Wilkie Collins and Sir Arthur Conan Doyle. They wouldn’t have won The Literature Prize if it had been conceived then would they? That said they probably wouldn’t have won the Booker either.

Aren’t we as readers always changing? Don’t our tastes change from book to book? Maybe it’s a generational thing, but I don’t want a book that meanders forever and ever in its own glory and prose and self satisfied nature, I believe that great characters, plots and escapism can be readable and literary, or maybe that’s just my taste. I bet Susan Hill isn’t looking for the same criteria in a book as she judges the Man Booker now as she did in the 1970’s, her reading and its tastes will have evolved even if in subtle or unconscious ways as life changes as it does for all of us. Some of us like to go from an Alan Hollinghurst to an Agatha Christie, from a Charles Dickens to a Stephen King or from David Nicholls to Umberto Eco. That’s the joy of reading, its diversity.

Who knows what the future of the The Literature Prize is, indeed the cynic in me says it could simply be a bit of pre-Booker announcement hype with its shroud of mystery; as with no announcement of who the board is, who is funding it or if indeed it will make its debut in 2012. Hmmm. I wish it luck, should it come to fruition, I think maybe it needs to change the way it holds itself in public in the future though, be less a prize trying to do what another prize already is (and sulking it’s not doing it as it feels it should) and then find its own voice and the ears of all readers out there. It has one thing going for it; it has certainly caused some interesting debate about books, readability and literature.

What are your thoughts on the new prize? Do you think readability and ‘literary merit’ are mutually exclusive, or should the best books have a percentage of both?

28 responses to “The Literary Prize vs. Readability”