Bookshops I Love; The Book Barge

As someone who doesn’t really like boats and really doesn’t like books set on them, you might be surprised that when I heard The Book Barge was coming to Manchester I was both excited and intrigued. I had heard about it on the Guardian book podcast a while back and thought the idea of having a book shop on a narrow boat that travelled around the country actually sounded like a rather lovely jaunt. I also love books and the idea of bartering for books intrigued me, so armed with a bag of M&S lunchtime treats I headed to the Quay to find out more. 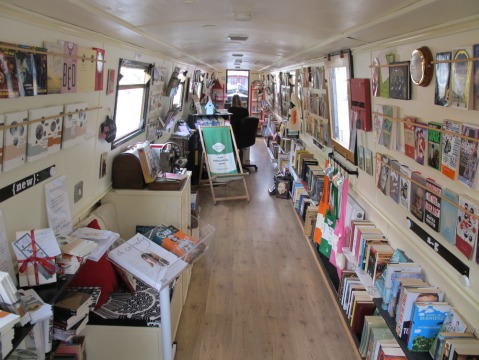 Then as I got to chat to Sarah (which you can hear on this week’s episode of The Readers podcast)who I became equally smitten with, as she is just lovely, I discovered it wasn’t quite the delight you might think. I doubly noticed this when I realised there was no toilet on board let alone a bathroom… or even a kitchen. Just lots and lots and lots (here come those ‘lots’ again) of books.

This is where the bartering comes in, as Sarah travels the country (at a ridiculously speedy 4 miles-per-hour) if she is in need of a shower, a meal, something fixed, or even a haircut, she will swap these for a book, or maybe two if it’s something specific or slightly more costly. This idea would fill me with dread; you could end up in a loonies house after all, but Sarah said she could spot them (I hope I imagined a small knowing squint aimed at me) a mile off and that most bookish people tend to be rather lovely.

Well one trip wasn’t enough and I ended popping abck a few times, including to one of Paul Magrs signings and also bringing Carol Birch and Jane Harris on board before Bookmarked, which Sarah then came to. In fact as the time went on I was even more thrilled with the Book Barge as not only did I leave with a wonderful old copy of ‘Trilby’ by George Du Maurier and ‘Fun Home’ by Alison Bechdel (which Rebecca Makkai had recommended we all read) but I have found a lovely new friend in the lovely Sarah and might just be spending a weekend on the Barge on its final voyage home after it visits Leeds and Nottingham. Do, if you can, pop and see Sarah (she is ace), preferably armed with an M&S picnic and grab a few books. She will be heading to Europe next year too.

Oh and before it combats the channel’s choppy waters, the Book Barge has quite a test coming… Polly of Novel Insights and I will be taking it over in the spring for a bit! How exciting is that? I am not sure Polly and Sarah are quite aware of what I have signed them both (and myself actually) up for!!

You can find out all about the Book Barge on it’s website here.

P.S I didn’t take either of these photo’s I will be replacing them later as mine are still on my phone. Oops.

21 responses to “Bookshops I Love; The Book Barge”