Every Man For Himself – Beryl Bainbridge

I have been questioning if I should post about ‘Every Man for Himself’, Beryl Bainbridge’s novel about the Titanic, because what should be a memorial of 100 years since the tragic and shocking event seems to have become some kind of celebration and cash cow to my mind. To completely contradict what I’ve just said though, I did pick this as my next Beryl Bainbridge novel because it was about the Titanic and the anniversary was approaching. What a brimming sack of contradictions my mind is! I’m hoping in doing this post I’m not seen as jumping on a band wagon but wanting to mark this day in some way. I will actually be at the Titanic exhibition in Liverpool today when you read this. 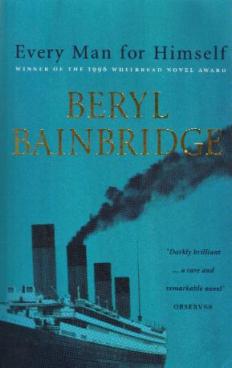 ‘Every Man for Himself’, to summarise succinctly, is the tale of a young american man Morgan and the four fateful days that he sails on the Titanic. That simply is the story, right there.

Through Morgan’s narration Bainbridge creates an interesting viewpoint of society at the time. Morgan in rich, not by birth through ‘family’ rather a benefactor Uncle. He is seen as the nouveau riche which is a curse and a blessing amongst the richest of the rich who sailed onboard, for it was the ticket to have. He is idealistic though and so his sympathies lie with the lower classes on board and the staff, ‘the unfortunates’.

‘It was then he said, ‘Does it not occur to you that none of them are normal?’ At first I put up a defence, mostly because I feared I was included in their number, but soon fell silent. Nothing he said could be disputed. My friends, he argued, were not living in the proper world. Their wealth, their poorly nurtured childhoods, their narrow education, their lack of morals separated them from reality. Some, those with more intelligence, might struggle to break away, and succeed for a short time, but in the end, like the action of a boomerang, it was inevitable they would return to the starting point. ‘Then there’s little hope for me,’ I said.’

It’s this mix of societies in such a small place which seems to be a perfect way for Beryl to make her viewpoints on the upper classes vs the lower. It weaves an interesting tension though means the cast of characters are rather dislikable.

As I have said its a book brimming with ideas yet one which doesn’t have the fastest of pace, that’s not a critique either. When reading this novel I pondered over its slow burning nature. I considered if maybe Beryl thought we knew what was coming for the Titanic, I won’t say if Morgan survives or not so you read it, so the story meanders and builds. This of course means she can build the tension delicately leading to the inevitable conclusion. (I was shocked to see on Twitter some people had no idea it was real and thought it was ‘just a film’, what?)

The tragic moment itself however does anything but dwindle. I found myself incredibly moved as Bainbridge writes the moment from the infamous iceberg until Titanic sinks. I was even routing for some of the most unpleasant characters and the extent of the tragedy and speed which it takes place, the change from ‘jolly japes’ to panic, is vividly captured.

‘Everyman For Himself’ is a vey compelling, moving and cleverly constructed and crafted novel. The title seems obvious knowing the shortage of life boats but actually in the case of this novel I would say it is the general theme of the characters motivations in live whatever class, even Morgan as he watches them all on our behalf.

8 responses to “Every Man For Himself – Beryl Bainbridge”