Fret not, this is not some random post where I declare my love for Dan Rhodes and ask for his hand, though I have been a big fan of his for years and years I wouldn’t go that far. However ‘Marry Me’ is the title of Dan Rhodes latest collection of short stories, which seemed the perfect antidote for having had a real book slump after the torture experience of ‘Tess of the D’Urbervilles’. I needed something that would make reading a joy and get me thinking and that is just what ‘Marry Me’ did.

The theme in all the short tales in ‘Marry Me’ are, rather unsurprisingly from the title, all based around marriage. Be these tales of people who are thinking of getting married, getting married, having just been married or ending their marriage the whole gambit is covered here. You have couples getting married through true love, guilt, accident and people getting out of it for the same reason.

Describing them like that makes them sound like they are all going to be rather dark and cynical, and whilst there are a good few dark little twisted tales (part of the reason I am a fan of Rhodes writing so much) here there are also some that are incredibly raw and also rather sentimental and tender too even if it is not initially obvious. 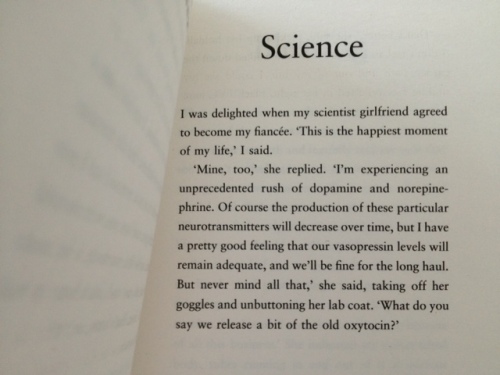 You would think in a collection of 79 oh-so-short stories there might be some kind of repetitive nature. I will admit that on occasion there were a few that opened with ‘when my fiancé died…’ and there were lots of cheating spouses and husbands who thought everything was fine when it really wasn’t yet the book is brimming with variety. ‘Perfect’ shows the lengths that people will go to for the most special, better than anyone else’s, of days. ’Androids’ takes the theme of, erm, themed weddings to a very dark (but I laughed so, so hard) conclusion. ‘Her Old Self’ shows you should never marry someone because you think you are doing them a favour or out of guilt. There was even a hint of a different genre, science fiction, in ‘Cold’ where a woman gets sick of her husband interfering with the plans she asks him to be cryogenically frozen for a few weeks to let her get on with. 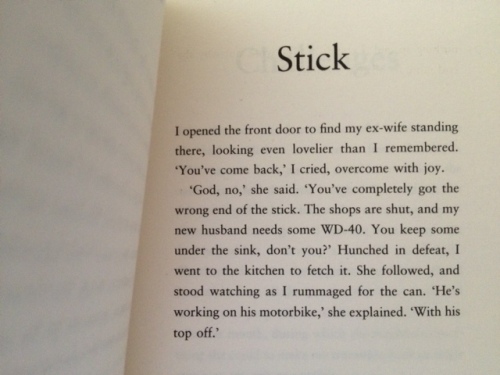 What I always admire with Dan Rhodes work is how he likes to contradict himself and throw the reader completely. Here he does this by being super critical of marriage, despite the fact the book is dedicated to ‘wife features’, on the one hand and then suddenly giving you a quirky cute tale that you weren’t expecting. This is always the case in both his novels and his short stories. With his short stories like these, and many of the tales in his previous collection ‘Anthropology’, which at the longest can be a page and a half and at their shortest a few sentences (flash fiction really) it is like his brilliance is concentrated. He can create a situation and atmosphere in a paragraph a whole character in a sentence, it is quite mind-bogglingly clever. They are also overall darkly funny, you’ll laugh when you normally wouldn’t.

I would heartily recommend anyone and everyone give ‘Marry Me’ ago. You might not want to buy it for someone you love, they might not get the way it’s meant, but if you love literature, language and the way that words can work at their most concentrated (and because you like to be entertained and made to laugh) then you should definitely give this a whirl. I would highly recommend it, like I would all the books of Rhodes that I have read.

I have just realised that Dan Rhodes should really be in my Hall of Fame, as I have read and liked so much of his work, but I am going to save that for when I have read ‘This is Life’ which has been on my TBR for far too long and I have been saving to read for a rainy day. Who else has read Dan Rhodes and what do you think of his work?