Giving up on a book for me is no easy thing. I have always had the feeling that people don’t tend to talk about the books they give up on as it seems like a failure. Here I may just be imposing how I feel onto everyone else, as for me if I give up on a book I always feel rather cross with myself. Though not as wracked with guilt as I used to get when I had the, now seemingly rather mad, attitude that any book I started I simply had to finish. I do have a page 50, with a page 60 clause, rule now with books and if they aren’t working by then, then it is fine (and indeed time) to put them down and move on to something else. This year I have noticed though that there have been a few books I have simply stopped half way through one of them being one of the most infamous books of the year, Eleanor Catton’s The Luminaries… 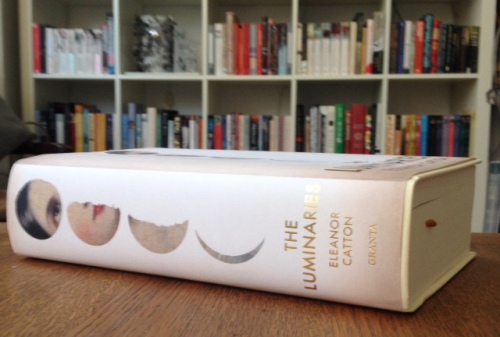 In so many ways this should have been a book that I adored. A tale set in 1866 containing mystery, murder, madness, fallen women, I could go on. In many ways the tale that Walter Moody finds himself soon embroiled in after his arrival in the gold mining town of Hokitika, in New Zealand, could fall under one of my very favourite genre’s ‘the sensation novel’. As I started I had the highest of hopes, especially hearing the author loved Wilkie Collins, we were set to be best friends and this book would cement that friendship. Instead I found myself stuck and feeling more and more demoralised as I went on.

I have tried and tried, or struggled and struggled as the case may be, to love or at least like The Luminaries three times this year. The first time I simply read it in big gulps, the chapters initially being (a rather densely packed) 40 pages in length, yet these were taking me ages to read. I kept notes of all the characters and goings on, how the spider’s web was being woven etc, yet still I couldn’t get a grip on it all. So I stopped, it was making me resentful. Then I tried listening to the audio book, this worked until I got a few chapters past my previous pit stop and then as more and more characters and twists were introduced I found myself once again dumbfounded. A few weeks ago I tried again from the beginning -reading a chapter at night, then listening to it again the next day, then reading the next chapter the next night and so on and so on. This got me further but the same issues came up, too many characters, too many twists and I also started to feel like I was being played and not in an altogether friendly way.

Eleanor Catton is clearly a very clever woman, yet something about The Luminaries becomes a little smug along the way. The characters are clearly symbols and pieces of a much bigger jigsaw piece (from reviews like the lovely and normally very patient and positive Rachel have confirmed this) yet for me this was all done at the expense of getting to know them and giving a monkey’s about them. Catton has over 800 pages in this book, I started to feel if she spent as much time fleshing out each character so I started to like them and spot differences in their personalities rather than focusing on retelling and retelling the story from points of view and endlessly describing the scenery I might have got to grips with it. Whilst I understand all characters are there to tell a story or be a part of a plot or a device I am a firm believer that you should never see it. I could see the strings linking the characters to their puppet master (that is simply an analogy, not meant to sound rude) above on one too many occasions and it kept breaking the spell.

Of course the one thing I should remind myself more often is that, like people and music and many other things, we can’t always get on with everything we read. It doesn’t stop me from being really cross when this happens though, the last time it happened  on this scale was with Jennifer Egan’s A Visit From The Goon Squad which oddly enough was a book as equally fawned over whilst I was sat wanting to throw it around the room. Interestingly that book I also went between reading, listening and even using the app – though I finished it maybe I need to learn if I need that much help with a book then it is a lost cause to me. It is horrid to feel like the only one at the party not really enjoying yourself and I wonder if without all the buzz on blogs and social media maybe I would have given up on The Luminaries long before, instead I wanted to join in and so only finally gave up the ghost last week. Sigh.

I don’t tend to talk about the books I don’t finish or why I don’t finish them, but in this case because the book has been such a huge book of the year and because it has taken up so much of my reading time I thought I should, maybe I should more often – though these wouldn’t be reviews, you can’t review a book you haven’t finished can you? I could bring back unreviews I guess, what do you think? Also if any of you have tried or even conquered The Luminaries I would love your thoughts on it be they good, bad or indifferent. I would also love to know about the books everyone else has loved or have reached mass critical acclaim and have left you thinking ‘WTF?’ Ha! Oh, and anything else about giving up books really, not that I ask a lot of you all!

43 responses to “Leaving The Luminaries…”