Hello and welcome to the latest in Other People’s Bookshelves, a regular series of posts where you get to have a nosey at other book lovers bookshelves. This week we are heading to London to join a great blogger, you so need to be following Lonesome Reader if you aren’t already (his reviews are so good I almost want to hate him frankly, Joyce Carol Oates reads it), and great acquaintance of mine Mr Eric Karl Anderson. Myself and Eric have just started a new cultural project for all the pogonophiles and beardy book lovers out there called Beardy Bibliophiles, which launches officially next week both online and in Central London. You have been warned, ha!  So let us find out more about Eric and have a nosey through his books…

My name is Eric. I grew up in Stephen King country (Maine) in the USA, but I moved to London in 2000 and have settled quite snugly into the city having created my own personal library/study. I’ve always been a keen reader. When I was little I loved being read to. I don’t remember this myself but my father tells me that after my first day of school I came home crying. When he asked what was wrong I complained “They didn’t teach me how to read yet.” I can spend ages just staring at my bookshelf. It’s like my own alter/church. I did a Master’s degree in Studies in Fiction, but I’ve always been more about reading for pleasure than academic purposes. I’ve published several things myself including a novel and a scattering of short stories in literary magazines and anthologies. I’m also keen on disaster movies and baking muffins. 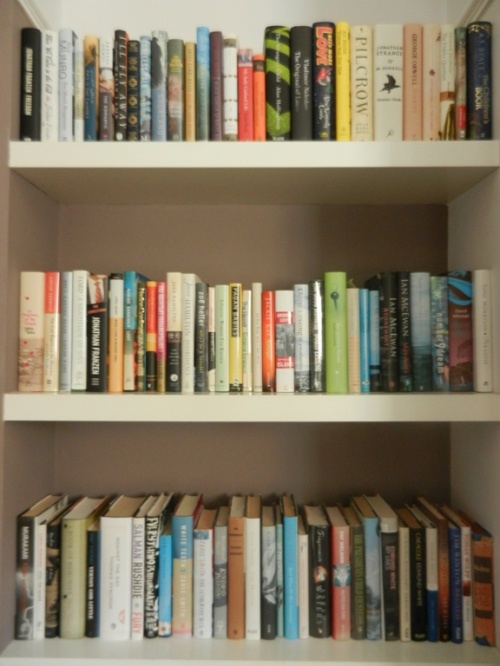 It would be sensible to adopt a one in one out system, but instead I keep trying to cram more in until I’m pressured into making a book cull. Generally only books that I think are particularly brilliant get to stay on my shelves or ones which have been signed or have sentimental value. Most of the books I read are given away to friends or charity shops. A large portion of books on my shelves are waiting to be read, but will probably go once I get to them. These days a lot of the ones which get to stay are more obscure books which I think would be difficult to track down again.

There’s not much order. By my bedside, I mostly keep books of short stories or poems because I’ll sometimes read aloud from these to my boyfriend before we go to sleep. In my front room I keep hardback books together and most of these are signed by the authors. My boyfriend once tried to get me to alphabetize the books in our study. I got as far a D and gave up. I try to keep books by the same author together. I like the general disorder and unusual pairing even if it makes it hard to find something. Book culling is painful, but unfortunately necessary since I live in London and space is precious.

This is really difficult to remember. In the 6th grade my English class had a sort of book club we could join and order books from. That was the first place I started purchasing books from using my allowance money. They were a series of Choose Your Own Adventure books and I particularly liked that they were numbered so appealed to my geeky collector’s personality. All these books have sadly gone with yard sales. There is a new book coming out soon called “The Boy in the Book” by Nathan Penlington which I’m keen to read since it’s about his passion for Choose Your Own Adventure books.

Probably “Delta Style” by Delta Burke. It was a sort of joke gift and I’ve never read it. But I loved watching Designing Women. I didn’t read them as a child, but I have the entire Mr Men series. I think they are brilliant. At my college graduation I announced to the crowd that it was story time and read “Mr Clever” aloud to them. Otherwise, I have published some naughty stories and my author copies of those books are hidden away rather than being displayed.

It’s so hard to choose! My number one would probably be a holograph edition of Virginia Woolf’s “The Waves.” This contains a rough draft of the novel when it was still titled “The Moths” and has her corrections in the margins. It also contains a more recognizable draft of the novel with more of her corrections in the margins. Since “The Waves” is my all-time favourite novel it’s incredibly fascinating seeing the actual process she went through to get to the finished thing. It’s an incredibly rare book.

I think the first ‘grown up’ book on my parents’ shelves that I noticed and really fancied reading was James Clavell’s “Shōgun.” I think I was about 12 when I read it which is fairly young considering the length and subject matter – loosely based on historic battles in 1600s feudal Japan. I absolutely loved and devoured it. 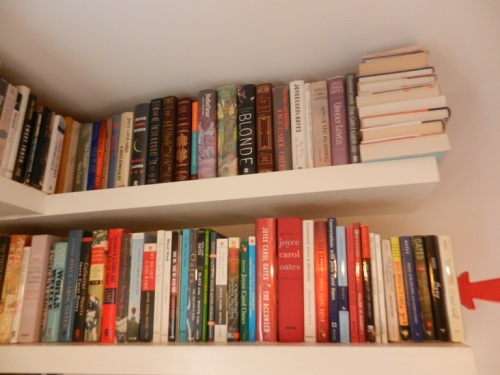 Although you didn’t mean it that way I’m going to tell you anyway. The first ‘grown up’ scene I remember reading in a book was Stephen King’s “The Eyes of the Dragon.” It’s the wedding night where a king married a girl who is somewhat baffled when he undresses. She asks him what that thing is and he replies “It’s my purple-headed warrior.” This made me giggle endlessly and was my first introduction to a bad sex scene.

Even if I love a borrowed book I’ve read I’m usually happy to give it back because of limited space. But if I’m really wild about it I’m more likely to sneak it on my shelf and keep “forgetting” to give it back. That’s wrong, isn’t it?

The last book which has gone on the shelves and will be staying there is Jim Crace’s novel “Harvest.” It’s an absolutely beautiful book and I had him sign it when I went to the Booker Prize readings last year. I’m somewhat glad I read what turned out to be the winner “The Luminaries” as an e-book as I would have wanted to keep this on my shelves as well. I’ve bought and received plenty of books since acquiring “Harvest” but I don’t think they’ll be staying on the shelves forever.

There are lots of “classic” books I’d love to house on my shelves, but there just isn’t room for them and I know they are easy to acquire should I feel inspired to read them. I’ve read several novels electronically which I’d love to have on my shelves, but the truth is that there just isn’t room. Of course, if I ever get a Beauty & the Beast size library I’ll immediately be filling it up with physical copies of all these e-books.

Everyone has different standards they hold people up to when considering their reading tastes. Considering what’s on my shelves they would probably accurately think that I have a taste for contemporary literary fiction as well as first time novelists and slightly more experimental fiction. I have two shelves overflowing with Joyce Carol Oates books so I bet they’d be able to guess my favourite author.

A huge thanks to Eric for taking part in Other People’s Bookshelves, I am very excited about next weeks beardy bookish get together. If you are in central London next Thursday and fancy a natter do check the website to see how you could be there with a bookish beardy beverage. Anyway… Don’t forgot if you would like to participate (and I would love you to – hint, hint, hint) in the series then drop me an email to savidgereads@gmail.com with the subject Other People’s Bookshelves, thanks in advance. In the meantime… what do you think of Eric’s responses and/or any of the books and authors that he mentions?