Hello and welcome to the latest Other People’s Bookshelves, a series of posts set to feed into the filthy book lust/porn and either give you a fix of other people’s shelves to stave you off going on a buying/borrowing spree, or making you want to run and grab as many more books as you can. This week we head ‘oop North’ (not too far from me, so do pop by after) to join Ruth between bike rides. So let’s all grab a cuppa and get to know Ruth better as we have a nosey through her bookshelves and reading life…

I’ve spent most of my twenty five years in the North West of England, at present in Lancaster having escaped from Burnley, where I grew up. Reading has been my love ever since I was taught how. Once I could read I grabbed anything that had words in order to get my fix. I’d like to say that I am more selective now than I was then, but I think that I will still read anything that I can get my hands on. When I’m not absorbed in a book then I will be out cycling. Sometimes I wonder which I enjoy more, the reading or the cycling. If I could work out a way to do both at the same time then I would die of happiness. 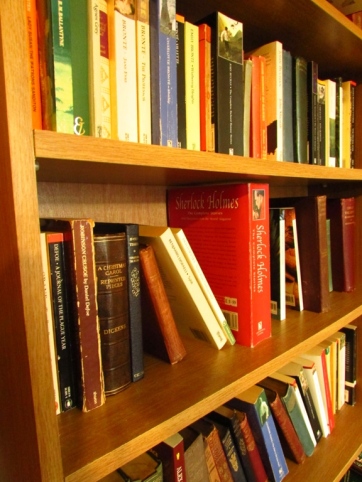 All my books go on my shelves. Well, that’s not true, I’ve run out of shelf space so there are towers of books growing up all over the place. I try to confine them to my room, but they seem to be springing up all over the place. Also if I buy a duplicate of a book by mistake (happens more frequently than I would like to admit) the duplicate is banished to a box before it goes to a new home. I’ve created a spreadsheet of my books to try and prevent this from happening, an idea I stole/borrowed from my housemate.

They are separated loosely by genre and then alphabetically by author. I read them in that order too, I know it’s mad, but it takes away the horrible feeling of having to choose a new book when there are so many to choose from. Breaking the system is allowed, but only if there is a very good reason. I’ve thought about culling, mainly because if I don’t stop buying books soon, I will run out of space. When I have thoughts like that I do something to distract myself and the thought soon goes.

Probably When Hitler Stole Pink Rabbit by Judith Kerr. I remember buying it when I was eleven just before we moved half way across the country. It was a comforting thing having a new book when everything else was in a state of chaos. I bought it with a gift voucher that I had been given as a leaving present from my church. Book vouchers are the best presents to get, they chose well! Clearing out my stuff from my parent’s house I found it again, about a year ago, and have brought it back to a prominent place on my bookcase.

My Redwall series by Brian Jacques is probably the only set of books that I would feel slight embarrassment about. Only slight though. I loved them when I was a child and intend to read them through again one day. There’s something about mice in a medieval setting that just can’t be beaten. 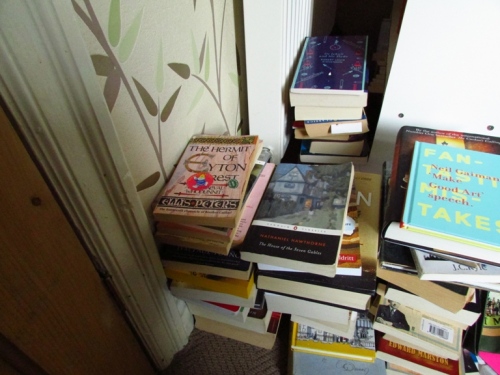 I suppose the obvious ones would be the novels by Alexandre Dumas that have collected, just because I’ve spent so long finding and collecting them. If there was just one book to save it would be The Whitehouse Boys by R. A. H. Goodyear. I have no idea what it is about but it was a present from my great grandmother to my dad. In the front it says To Derek, wishing you a happy xmas from Nanny and Uncle Tom xx. One day I will get round to reading it.

When I was younger I remember my parents watching a BBC adaptation of Martin Chuzzlewit by Charles Dickens. What I saw I enjoyed and then I saw a copy of the book hidden away somewhere. I think that must have been the first book that I really wanted to read and it annoyed me that I couldn’t. It may also have been one of the books that I have enjoyed the most, just because I had finally expanded my reading ability enough to be able to read it. No book was out of reach after that.

For most books, probably yes, but I’m trying not to because I’m worried that I will run out of space. I haven’t been very successful yet though.

The Divine Comedy by Dante, but that will probably have changed within the next twenty four hours. I bought it because it is a book that I have heard a lot about but never had the opportunity to read. Also it was only a quid.

I would like to complete my Dumas collection, but not all of them have been translated into English. I may end up learning French so that I can read them all. Other than that I’m looking forward to getting a copy of the new Lauren Oliver book that is out this year.

They would probably think that it is quite eclectic, given how many different genres I can have on one shelf. I’d like people to think that I was well read, I keep my classics on view partly for that reason (I also like looking at them).