Hello and welcome to the latest Other People’s Bookshelves. If you haven’t seen it before this is a series of posts set to feed into the filthy book lust/porn and either give you a fix of other people’s books and shelves. This week we are off to spend some time with author Claire Fuller, whose debut Our Endless Numbered Days has just come out and will be one of the books I will rush to when I finish judging Fiction Uncovered. So anyway, let’s settle with a nice cup or glass of something and find out more about her…

I live in Winchester, occasionally with my teenage children (when they’re not at university or with their dad) and my husband, Tim, who’s a university librarian. I studied sculpture at art school in the 1980s, and still get my chisels or my pencil out now and again. But mostly I’m a writer. Our Endless Numbered Days (Fig Tree/Penguin) is my first novel and I also write a lot of short stories and flash fiction, most of which are posted on my website: www.clairefuller.co.uk. I read a lot: before I get up and before I go to sleep, and I have one of those contraptions to hold my books open so I can read at the table while I’m eating. 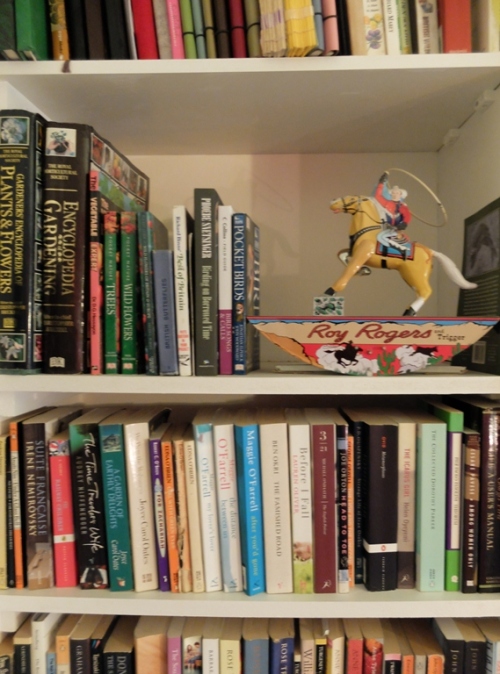 In the last couple of years I’ve let myself give up on books I’ve not been enjoying, and these ones go to the charity shop. All other books get kept. Luckily, at the moment we have spare shelf space – my husband recently built some more shelves – so keeping books isn’t a problem. When I’ve finished a book I leave it on the dining-room table and it gets mysteriously filed away. It’s like one of those returns trollies they have in real libraries. I’m not sure what we’ll do when all the shelves are full. Build some more?

Three and a half years ago, Tim moved in with me, bringing with him over two thousand books. I must have owned five hundred, and we spent about a week sorting them all and when we came across duplicates, deciding which one to get rid of. The only book where we kept both copies was The Heart is a Lonely Hunter by Carson McCullers because before Tim moved in we’d both read it at the same time. I’ve always liked the idea of having my books filed properly so I could easily find things but I never got round to it when I lived on my own. But now all the paperback fiction is organised alphabetically, non-fiction is by genre, and hardback fiction has its own shelves because of the size issue. Like I said, I leave the filing to Tim, because I haven’t got the patience to move everything along in order to squeeze in a new paperback.

I think it was probably Freefall by William Golding. I won the art prize at school a few times for which I received a book token, so I would go to my local bookshop in Thame, and browse. I probably chose it because of its cover. The bookshop used to be called The Red House; it’s still there but it’s now The Book House. I still have the original copy of Freefall, but I can’t remember anything about the story. I should probably re-read it.

[Simon – the photo of the Scrabble dictionary (above) is to go with this answer] There’s nothing on my shelves I would be embarrassed by, or at least if there is, I’m hoping it will disappear through sheer quantity of books. Although, I’ve just remembered that I do have a book which lives in a drawer. It’s put away not because I’m embarrassed by it, but because of the state it is in. I really should buy another.

My first choice, if I’m allowed, would be the book my daughter wrote when she was about four. Actually, she dictated it rather than wrote it and she drew the pictures. She also made the jacket for it out of clay, which is not very practical. It starts, ‘The fairies lived on the mountain’. But of the published books I own, that’s such a hard thing to choose. Perhaps one of those my Dad bought me when I was a child (The Pocket Oxford Dictionary from 1975 or Complete Poems for Children by James Reeves, illustrated by Edward Ardizzone) or the first paperback American publication of We Have Always Lived in the Castle, by Shirley Jackson, which Tim gave to me.

My Dad was in a mail-order book club when I was growing up in the 1970s, and I remember the excitement when the parcel arrived. I doubt this came from the club, but the first book I remember reading from his shelves was Small Dreams of a Scorpion by Spike Milligan. I must have been seven or eight. This isn’t a funny book; it’s full of sad poems about Milligan’s depression and hospitalisation and I can still recite some of them today. My Mum, who’s German, had very few books, but there was one she kept from her time when she was a nanny. It was a book about childhood illnesses and it was in German, so I couldn’t understand it, but I remember poring over the vivid and gruesome photographs of boils and rashes.

I do sometimes borrow books from the library and those that I love I always mean to buy so I can read them again, but then another book comes along and makes me forget. Like Waterlog by Roger Deakin; I wish I owned that.

It was Aquarium by David Vann. I was lucky to be sent an advance copy by the publishers – one of the perks of being a writer. This is one I’ll definitely be keeping. Tim has filed it away beside all the other David Vann books I own.

I’ve met lots of lovely debut authors since becoming one myself, and I’d love to get round to buying and reading all of their books. Some I have read, and others have made it as far as my ‘to be read’ list, which is a start. To name a few – The Ship by Antonia Honeywell, Summertime by Vanessa Lafaye and Ridley Road by Jo Bloom.

Someone perusing my shelves might think I know a lot about French film, read many works of Scandinavian fiction in which nothing much happens, and that I have a love of the nouveau roman movement from the 1950s. But unfortunately they would be getting me muddled up with Tim. If they knew which books were mine they might think I read fairly broadly – contemporary authors, some narrative non-fiction, many books from the past forty years – but that I could probably try harder with the classics. 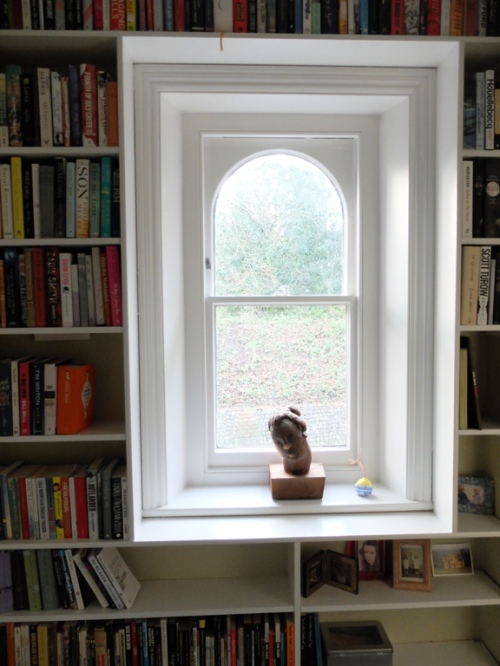