The Baths of Aphrodite, Cyprus

I mentioned a while back that I wanted to do more things on whim so I decided that this should be the case on this holiday to Cyprus with the beard and so instead of joining the various day trips out supplied (note – at extra cost) on this trip I insisted that we hire a car and go off on our own whimsical adventures. The first of which was to the opposite side of the island to the Akamas National Park and mountain range to find the Baths of Aphrodite.

Aphrodite is everywhere on this island, in fact it’s become something of a joke with me and The Beard that everything secretly has Aphrodite in front of it from chemists to public restrooms, however she was born from the foam at the seas edge here so you can’t blame them can you? But the idea of seeing the place she bathed (below a palace, we mere mortals cannot see, on the surrounding mountains) and where she and Adonis met was just too tempting. It seems the classicist roots from my mother are still in my blood. And so off we headed and found the grotto in question.

I wasn’t as bowled over by it as I expected to be (we’ve slightly more delectable grottos in my hometown of Matlock Bath) this still didn’t stop us both using the water on our skin for its magical youthful properties which are supposedly magical.

As the sun was out and the surrounding area was an abundance of flowers, butterflies, lizards (two massive ones), goats and stunning views of the sea we decided to follow the Aphrodite trail to a temple above and an oak tree where she would sit and contemplate the world both mortal and godly. And 7km isn’t far is it?

Well it turns out when it’s up a mountain over rocky terrain it is but wow were the views worth it. I actually said at one point that I felt like I was up the beanstalk in the land of the Giants. 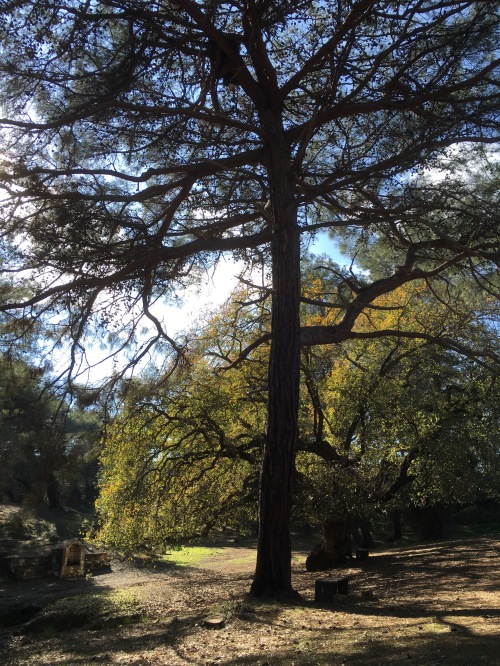 I could completely understand why people felt that this could be the home of the gods. And then we turned a corner and it got even better…

Just amazing. We sat and just watched the world in all its quietness and stillness for quite a while just taking it all in. We then had to get back down which involved some interesting manoeuvring following mountain goat paths and looking like graceless goats, of which thankfully there is no photographic proof. We had to remember to watch our step and not just stare at the scenery till we fell off the precipice. A hairy scary but stunning decent down where bar four other walkers we saw no one. It felt like we were the last people on earth. And we quite liked it.

Quite the start to the holiday. Heartily recommend it if you are ever in Cyprus.

Tagged as Cyprus, Random Savidgeness, The Baths of Aphrodite

3 responses to “The Baths of Aphrodite, Cyprus”