As well as introducing me to some debut and/or brand new to me authors reading all of this years Baileys Women’s Prize for Fiction longlist has brought me a couple of authors that I have been meaning to read for a while. The first of those is Elizabeth Strout whose Pulitzer prize winning Olive Ketteridge I have been meaning to read for ages and ages since the much missed Granny Savidge Reads read it and raved about it years ago. Her latest, My Name is Lucy Barton, was also one of the most ‘guessed’ and rated books before the official longlist came out and so I was intrigued. 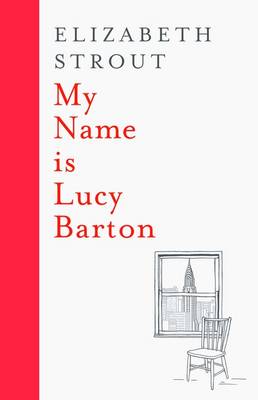 After a slow recovery from what should have been a relatively simple operation and recuperation Lucy Barton wakes one night to find her mother, who she has not seen for years, sat at the end of her bed. This is something that Lucy finds wonderful, baffling, terrifying, thrilling and worrying, how do these two women relate to each other after so many years apart and after so much has gone unsaid?

“Hi, Lucy,” she said. Her voice sounded shy but urgent. She leaned forward and squeezed my foot through the sheet. “Hi, Wizzle,” she said. I had not seen my mother for years, and I kept staring at her; I could not figure out why she looked so different.
“Mom, how did you get here?” I asked.
“Oh, I got on an airplane.” She wiggled her fingers, and I knew that there was too much emotion, for us. So I waved back, and lay flat. “I think you’ll be alright,” she added, in the same shy-soundingbut urgent voice. “I haven’t had any dreams.”

After an initial read of the book, which at a compact 200 pages can be done in one sitting, it would be easy to simply say this was a concentrated and heightened fable of the relationship between a mother and daughter. In many ways it is. It is also much more than that as Lucy’s mother’s random appearance brings back many memories and stories of her youth, many of which are unsettling rather than happy. It could also be seen as a novel of a women’s journey to becoming a writer, what inspired her and what compelled her from a young age (mainly escapism through books). Now I have to say that I am not a fan of novels about novelists, so many clichés, however as with Graham Swift’s recent Mothering Sunday, this won me round as it isn’t the focus of the book, rather another layer.

My teacher saw that I loved reading, and she gave me books, even grown-up books, and I read them. And then later in high school I still read books, when my homework was done, in the warm school. But the books brought me things. This is my point. They made me feel less alone. This is my point. And I thought: I will write and people will not feel so alone! (But it was my secret. Even when I met my husband I didn’t tell him right away. I couldn’t take myself seriously. Except that I did. I took myself – secretly, secretly – very seriously! I knew I was a writer. I didn’t know how hard it would be. But no one knows that; and that does not matter.)

What the real focus of the book is actually tries to evade our eyeline directly unless we catch it unsuspectingly and that is the story of Lucy’s childhood which she doesn’t seem to want to tell us about. This also happens with Lucy’s failing marriage, yet unlike that which she can hide her memories from childhood start coming to the fore without her expecting them or being able to lock them away again as quickly as she would like. We soon discover that Lucy grew up living in impoverished and difficult circumstances, people thought she and her family were trash and they became outcasts, something she wanted to escape.

When I was a child, our family went to the Congregational church. We were outcasts there as much as anywhere; even the Sunday school teacher ignored us. Once I came late to the class, the chairs were all taken. The teacher said, “Just sit on the floor, Lucy.”

Yet as we read on there is another layer amongst that. Deep down are memories of really dark times not inflicted on the family but by them, we only get some glimpses of them but they are there all the same. Strout, through Lucy’s seeming denial, leaves it for us the reader to work out what they are and if this is why Lucy Barton has become so estranged. It also asks the questions as to whether blood is thicker than water and how we cope with having to love someone as they are our parent, with all their failings and even with some serious hatred towards them for some things they have done. How do we then cope with that when they are gone?

There is also something slightly fairytale (both the happy and the horrid elements) and surreal amongst the cracks of this novel too. I love fairytales and you may think I can spot them in every book I read, not always honest but I could in this one. First for me was sudden arrival of Lucy’s mother, for a while I spent quite a lot of the beginning thinking she was a ghost or possibly a post surgery drug induced hallucination, especially when she starts to talk about having not had any bad dreams so all will be well. Then there is the slight Cinderella element of rags to riches. Mostly though it was the monsters lurking in a woman’s memories that made me feel like that, we mainly glimpse them, we know they are real and yet they seem other because of the way Lucy is dealing with them, or not. Naturally this compelled me further.

My Name is Lucy Barton is a deceptive book, both in its size and in the story it tells. I devoured it in a single sitting and it affected me, however since I have read it the affect has grown and grown and bothered me more and more. It is the kind of book that you need to read, digest, walk away from, digest some more and then at some point go back to. It’s affect has grown on me as much as it has grown in my estimation the more and more distance I have had from it. It’s a book that lingers much longer than you anticipate. Looks like I need to head to some more of Elizabeth Strout’s books now doesn’t it?

10 responses to “My Name is Lucy Barton – Elizabeth Strout”