The Optician of Lampedusa – Emma-Jane Kirby

When I was in London back at the start of the month I popped into the Tottenham Court Road Waterstones, which is fast becoming one of my favourite bookshops, and was drawn to a table displaying a pile of books with £5 of the cost going to Oxfam if you bought it. I didn’t really need to know more than that to buy it, partly because I never really need that much of an excuse to buy a new book and also because Oxfam is a charity I believe in. The then unknown book to me was Emma-Jane Kirby’s The Optician of Lampedusa and I think, having read it and cried through it twice, it might be one of the most incredible books, and most important books right now, that I have read in some time. 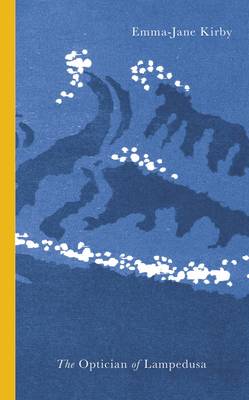 It is around this sentence that The Optician of Lampedusa begins, through Emma-Jane Kirby, to tell his tale. He is a regular man on the island of Lampedusa where he works as an optician. He is known and well liked by those on the island and likes to socialise but mainly him and his wife keep themselves to themselves and with dinners or trips away with friends. He wants a simple life, yet on one boating trip away with his friends, not too far away from home at all; their lives all change on a single morning.

When it came this time, the monstrous, tortured howl ripped through everyone like a bullet. Instinctively, the optician moved his hand to protect his face. He staggered to keep his footing on the cabin roof. What the hell was out there?
The howl mutated into an unbearable screeching. The optician felt his stomach knot. Something was roaring underneath the waves and whatever it was the optician had a gut feeling that when they found it, it would be truly terrible. He forced himself to regulate his breathing and tried to nod reassuringly at Teresa who was looking at him in horror.

What we then experience is the optician’s account of what follows when he and his friends come across a mass of people, alive and dead, after the sinking of a boat on which they were all trying to escape heading for Europe. And through the optician’s account, which I have little doubt Emma Jane Kirby deviated from at all as it seers its self into your brain, we are given an unflinching, horrifying look at what the refugee crisis is like first hand from someone who thinks of themselves as ordinary but is to many a hero. I found it hugely affecting, both the description of the awful day when they found the refugees and also what happened to them and the refugees afterwards which we follow. I don’t want to talk about what happens after because I think you need to read it all to experience it.

I have never seen so many people in the water. Their limbs were thrashing, hands grasping, fists punching, black faces flashing over then under the waves. Gasping, yelling, choking, screaming. Oh God, the screaming! The pitch of it! The sea boiling and writhing around them as they kicked and lashed out, clinging to each other, grabbing at pieces of the driftwood, snatching handfuls of water as they tried to clutch the tops of the breakers.

As much as this book is (rightly so) shocking, it gives the reader much food for thought on many thing. One of the most powerful things being that this is not fiction that we are reading, this was very much someone’s real life, one person in many whom have come face to face with what is going on. Emma-Jane Kirby is a journalist for BBC Radio 4’s PM show where she reported on the Mediterranean crisis and indeed focused the story on Carmine Menna, who we learn at the end (well those of us who didn’t hear the reportage – I am feeling slightly appalled at myself for having missed it) is indeed his story. So the unflinching reality is literally jaw dropping. As I said earlier it has made me cry several times on several reads of it.

It is with this in mind that I think Emma-Jane Kirby points out something very important, just how numb we become to the news. When we hear or see a story on the news, on or the front pages, we are horrified and outraged. Yet really how much do we actually do about it apart from then discuss how horrified and outraged? We slowly but surely become numb to it, and this indeed is the case with the optician himself, living life on his island knowing it is happening but in some ways becoming used to it, until it then stares him full on in the eyes.

Twenty years ago, when he could run the island’s roads effortlessly, the optician of Lampedusa would sometimes spot a scared migrant scrambling up the rocks onto his path. They had almost always been alone and would shout to him in English: ‘Where am I? Am I in Palmero? Have I reached Sicily?’
He shakes his head in disbelief. It seems a long time ago now. The Arab Spring changed everything and they never come on their own anymore. Big boatloads arrive now in a constant stream – whole families; women and children too, poor things. Only a couple of years ago the newspapers were reporting that Lampedusa now had more migrants and refugees than inhabitants! The skin on his forehead wrinkles. Best not to think too much about it really. The TV, the papers – they’re saturated with the news about migrants; it’s all they talk about. There was something else on the radio the other day about some more drowning off the coast of Sicily. Seven or eight of them, was it?

And of course we can’t all rush off and go to the places that this is happening to help out, that is not what I or this book are saying. I am after all still sat in my house on my sofa typing this after having been moved so much by the book. Yet buying the book has sent some money to help, reading the book has opened my eyes to the refugee crisis both in terms of reading it so viscerally from an eye witness, well through an eye witness through Emma-Jane Kirby, and to aspects of it I didn’t know and led me to looking at ways I can do small things to contribute. I won’t go on about those because I don’t want to preach, part of my effort is to hope some of you will read this and rush off to Waterstones to buy it before the end of the month so more of those £5 wing their way to Oxfam and the refugees who need it. (If you haven’t a Waterstones near you just get it and read it anyway.)

I guess I have kind of digressed from the book here, yet I think that The Optician of Lampedusa is the sort of book that makes you do that. The optician of Lampedusa himself did something extraordinary that saved lives, Emma-Jane Kirby reported on it and wrote the book to share the story and awareness and get other people to do the same, that is now what I want to do with this review, even if it is just one or two of you rushing off to get it. That is where a book like The Optician of Lampedusa is so important, and reminds us how powerful books and people’s stories can be in making us see the reality of things and do what we can to help.

6 responses to “The Optician of Lampedusa – Emma-Jane Kirby”