Many of you who’ve been visitors here a while will know that I moved to Manchester at the end of 2010 during a very turbulent time in my life. I was welcomed, distracted, rebuilt and made incredible friendships, some will be life long. So the news last night devastated me for the city, the people (especially as it seems to be people so young) and there loved ones. I just wanted to leave this poem by Adam O’Riordan here for people to understand the Manchester spirit and why I love it and it’s people so.

David France wins The Green Carnation Prize (And You Could Win It!)

So as many of you know, I cofounded a prize called The Green Carnation Prize which celebrates LGBTQ+ writers and their fantastic books be they fiction, poetry, memoir, graphic novel, short stories or non fiction. Well the winner has not long been announced AND as I am feeling full of the Green Carnation spirit I will be giving a copy away at the end of the post, but first here is all you need to know about the winning book which was chosen from an INCREDIBLE shortlist… 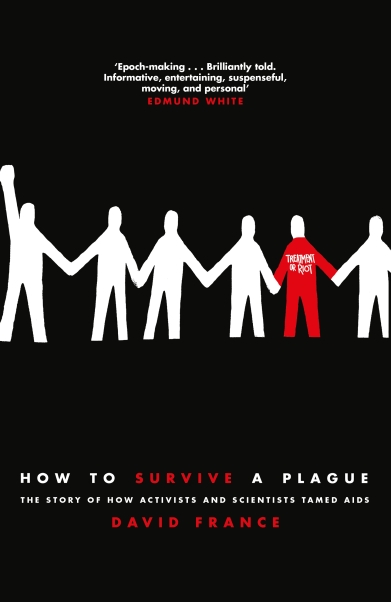 The Green Carnation Prize today announces David France’s insider account of the AIDS epidemic, How To Survive A Plague: The Story of How Activists and Scientists Tamed AIDS, as the unanimous winner at a ceremony hosted by Foyles in London, UK.

The third non-fiction winner in the Prize’s seven-year history, France’s book was up against a shortlist that also featured Stella Duffy, Garth Greenwell, Kirsty Logan, and Kei Miller. First released as a film in 2012, How To Survive A Plague was dedicated to France’s partner Doug Gould, who died of AIDS-related pneumonia in 1992, and went on to be nominated for best documentary in 2013 Academy Awards.

Double Emmy-nominee, France, an investigative reporter and a chronicler of AIDS since the early 1980’s, used his unparalleled access to the community to share the story of the AIDS epidemic and the grassroots movement of activists, many of them facing their own life-or-death struggles, who grabbed the reins of scientific research to help develop the drugs that turned HIV from a mostly fatal infection into a manageable disease.

Chair of judges and internationally acclaimed author John Boyne said: ‘In this time of renewed activism in an increasingly uncertain world, France’s definitive account of the AIDS crisis and the activists who changed the fate of so many lives, seems vital and important to inspire everyone, not just the LGBTQ+ community. We couldn’t be prouder to choose this book as the rightful winner.’

Simon Heafield, Head of Marketing at Foyles, said: ‘I’m so glad to have another excuse to recommend David France’s magnificent book to Foyles readers. This essential and inspirational account of one of the darkest periods of recent history is also a breathtakingly riveting read, full of unforgettable characters. This is arguably one of the most important books published in 2016, and a very deserving winner.’

In addition to his trophy, France also received a bottle of champagne and his winning book will receive national in-store promotion across Foyles bookshops. Now in its seventh year, the Prize, with the support of Foyles, seeks to champion the best writing by an LGBTQ author in the UK. It is a vital recognition and celebration for books as diverse as the community it represents and unified by a common thread: sheer quality of writing.

Simon Savidge, Director of the Prize, said: ‘I am delighted that David France has won The Green Carnation Prize with this incredible and important book. We have made many steps forward in the 50 years since the decriminalisation of homosexuality in the UK, however some of the voices of our history have often been silenced. I hope this book will enlighten people, make them question what they think they know and encourage discussion. That is what every great book does.’

Previous winners have included Patrick Gale, Catherine Hall, and Christopher Fowler. Last year, following the highest number of submissions to date, the Prize was awarded to Marlon James’ A Brief History of Seven Killings. Upon winning the prize, James said: “Six years ago I wouldn’t have been able to voice that I was LGBT, so to be recognised for that and for work the judges felt was great is fantastic.”

So there you have it. I now instantly have to start thinking about next year’s prize, well maybe after a few celebratory shandies. Before that though I promised you the opportunity to win a copy of the book. So how can you? Well simply leave a comment below telling me what your favourite LGBT book is and why by the 1st of June and I will select one entry from anywhere in the world and email you and send it over. That simple. So go for it and good luck!

Catching Up With a Cuppa or a Costa…

So another month or so goes by and after promising to get the blog up and running and back in business, I haven’t. I am a dreadful sausage and should be ashamed. Well I am ashamed if I am honest, I am not going to apologise too profusely as a) I already have several times b) you can’t spend your whole life apologising for being busy can you? For I have been busy, very busy. There has been work where I have taken on another person’s workload because they have gone on maternity and I have also been part of the recruitment plus planning for the next year… exhausting. Then there has been all the bookish stuff which is frankly much more likely to be what you want to hear about isn’t it? Grab a cuppa this could be quite a post, ha.

So what have I been upto? Well… Firstly I was reading all of the Baileys longlist. As many of you know I don’t half love the Baileys Women’s Prize for Fiction and so I was reading the longlist before the shortlist was announced which was quite a mission as even though there were 16 books instead of 20 it was still tough going. It does mean I have loads of wonderful books to talk to you all about though in the next few weeks and months (I may even cheat a bit and backdate some of them, ha naughty) which I am looking forward to.

Secondly I have been getting The Green Carnation Prize all sorted and the admin behind the longlist, shortlist and winner (which will be announced a week today) and the finale party. The judges have been amazing and the wonderful Maura Brickell has been a diamond organising things so really this year it has been minimal and I have felt slightly distanced from it but both long and short lists were wonderfully received, so I am thrilled. I am even starting to look towards next year. Have I read the shortlist? No, only one of them which is shameful isn’t it. But sometimes is it about time, which leads me on to the third and fourth things I have been upto.

Well actually I am a slight tease because one I cannot talk about until June, so let’s put the third on whole. The fourth though is amazing because (and many of you may have seen me explode with joy on Twitter) I have been asked if I will be one of the judges on one of my favourite book prizes. Can you guess which one it is?

Yes, it is the Costa Book Awards!!!! I am beyond excited and still think they might have had one too many coffees when they asked but I am running with it. I can’t tell you which category I have yet, I can say it is one that I am thrilled about and cannot wait to get reading. More in due course. Of course this does mean things might change with the blog as I can’t talk about the submissions I don’t think, however as I have been so shoddy with review since Christmas (ok and possibly a bit before) it does mean I have a stack of other books I can chat to you about. It’s almost like I planned it, in fact let us pretend I did. Ha.

Penultimately, fifthly, I have been doing lots of house and garden sorting. The library has been a slight nightmare but more on that in a future post, it is getting there now though and the lounge, dining room, bathrooms and master suite in the attic are all looking lovely. As is some of the garden, some not all.

Then finally, the sixth reason for being so bonkers busy, is because I have been doing quite a few events (I am wondering if I should have an events page on here?) with the likes of Paula Hawkins, Sarah Schmidt, Patrick Ness and Natalie Haynes over the last few weeks PLUS I have been quite a social butterly. I know, what happened to the man who liked to hide form the world with a book on the sofa or in bed? Well he has been up and down to London, had guests staying and been on a wonderful weekend in Kent. There are a couple more balmy weeks before June (do you want to come on some of these trips with me, would it interest you?) So it really has been quite busy. Oh and I have a wedding to plan, how do I forget that?

So that is me, what have you all been upto? I would love to know, let’s chat in the comments.