One of the things that I miss about London, and something I would like to address ‘oop north’ in Liverpool if I could get ten minutes, is the literary buzz that runs through the city. I don’t just mean all the famous author living or dead, or the infamous sights, sounds and streets that they write about; I also mean the fact that on almost any given night you will find something wonderfully booky going on in some lovely venue somewhere in the city.

Thanks to the lovely Will who is now Community Manager at Vintage Books, I was invited to such an event called Speakeasy at Drink Shop Do, one of those lovely shops selling gifts (like tea towels, bags, candles, cards and knickknacks that I never knew I wanted until I walk in and promptly need them)  and upstairs has a cafe-cum-bar (careful how you say that) and disco room. I do not know who had this idea but they are a genius – could they please identify themselves and open one in Liverpool instantly that I can run. Anyway tonight was all about ten readings from ten authors whose books look set to cause quite a lot of chatter in 2015, hosted by the very funny and lovely duo comprised of Ian Ellard (who I believe works for Faber) and Tom Pollock (whose books you may have read, I know I have been recommended them by many of you).

So who were the authors and what were their books about I hear you cry, desperate for me to get on with it so you can go and see if you want to read their books. Well thanks to modern technology I was able to sneakily take some snaps of the authors, which came out rather snazzily like silhouettes that some really amazing photographer would take hours to conjure. Coughs.

First up, as her surname came first, was Emily Bullock whose debut novel The Longest Fight is inspired by her grandfather and is set in 1950s South East London in the gritty and violent world of boxing. Now boxing is probably somewhere not far behind boats and horses in my idea of what I would like in a book, Emily’s reading created a real tension in the room as her protagonist faced the ring and actually hooked in me, right on the chin (see what I did there?) 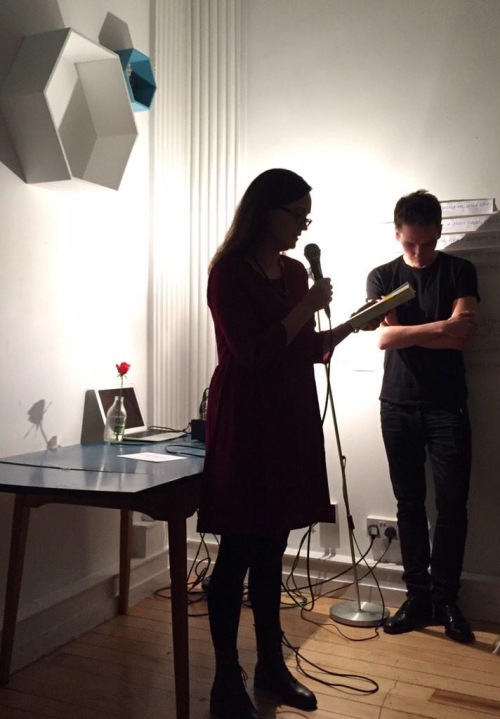 Alex Christofi was up next and broke the tension with a very, very funny reading from his debut Glass, which is currently getting a lot of buzz in all the right places as an off-beat comedy about a young man finding his way in the modern world, oh and window cleaning. If the whole book has the sense of humour, which was darkly and ever-so-slightly wrongly funny, we witnessed the whole way through I think it will be right up my street.

Nicci Cloke was up next to read from her second novel, Lay Me Down. Set in San Francisco, it follows a couple, Jack and Elsa, as they struggle to adjust to the extraordinary demands of Jack’s job on the Golden Gate Bridge. Apparently it is also a tale of suicide. Nicci is one of the Vintage authors and so it was in part thanks to her I was there.

All rules of alphabetic order were thrown caution to the wind as Rebecca Whitney (who might have had an early train to catch) read from her debut The Liar’s Chair, which sounded right up the alley of Gone Girl fans like myself as it asks: What if the thing you were most afraid of was your husband? Her reading was genuinely creepy, so I need to get my mitts on that.

Antonia Honeywell was the next person to stand up (next to Ian Ellard who is in all these pictures and gives very good ‘listening’ face, I tend to stare at my shoes or idly pick at fluff on my top when an author is reading when hosting events) and read to us all from her debut novel, The Ship. Yes, you guessed it a book on A BOAT! I have to say though if anyone is going to get me reading a book on a boat in 2015 it will be Antonia. Enough about me, the story… Sixteen year old Lalla’s father has a plan to escape London which has gone into meltdown: he will captain a ship big enough to save five hundred worthy people. But what is the price of salvation?

Den Patrick was up next and read from The Boy Who Wept Blood which is a follow up to The Boy With the Porcelain Blade. I do not know anyone who has yet to tell me they didn’t like the first so this is a series I need to do some more investigating on. In other news Den Patrick looks very like Matthew Goode out of Hollywood, you can’t tell this from my picture but it is true.

Peter Swanson was up next with his second novel The Kind Worth Killing. Now by this point I might have had too many sherries or too many Haribo from lovely china cups, I swear that he introduced the book as being about someone who feels his wife should be killed and so does she… yet that doesn’t sound right. Either way he made me want to read it and I have his first novel The Girl With a Clock for a Heart on my shelves already.

Ruth Ware was the second of Vintage’s authors up and was reading from her thriller In A Dark Dark Wood which is set around a hen weekend which goes horrendously wrong and a secret between some of the women that seemed to have been left in the past, hasn’t. This isn’t out until the summer so we will have to wait with baited breath. Note – I have included a shot of Tom Pollock in the background of the photo below to a) prove he was there b) show you his very good listening face.

The penultimate reading was from David Whitehouse, whose debut Bed I absolutely loved when it came out and yet never reviewed because I am a tool. His new novel The Mobile Library sounds like it will be just as wonderful, I mean from the title you can tell it will be about bookish adventures and so any book lover wants to read it regardless of whether I tell you more or not. So I won’t. I will say in just a few pages that David read he does humour and heartbreak brilliantly well.

Last but not least was Shelley Harris, another author whose debut I really liked but didn’t review because I am a loon – though I did share her bookshelves, reading from Vigilante which also sounds right up my street. After stumbling into a vigilante rescue one night, Jenny Pepper decides to become a hero – but with frightening consequences. Now as a lover of superhero’s, and just from Shelley’s prologue, I cannot not read this at some point this year. 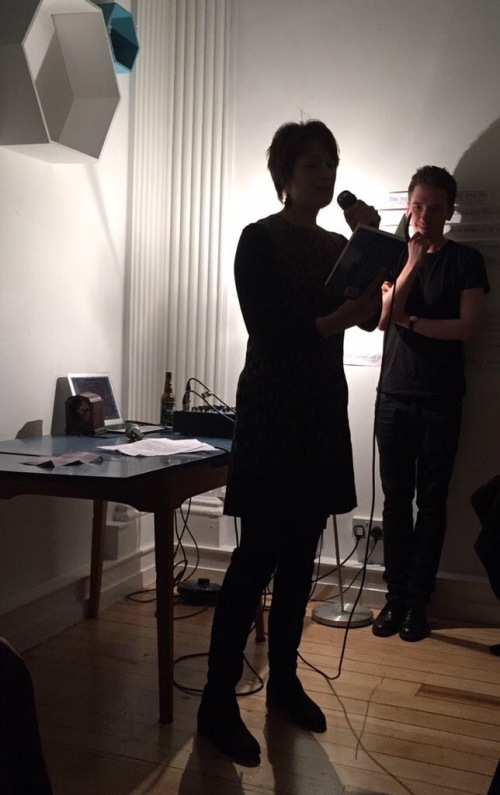 So there you have it, ten authors whose books I would highly recommend you read if you haven’t already. If that wasn’t enough I also got to see lots of lovely faces from the blogging world. Will and I have been meaning to say hello for years, also on my table were my mates Kim, Rob and Kate plus I got to meet Sanne, Naomi and Jim for the first time as well as the lovely Nina.  Oh and Anna from the We Love This Book. Then there were the aforementioned authors who some of came and said hello, as I was being my usual wallflower like self, as did Stuart Evers who was also in attendance. Plus from the land of publishing the lovely Sam and Francesa from Picador and Drew from Serpent’s Tail. It was quite a first night in London Town. A huge thanks to Vintage Books and especially the lovely host with the most Will for inviting me and looking after me so well!