As this goes out on the blog, tonight will see the winner of the Baileys Prize for Women’s Fiction 2017 announced. In a break with tradition on the blog, I decided that instead of telling you all about the shortlist (though I think I have reviewed all of them bar one and made video about them here too) I wanted to share my thoughts on my very favourite last. I have loved a lot on the shortlist this year but without a doubt my favourite has to be Stay With Me by Ayòbámi Adébáyò which has pretty much every element of what I love in a book and held me captivated by it. 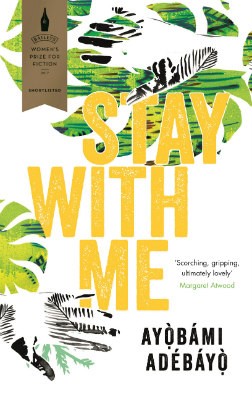 From the opening of Stay With Me we know that something has gone very wrong with the marriage between Yejide and her husband Akin as she writes of packing up and driving away. Where to, where from and what has happened we do not yet know but soon we are taken back a decade or two before to when the cracks began to show. The time when after much trying Yejide was finding it very difficult to get pregnant and it was becoming the constant focus of her husband and his family’s attention. (I know the below is quite a long excerpt, however I think it gives a real flavour of what comes in the novel as I am going to have to say very little as I don’t want to give too much away, which I will explain.)

I had expected them to talk about my childlessness. I was armed with millions of smiles. Apologetic smiles, pity-me smiles, I-look-unto-God smiles, name all the fake smiles needed to get through an afternoon with a group of people who claim to want the best for you while poking at your open sore with a stick, and I had them ready. I was ready to listen to them tell me I must do something about my situation. I expected to hear about a new pastor I could visit; a new mountain where I could go to pray or an old herbalist in a remote village or town whom I could consult. I was armed with smiles for my lips, an appropriate sheen of tears for my eyes and sniffles for my nose. I was prepared to lock up my hairdressing salon throughout the coming week and go in search of a miracle with my mother-in-law in tow. What I was not expecting was another smiling woman in the room, a yellow woman with a blood-red mouth who grinned like a new bride.

It soon transpires that Akin and his family have been plotting a back-up plan which is to introduce a second wife into the home, Funmi, a woman who they believe will bear children and thus save the family line as well as the marriage between Akin and his first wife. Breaking away from what is socially and culturally expected of her Yejide fights back initially in a rather comic way, yet this is the beginning of an unravelling between Yejide and Akin and a downward spiral of Yejide’s already low sense of worth since the death of her own mother in childbirth.

‘What did you feed them?’ Akin shouted.
‘Bridegroom, welcome back,’ I said. I had just finished eating my dinner. I picked up the plates and headed for the kitchen.
‘You know they all have diarrhoea now? I had to park by a bush for them to shit. A bush!’ He said, following me into the kitchen.

That is where I pretty much have to stop telling you the story, and we are only a chapter or two in, because what follows is a fantastically twisting and turning tale of what happens between Yejide and Akin in the aftermath of this with Adébáyò almost turning a marriage into a thriller which I wasn’t expecting but delighted me with the way in which she accomplished it. Of course, there is a danger in me simply saying that there are plenty of twists and turns ahead may mean you will look out for them but I doubt you will spot them. I genuinely couldn’t tell what was might happen next, and there were many a gasp out loud moment and many a heart dropping moments for this reader.

I am slightly worried that comparing Stay With Me to a thriller may diminish it in some people’s eyes, they couldn’t be more wrong and not only because to accomplish the best kinds of thrillers you need to hide a tightly constructed spiders web of plot where one can’t be seen. Adébáyò does this and much, much more. Behind the domestic dramas that are going on is the drama of Nigeria in the 1980’s and all the rioting and crime that was taking over the country and adds an additional tension to the novel as well as some heart breaking and shocking scenes as the novel moves forward.

I could not imagine then that one day in Nigeria thieves would be bold enough to write letters so that victims could prepare for their attacks, that one day they would sit in living rooms after raping women and children and ask people to prepare pounded yam and egusi stew while they watched movies on VCRs that they would soon disconnect and cart away.

One of the other elements that I admired so much about the book, and yet I have seen criticised in some places, is the fact that as the book goes on you realise it isn’t always Yejide that is narrating the story. Sometimes it flits to Akin and it takes you a small while to realise and then reassess the voice you are reading. I loved this because I thought it not only highlighted the two points of view of a marriage and all that befalls it, but more cleverly is that Adébáyò asks you to stop making assumptions about how a woman might feel about marriage and parenthood and how a man might feel about marriage and parenthood. It gives you so much to think about as well as asking you to check your own assumptions of men and women, though kindly.

You might think this implies that Adébáyò creates two leading characters who merge in to one far too easily, again that isn’t that case. Adébáyò’s characters all come fully formed whether it be leading players like Yejide, Akin, Funmi, Dotun or Moomi or lesser characters like Yejide’s competitor hairdresser Iya Bolu or the hermit up the mountain. They all brim with life, laugher and more often than not secrets. I adored them, even the shadier ones. I also loved the elements of fairy tale (you know me, I love a good fairy tale or myth) that intertwine and are told throughout too. Not often yet deftly and adding certain nuances when they do.

My favourite story was the one about Oluronbi and the Iroko tree. Initially, it was difficult for me to believe the versions my stepmothers told. Their Oluronbi was a market woman who promised to give her daughter to the Iroko tree if it could help her to sell more goods than other traders in the market. At the end of the story, she lost her child to the Ikoro. I hated this version because I did not believe that anyone would trade a child for anything else. The story as my stepmothers told it made no sense to me, so I decided to create my own version.

I could frankly go on for hours about how much I loved Stay With Me, can you tell? It brims with life, humour (dark and saucy), heartache and hope. It is one of those books that just enraptures you within its pages and you find yourself thinking about those characters, situations and layers long after as well as thinking ‘what a bloody good story that was’. For me this was a dream of a novel, it will be one of my books of the year without a shadow of a doubt, and I think Adébáyò is going to be an author to watch in wonder. Go read this book.