The Sport of Kings – C.E. Morgan

Those of you who have visited this blog for some time (it will be ten years old this year which seems madness) will know that I have a slight aversion to horses both in real life and in fiction. So when I spotted both Mary Gaitskill’s The Mare and C.E. Morgan’s The Sport of Kings I was somewhat vexed. Internally and then I cursed myself as I had popped both of these books proof copies in the recycling last year, because of the horses. However in the name of reading the whole of the Baileys Prize longlist for the second year running, I momentarily cursed the Bailey’s judges for their choices and then picked up the most daunting of the two, The Sport of Kings. Within an hour I was completely and utterly gripped, who could have seen that one coming from the cover or synopsis, yet this is not really a book about horses and horse racing, it is about so much more than that. 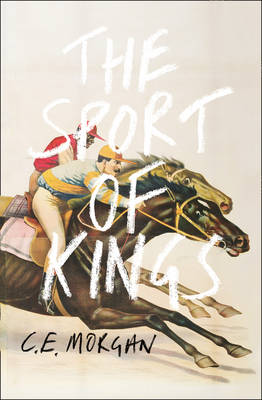 4th Estate Books, hardback, 2016, fiction, 545 pages, kindly sent by the publisher and then re-bought by me for me (that’ll learn me!)

As The Sport of Kings opens we join a young boy Henry Forge as he runs to escape his father< john Henry, from something awful that has happened in one of the barns and which he is being blamed for. Two lines in and Henry is asking himself ‘How far away from your father can you run?’, in many ways is actually the constant theme in the book as it moves forward. We soon discover that Henry is the master’s son of a vast plot of land and one of the wealthiest and longest running family dynasties in Kentucky. We also soon learn when he gets home and the belt is brought out, that his father is also a monstrous, bigoted, misogynistic tyrant as he proves time and time again throughout the first hundred pages.

His voice loud against the clattering, John Henry said, “What you don’t yet comprehend about women, Henry, is a great deal.” He stared at the cars as they flipped past. “I wouldn’t say that they’re naturally intellectually inferior, as the Negroes are. They’re not unintelligent. In fact, I’ve always found little girls to be as intelligent as boys, perhaps even more so. But women live a life of the body. It chains them to material things – children and home – and prevents them from striving toward loftier pursuits.”

I know, awful isn’t he? And this is just the John Henry that Henry (I know a lot of Henry’s and we have a Henrietta to come, but that is what the Forges are about) sees. One of the brilliant things which C.E. Morgan does is let us see John Henry from other characters eyes, both his wife and his staff, and we see many of the things we shouldn’t – but I don’t want to spoil anything (I did an admittedly thrilled ‘oh my goodness, well I never’ about 50 pages in). Honestly, this book has lots of lovely sensational moments throughout, which also made it so readable and epic.

Anyway, I digress… The more Henry’s father rages and orders the more Henry wants to go against him, infuriating his father by announcing when he inherits the land it will be used to breed the finest race horses, the ultimate revenge in his eyes and also the ultimate escape as he goes on to learn everything he can about them filling his mind with anything but his father. But as they say the apple never falls to far from the tree and, as we all probably know too well, in spite of ourselves elements of our parents run into us despite our best intentions and we soon see Henry has far more of his father in him than he would care to admit or acknowledge.

Ginnie said, “Henry, are you going to get married?”
Henry made a face. “Someday, maybe, I don’t know.”
“Let’s you and me get married!”
“You? No way, you’re ugly.”
“I am not!”
Henry sighed. “When I get married, I’m going to marry a beautiful woman. My father says not to waste energy on ugly girls.”
Great dollop tears formed in Ginnie’s eyes. “A pretty girl won’t be half as fun as me!” She whined, but Henry was distracted by the blooms of his breath in the suddenly icy barn air.

Ginnie is right, I won’t say why but she is and this leads us onto the middle section of the book which not only sees Henry’s daughter Henrietta start to take a real prominence in the families thoroughbred business, her tale also brings with it a darkness to the whole breeding theme throughout the book as well as hiring a young man, Allmon Shaughnessy, whose life in the darkest, poorest parts of Cincinnati couldn’t be more different than the colour of his and Henrietta’s skin and here is where the heart of the story, for it is a ripping yarn, starts to reveal itself.

In the first scene of Allmon’s tenth year, a girl dies in the cement garden. Her name was Gladys Gibbons, just a tiny little thing on the third floor opposite with skin the colour of chalky churned-up river water, a soft cheek and a pert ski-slope nose like a white girl’s, maybe the kind with money. That nose made her a beloved pariah, as despised as she was envied by girls who didn’t yet know what envy was. She had the stamp of difference on her face, and that stamp was a pass. The girls in her building put their hands to the skinny vale between her shoulder blades and shoved. Knocked her against barriers, into doors, down onto cracked sidewalks and onto her knees. She thought: I’m ugly. And there was no grown person to tell her otherwise. So the wind of natural confidence died.

How beautifully and vividly written whilst utterly heartbreaking is that? You see The Sport of Kings is not really a book about horses and racing, it is a book about race, class, bigotry, power and privilege and how those who have it and those who don’t fare over several decades in American History and it saddens me that people, myself included, might avoid it because they think it is about horseracing when it is so, so, so much more. And it is an incredibly powerful example of an epic book that contains all of those themes whilst also being an incredibly addictive family saga to with affairs, murder, incest, poverty and riches, secrets and ok, horses. As one character sums it up so brilliantly “Those Forges are motherfucking nuts.” They are.

In many ways what I think made me enjoy it so much was it had all the elements of a Victorian sensation novel, which I adore, with all the twists and turns, melodramas and characters of incredible depth. You have the main characters Henry, Henrietta and Allmon who come with whole family descendent stories behind them and who effect the Forges dynasty in huge ways, but you also get every characters back story too (a trope I really love in a big sprawling book) even the smallest of characters. And you never know when one of those smaller characters might come back to a big dramatic effect when you least expect it… oh, I might say too much.

This could of course make it sound like The Sport of Kings is a never ending, far too filled and possibly flabby book. Not at all. If anything I would have quite liked for it to have been another hundred or more pages as I felt the final section was somewhat suddenly rushed and a bit manic, one of my only two qualms in the book. The other being that I can’t decide if I feel like Morgan does something incredibly brave, making a huge point with one of her characters story arcs or if in fact she really, really lets them down (a bit like J. K. Rowling did with A Casual Vacancy, though in this case it didn’t ruin the book for me) which had me slightly riled for a while after putting it down and I am still debating.

The Sport of Kings thrilled me and surprised me. It also reminded me why sometimes picking up a dense family saga can be such a wonderful reading experience. You find characters you live and breathe with, even the ones you love to hate; you have big chunks of history to digest with all their politics and social questions around to think about and the ripples that affect everyone afterwards. I was lost in a ripping good epic yarn, for that is really what this book is and I would highly recommend you get lost in it too. You’ll race through it – sorry, I couldn’t not.

Has anyone else read The Sport of Kings and if so what did you make of it? If you had been put off somewhat by how it was sold have you changed your mind? If you’re thinking about giving it a whirl now you can get it here. I know I certainly want to give C.E. Morgan’s All The Living a read now.