Rounding Up The Reviews #5; A Trio of Graphic Novels

A series of posts I introduced last year was the ‘Rounding Up The Reviews’ posts because sometimes (particularly this year with judging) you read more books than you have time to write about, or you read some books which you don’t feel you can write 800+ words about. This isn’t to do any of them a disservice, why do I instantly need to feel defensive, because you still want to mention them so a round up post seems the perfect idea. I will have a few of these over the next few weeks and months.

First up are a trio of graphic novels (The Pillbox by David Hughes, The Art of Flying by Antonio Altarriba & Kim, Never Goodnight by Coco Moodysson) which I have read over the past few months. Graphic novels are not something I have really been ‘down’ with, yet in the last few years I have read some corkers and so am trying to read much more of them. What I am learning, as you will see below, is that all as with all art forms certain things are my taste and certain things aren’t even though I enjoy them all.

The Pillbox by David Hughes is a ghost story set on a summer holiday on the British coast. Jack is pretty much left to his own devices with his dog over the summer and on one of his adventures along the shoreline he discovers a pillbox (look out base) used in the Second World War and meets Keith a strange boy who Jack wants to befriend. What follows is a tale both of self discovery in the present and also of abuse and injustice from the past.

Now I have to say this book still has me pondering what I think of it. In part that is because of the story and in part it is because of the artwork. In terms of story it all feels slightly dreamlike and nightmarish in the fact that it is bonkers (a woolly mammoth turns up occasionally) yet also slightly confusing. If I am being 100% honest it felt a bit like a work in progress which wasn’t quite fully formed. Interestingly I found this reflected in Hughes artwork as some of the pages are half drawn where others are (like above) intricately and beautifully drawn.

I personally didn’t love the artwork yet I was mesmerised in a slightly haunted way by it, it captured my attention whilst also making me want to look away – a lot like some of the upsetting parts of the book as you read on. I loved how he uses colours around the emotions and feelings going on in the book when no one is speaking though. So I am conflicted between thinking this book wasn’t for me at all, yet also founding it deeply affecting and disturbing and won’t forget it in a hurry. Creepy and odd.

The Art of Flying was originally released in its homeland of Spain in 2009 yet has taken quite some time to translate (by Adrian West) and to come out here in the UK. It is a tricky book to describe as it is not a memoir but more a memoir of Altarriba’s father who committed suicide at the age of 90. Altarriba tries to imagine his father’s life from what he knows of it and in doing so creates the story of a man who grew up in Aragon, a poor town in Spain, who fought in the army during the Civil War and the defected, and on it goes leading up to his death. It is a fascinating story of a man’s life and gives a real insight into some of Spain’s history which I knew very little about.

There is a but coming though. As wonderful as I thought it was I often felt this really wanted to actually be a novel. There is so much speech and so much scene setting in words that occasionally I felt both like I was being lectured on the history and also not being allowed to let the pictures do their work and Kim’s imagery is stunning. I loved how Kim makes the artwork match the popular comic strips of that time that were fashionable, I also think he does a lot with a palette of black, white and grey’s. 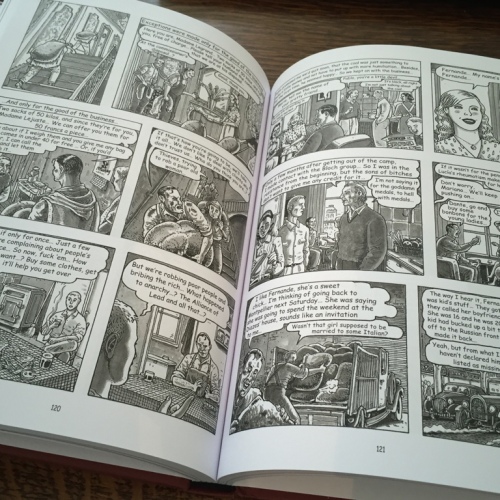 The overload of text though creates, possibly intentionally, a claustrophobic feeling in the book, along with slight eye strain as the text is sometimes tiny. Subsequently it really slowed me down, which was distracting as there is a sense of adventure and detection in the book I just couldn’t quite get in the rhythm of it. I ended up reading a part; there are four, a day which I found really worked. An interesting read, not quite my cup of tea as I think I would have preferred it either just in text or just in pictures. Lots of people would love this though.

Last but certainly not least is Never Goodnight by Coco Moodysson, which was adapted into the film We Are The Best! which is apparently something of a cult movie. Never Goodnight is the story of three friends over the space of a month (December 1982) in Sweden after they decide to become punks and set up a band. Now I have to say this premise did not thrill me but the imagery appealed and so I gave it a whirl…

I really enjoyed this. I thought Moodysson created a really intricate and insightful world not only of three young girls (and their friendships, rivalries, first loves and dreams) but also a look into the culture of the time and both the punk movement and where feminism was, or wasn’t as they keep getting called a girl band to their horror, at that time.  There is teenage angst, there is troubled homelife’s, there is a sense of history to it in a weird way, there are also some odd moments that didn’t seem to be relevant to the plot but promoted different life style choices, kind of… 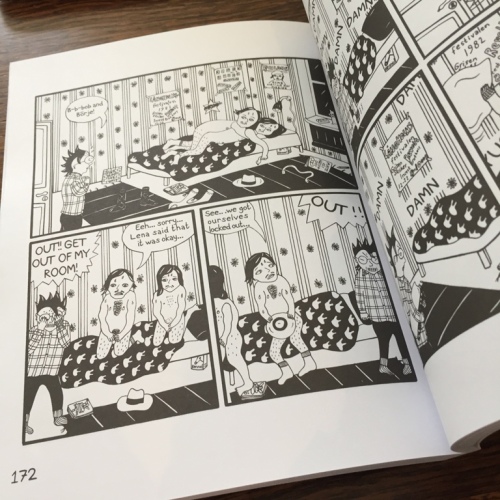 The artwork really suits the tones of the book as it is simply black and white yet also jovial and cartoonish. I was just charmed by it, all the more so because I didn’t expect to be.

So that is your lot for now, I will be rounding up some novels in the next few weeks. I hope you liked this quick round up post, as always let me know if you have read any of the books and what your thoughts on them were. I would also love more graphic novel recommendations. You can see the ones I have read so far here (book covers will be reuploaded soon, not sure what has happened there).