If you have come by this post thinking that I am discussing A.S. Byatt’s ‘The Children’s Book’ then you may very swiftly want to pop here instead as I am going to be talking about actual childrens books. It was initially a poll that Simon of Stuck-in-a-Book posted on Enid Blyton vs. J K Rowling that started my train of thought. He then wanted to find out what peoples favourite childrens books were, which ones people might not have heard of etc.

All the published children’s books I initially read and loved were by Enid Blyton at first its a little predictable but I got my Mum’s old books to read and her entusiasm for them passed onto me. I then branched  out (ha, branching out at the age of about six seems extravagant) onto Jill Murphy and her wonderful Worst Witch series before starting on the wonders of Robin Jarvis (The Whitby Witches is still one of my favourites. My very favourite books as a child though weren’t  ones which were published or available in shops. Here is just a selection of some of them… 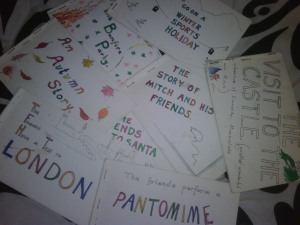 So what is this series of books? Well its a special tale about a witch called Esmerelda, her giant cat Marmalade and their mouse Mitch. 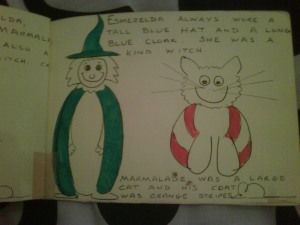 The cast of characters eventually grew as the some more friends in the form of a duck called Rapunzel and ‘the hens’ as well as a certain young boy called Simon who lived in Newcastle sometimes and Matlock sometimes… hmmm could that be anyone we know? 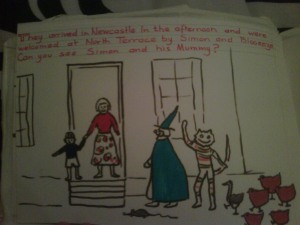 So who wrote these books and why did they feature me, my Mum, places I had been too and my pet duck Rapunzel and my hens (who were never evil in the books like they were in real life). Well every last page of each adventure finished with some farewells and this image might give you a clue… 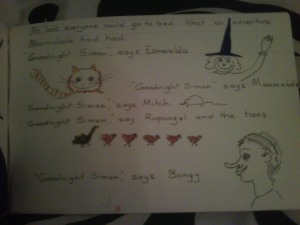 So who is Bong or Bongy? Well he was my Granddad (I couldnt say Grandpa when I was a baby so Bonpa became Bongy), in fact he was married to Granny Savidge Reads, until sadly he died two years ago aged 68 suddenly from cancer. Though he isnt here I am lucky enough to have these books (though we do all have an unfinished book of his memoirs my Gran had printed) which I treasure. The fact he made these for me by hand while he had a full time job I think is just amazing and still touches me. He sent these when I was living in Newcastle while my mum did her degree (in fact its where I met Novel Insights) from when I was 4 up until I was about 6. One would arrive through the post every few weeks I loved them and it certainly pushed me further into read as I had these books that were so special, all my own with no other copies and I even featured in some. I think that the time and effort he took to make over 20 books is amazing and they are my most treasured childrens books… in fact my most treasured books full stop!

What about you? What books have you treasured from childhood? I am thinking I should get copies of these made for all his other grandchildren, maybe a publisher would like to publish them with the pofits going to a cancer charity… am off on a flight of fancy.