Sometimes you just get a gut feeling about a book don’t you? You see it in a bookshop, or hear about it somewhere and just think ‘that is probably going to be the book for me’. That was the case with Eleanor Wasserberg’s debut novel Foxlowe, a book which caught my eye with its cover (a creepy looking big house gets me every time) and then became a must read when I discovered it was about communes. So I promptly asked the publishers if I might snaffle a copy. Yet once it arrived I did that awful thing when you have I crush, I became a bit shy of it (coy some might say; sideways longing glances and smiles) and dared not pick it up in case it wasn’t all I had hoped. Thanks to a booktube buddy read with Jean, Jen, Mercedes and Brittany I finally picked it up. 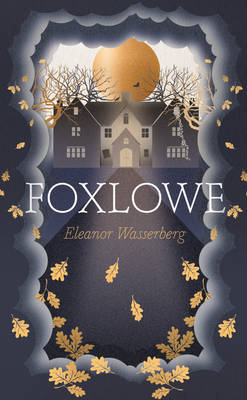 Tiny red beads came from the lines on my arm. Those soft scars give away like wet paper. There’s a game that helps: footsteps in the dust, twisting to match the old strides without taking any of the skin away from the Spike Walk. Another: name steps all the way to the yellow room end of the Spike Walk. Freya, Toby, Green, Egg, Pet, the Bad. I made it to the final nail and squinted at the arm. Red tears and the lines woollen hot; a crying face. I turned to Freya, her long arms wrapped around herself at the ballroom end of the Walk. She nodded, so I breathed deeper and licked some of the salt and coins taste to make it clean.
Freya spoke. – And back again, Green.

As Foxlowe starts we are thrown headfirst into the world of Green and the realm of the rambling old house of Foxlowe. Green , a young girl whose age we never really know because she doesn’t, we soon learn has done something she shouldn’t and so is undergoing ‘the Spike Walk’ a form of punishment by the commune of Foxlowe’s (self proclaimed, we discover) leading lady, Freya. Seemingly something called ‘the Bad’ from the outside world has worked its way into Green, children being more susceptible, and needs to be exorcised.

From here, through Green’s youthful and rather naive eyes, we are soon show how life within crumbling Foxlowe works; Richard and Freya being two of the Founders who have created various myths, half truths and full on falsehoods to keep both the younger (Green and October, or Toby) and older members (Ellensia, Dylan, Liberty, Pet and Egg) of ‘the Family’ away from the outside world. Green has never questioned the, often unwritten but very much felt, rules and regulations in free spirited Foxlowe, that is until Freya comes home with a new baby, Blue, who Green instantly hates with a jealous vengeance and starts to rebel against. Or has ‘the Bad’ taken her over?

It didn’t take long for Freya to see how I hated new little sister almost from the beginning. It was in the faces I gave her and the way I held her a little too rough. Then she overheard my name for her. I thought it would be the Spike Walk but instead I was Edged. Freya told the Family this one morning by tossing me the burnt part of the bread and they all saw. They all had to look away when I spoke and no one was allowed to touch me. I was alone, edging around the circles the Family made around New Thing. I snatched eye contact and accidental touch, watching and listening, haunting rooms.

After the arrival of Blue into Green’s world Wasserberg starts to turn things up a notch, the initial slightly creepy tension building and becoming more and more uneasy. At the same time the relationship between Freya and Green, who you are never sure if are real mother and daughter or not, starts to deteriorate and Green rebels. Throw in all the questions and hormones of a girl on the cusp of womanhood and you have quite the potent concoction that not even the most skilful of witches could brew up. It is here that Wasserberg then surprises us, as we lead to what we think is the dénouement, she takes us somewhere totally different years after and then asks us to work backwards. Suffice to say I loved this and not many authors can pull that trick off.

I was hooked from the first page (though the prologue did throw me a bit, just crack on after that and you’re fine) until the end, which I have to say absolutely chilled me with its final paragraph. No, I am not spoiling it by saying that, it is just fact and was also something that made me love the book all the more. That said it takes more than a full on body icy dread chilling ending to make a book a success, you have to get there first and Wasserberg had me captivated throughout.

One of the main reasons for this are the twists and turns and mysteries within Foxlowe and its characters, plus the dynamic of the internal world and the external. The other is Green’s narration, which might take you a little while to get into the rhythm of, as she writes with a mixture of hindsight, a child’s eyes and slightly skewed viewpoint. Her naivety and misinformed (or groomed, if we are being honest) mean she spots things that seem normal or minimal to her, yet we read very differently. I bloody loved this, and then there was Freya…

Freya loved rolling dough. She thwacked it onto the bench, pummelling with her fists. I gave up mine, stuck on the bench in stringy clumps, and watched her. A thick line of white ran through her black hair, which she wore twisted up in a high bun. Her long skirt was pulled down over her hips, and above it she had tied her t-shirt in a knot. Silvery lines zigzagged over her skin, around her back.
She caught me with her eyes. In the gloom of the kitchen there wasn’t a fleck of colour in them, so dark they made the whites seem to glow.

I am an absolute glutton for a villain in literature; regular readers will know how much I adore Rebecca’s Mrs Danvers, you shouldn’t but you do. Freya was like that only worse, I didn’t adore her but I was grimly mesmerised by her. She is a fascinating character study of what makes a cult leader. As much as she is beguiling at her core she is a scheming, vicious (some of the things she does to the children is appalling and some readers may find deeply upsetting, be warned), manipulative, power hungry monster who uses her body and people’s need for love and acceptance to get what she wants. And she gets worse and Wasserberg’s depiction of how people can be brain washed, at any age, is pretty haunting. I loved to hate her.

As well as some of the bigger elements Wasserberg captivates you with more hidden, subtle and intricate elements. This is all because of her writing; one of the things I liked in particular was how easily I was lead into such a dark book and all its themes, no showing off. For example she doesn’t make a big song and dance of how Foxlowe crumbles at the rate Freya’s relationship with Green does, or how that also links into the crumbling of Freya’s own power and mental stability. It is all just there in the background. Oh and another big favourite things of mine, fairytale and myth are all interwoven within Foxlowe which becomes as big a character as any of the people within it.

At the end of his first week the weather turned cool, and we made a hot dinner. I dipped bread in egg, pushing it under to make it soggy. Freya took the eggshells and smashed them in her fists.
– So witches can’t use them, she said, and winked at me.

I won’t forget Foxlowe for quite some time, and not just because of that ending, which gives me the shivers every time I think of it also because it is one of those books where it’s atmosphere lingers with you. It is an engaging, uncomfortable, gripping and pretty darn chilling story of the power of manipulation and desperation to be loved. It is also a deft exploration of the psychology of brainwashing both for those doing it and those who fall prey to it. I cannot recommend this book highly enough; whatever Wasserberg does next I will be rushing to read it.