Many of you may know, as being so excited I mentioned it a few times, I had the joy of judging Fiction Uncovered earlier this year. Over the next few weeks (and indeed last three weeks) I will be (and have been) sharing my thoughts with you on the winners, one per week. This week it is Grace McCleen’s strange, alluring and unsettling novel The Offering an insightful and disturbing novel of madness. 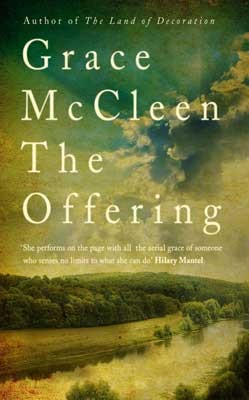 There has been a great deal of talk here recently about an event concerning myself and Dr Lucas, which took place from what I can gather in the Platnauer Room some two weeks ago. I presently find myself in the quiet room while Dr Hudson, who has taken over my care in Dr Lucas’s absence, devises an appropriate plan. I said to Dr Hudson: ‘I do hope that whatever happened will not prevent my release from Letham Park, something Dr Lucas talked about on many occasions.’
That was when Dr Hudson stared at me.

I am a huge fan of books which hook you in with a mystery from the start. Grace McCleen’s third novel The Offering does just that as within a few paragraphs we know that something has happened between Madeline and her previous Dr Lucas, we know it is bad, we just have no idea what it is or how bad it might be. We’re instantly interested and intrigued. This ratchets up a notch when we discover that Madeline is not in a hospital but an asylum where she is now in isolation, it ratchets up again when we discover she has been there for twenty years since she was discovered walking along a road with amnesia. We now of course not only feel the need to know about the incident with Dr Lucas, we are also desperate to discover what happened in her childhood despite the very early sense that this is not going to be a comfortable discovery.

I don’t want to say much more about the premise because this is one of those books that needs to be read and discovered rather than have anything given away. I can say that as the book goes on McCleen makes it as gothic, twisty and strange as you would hope from a novel of this kind. It has something of the ‘sensation novel’ about it yet cleverly you cannot work out for the life of you when it is set, there are cars but that is as much as we know adding a slight dreamlike or nightmarish feel as and when Madeline goes through highs and lows. It also interestingly made me occasionally feel slightly disorientated, never lost or confused, as if I had been sedated as Madeline often is – having been sedated (I wasn’t in an asylum) it brought that strange sense of being slightly distant and at odds with everything, yet feel fairly compos mentis, right back.

As Madeline is forced to look back at her past, no spoilers I promise, she is forced to look at her memories and work out what she remembers right, what she misremembers and what she remembers yet may have misinterpreted. This is something that it is fairly hard for us to do at the best of times, come on can you remember what you were doing on this date exactly twenty years ago, it gets all the more complicated when part of your brain is trying to repress or hide things as a way of self preservation or denial. The Offering  also takes a very blunt and direct look at how we deal with people with mental illness and particularly the questions around treatment and medicines and if they help or hinder leaving the reader to decide for themselves.

If I am making this book sound really dark, intense, creepy and a bit gloomy that is because it is and unapologetically so, yet McCleen doesn’t make this relentless. There are moments of great joy in Madeline’s past as her parents and her find a new home that have that almost golden sheen that you have of particular moments. (I say that though actually I have no memories before the age of ten due to something that happened in my childhood, but moments after that that instantly make me happy have that glow.) She also finds, if slightly darkly or bitter sweetly, moments of humour while Madeline is in the asylum which will make you laugh and then make you feel sorry for those involved.

Today began as a particularly dreary one here at Letham Park, the sun hidden behind banks of cloud, neither cold nor hot, dark nor light. Eugene wet himself; Pam ate clay and had to have her stomach pumped; Margaret taught me a new stitch; Robyn’s parents arrived to take her out for the day; Alice made Mary cry; nothing out of the ordinary at all.

I have often said on the blog that comedy when written well can be a powerful device to highlight the dark and almost create a heightened emotive response which is how McCleen uses it with much effect. Her writing though is marvellous throughout; the plot is tightly twisted and slowly revealed, the book feels uneasy and disorientating yet never confusing, the atmospheres are rife and while the setting and time are an enigma the sense of place and the landscapes appear vividly in your mind. The Offering is quite unlike anything I have read in some time, I recommend you give it a whirl.

Have any of you read The Offering and if so what did you make of it? Have you read either of Grace’s previous novels, and if so what were your thoughts? I have her debut The Land of Decoration on the TBR as I will definitely be reading more of Grace’s novels.