Before I read it, I had some really odd preconceived ideas about H. G. Well’s The Invisible Man. First up I thought that it was a tome of some several hundred pages, wrong, it is a novella. Secondly I thought that it was set in the 1970’s (impossible as it was written in 1897) and involved some old man in a mackintosh who smoked, wrong, that is just something I naively surmised from an old 70’s edition of the book my mother had on her shelves. Thirdly I didn’t think I would enjoy it in any way shape or form, so wrong. I absolutely loved this book. 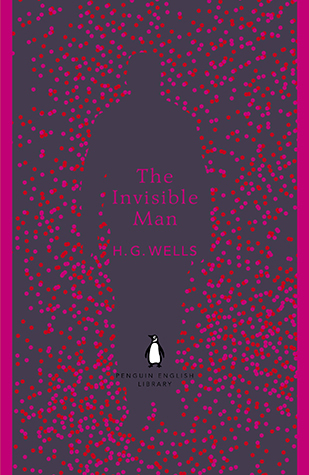 Most of you will have read The Invisible Man already, but for the few of you like me who have put off held back from reading it until now possibly because you assumed it was about some weirdo in a flasher mac, or about some boring scientist in a laboratory made of glass (where do I make these assumptions up from?) here is what the book is actually about…

One night, during a snow storm, a stranger going by the name of Griffin, arrives at an Inn in the small village of Iping looking for somewhere to shelter a while from the world let alone the weather. Strangers come and go in any inn and yet this stranger is stranger than any previous stranger (I have written the word stranger too many times and its gone weird in my head, like when you say a word too much) as he is covered in a long cloak, darkened glasses and his hands and the whole of his face are covered in bandages. The local folk, in particular the landlady, become very interested in Griffin, but interest is the last thing he wants and so locks himself away from prying eyes. Yet as the strangers’ arrival coincides with some odd goings on in the village, and a bout of sneezes from nowhere, the people become more and more obsessed with Griffin until events get out of control.

‘Leave the hat,’ said her visitor in a muffled voice, and turning she saw he had raised his head and was sitting looking at her.
For a moment she stood gaping at him, too surprised to speak.
He held a white cloth – it was a serviette he had brought with him – over the lower part of his face, so that his mouth and jaws were completely hidden, and that was the reason of his muffled voice. But it was not that which startled Mrs Hall. It was the fact that all his forehead above his blue glasses was covered by a white bandage, and that another covered his ears, leaving not a scrap of his face exposed excepting only his pink, peaked nose.

What I hadn’t expected The Invisible Man to be was such a wonderfully gothic mini Victorian horror of a story and I absolutely revelled in it. With a snowstorm, a village out in the middle of nowhere and a mysterious stranger just for starters I knew that this was going to be one of those books that I just devoured and indeed I sat and read this in one greedy sitting actually feeling emotionally wrung out and bereft by the time I had finished.

You see what I was expecting (apart from an odd scientist who might flash you any moment after he had spent the day in a glass laboratory and then driven home in his Ford Capri, seriously that was what I thought) was a book about a scientist who had gone invisible and then become a helpless victim of circumstance. Now, without much away as you soon learn this, Griffin has been a victim of sorts yet he was doing something calculated that went wrong. Oh and he is pretty much going utterly bonkers loop-the-loop crazy.

What is wonderful with the way Wells handles Griffin’s character is that you go from moments of genuine horror to moments of genuine laughter (Wells must have had a wickedly dark sense of humour) and then back to horror again. Marvellous! A prime example of this is with the ‘sneezing from nowhere’ what starts off as something which reads as wonderfully comic, which made me laugh out loud, to something that marks a forthcoming dome and builds this real sense of foreboding. On several occasions I had the full on hairs on the back of your neck standing up with fear. This also creates a really interesting relationship between the reader and Griffin, is he the misunderstood hero of the piece or is he a despicable genius?

Is it the element of ‘hero or monster’ that I also found fascinating in the way that the story is told. We initially think the arrival of Griffin is where all the drama and action of The Invisible Man happens, yet as we read on we find out about the occurrences that lead him there and the plot thickens and Wells plays with us and what we think morally. I shall say no more. Oh, well, apart from the fact that the ending had me genuinely upset, I may have even wept. Clever old Wells, now I really will say no more in case I accidentally spoil things.

If you hadn’t guessed by now I absolutely loved The Invisible Man. It completely surpassed my, admittedly low, expectations and all the assumptions that I had made about it. It has everything I love in it; mystery, murder and mayhem. It is a little gothic masterpiece. If you haven’t read it yet then please, please, please get your mitts on a copy. I now want to read absolutely everything else that Mr Wells has written.

As you are all observant folk, you might be wondering why I ended up reading a book I really wasn’t keen to? It was Rob’s choice for a past episode of Hear Read This, you can hear our thoughts plus Kate and Gavin’s here. Now what about you lot? Have many of you already read The Invisible Man and what did you make of it? Which, now that I have been and binge bought them all, of Wells’ classic should I read next?