I got tagged by the lovely Simon T of Stuck in a Book last week in a meme he had created. It’s a great idea and one that, should you wish to, you can all have a go at. You simply go to your shelves close your eyes and pull ten random books of them and then tell your readers what those ten books tell the world about you. Simon says (ha, I normally am on the receiving end of that saying) that you can cheat a bit which is what I had to do a bit as I only took books of my shelves with books I had read on and some of the titles didn’t work. Anyway on with the books which as you can see I carefully arranged on the sofa… sort of. 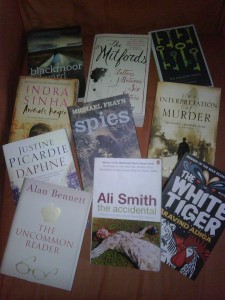 Blackmoor by Edward Hogan
This is the best casing point of proving that I wasn’t cheating and as soon as I had picked it I thought ‘oh no’ as I couldn’t think of anything it said about me. I then remembered that it is set in Derbyshire and that is where I am from so that tells you more about me doesn’t it.

The Mitford’s: Letters Between Six Sisters edited by Charlotte Mosley
Now you probably already know I am a bit of a Mitford maniac so that’s not really something new. But I am a huge fan of letter writing. I used to write sides and sides of A4 letters to my friends but sadly it’s gone out of fashion, I am thinking I should make some new pen-pals but not sure how you go about it.

The Haunted Hotel by Wilkie Collins
Now after my sensation season I don’t need to fill you all in on how much I love the genre or how fascinated I am by all things Victorian but its worth a mention. Did you also know that I am into all thinks ghostly and though I haven’t stayed in a haunted hotel I worked in on in Devizes and have stayed in a few haunted sites like Peterborough Museum which was once a hospital and a mansion (I even spent a while in the old morgue) I have also slept in the London Tombs a lovely bunch of plague pits for charity.

Animals People by Indra Sinha
India is one of the countries that I most want to go to, fact one. The second fact is that I have always been a big fan of pets. In fact from about 3 years old I had a duck called Rapunzel who lived indoors with us and would fly to me if I shouted her, she was one of the best pets ever. Since then though I have reverted to cats and goldfish, I only have the latter at the moment but we could be getting two little sets of whiskers in the house soon. Very excited! Ooh and thirdly I did my work experience at a vet surgery and was in the Swindon press after we helped save a dog’s life.

Spies by Michael Frayn
My fantasy job, as I soon decided I didn’t want to be a vet, is now to be a spy. It won’t happen in a million years but I would love it, apart from being terrified all the time. It is also why I am addicted to Spooks when it’s on.

The Interpretation of Murder by Jed Rubenfeld
If I had done a degree my aim was to become a psychologist and to go onto do criminal profiling and working out why people kill and how their killings say so much about a killer. I think its fascinating and why I like crime fiction so much and need the occasionally binge.

The Uncommon Reader by Alan Bennett
Well I am an avid reader and hopefully the books I read aren’t common. Hmmm, how do I put that better? I hope I read a diverse collection of books. Also apart from age and national treasure status I like to think I have a lot in common with Alan Bennett he’s northern, a writer etc, etc.

The Accidental by Ali Smith
I am one of the clumsiest people you could ever meet, seriously it’s ridiculous. Falling seems to be one of my specialities or bumping into things or tripping, basically anything is a health hazard.

The White Tiger by Aravind Adiga
This was my only cheat and it’s a bit of a tenuous fact. I am a big fan of cats; in fact as a kid I wasn’t interested in dinosaurs but I wanted a sabre tooth tiger as a pet. So I think if I could be any animal it would be snow leopard or white tiger. I know that’s pushing it a bit but it’s the best I could do.

So there you have it! Who else is up for doing this? I wont tag particular people just leave it up to all of you to have a go at and if you do it do pop a link in the comments, or of course if you have already done it. Do you think these books say a lot about me; do you feel you know me a little bit better?

There has been a piece in several different papers this week about the surge in second hand book shop sales. Is this because of the credit crisis? I think that assumption is a little too strong. I personally think people are buying from both; I have to say with book groups I will always try and find a book second hand just in case I don’t like it. Now I am get some sent which helps, I can understand people not splashing out on a book especially hardbacks if they might simply not like it. Mind you I have rules with second hand books, they need to not have cracked spines or water stains I am quite picky unless it’s an orange Penguin or is ‘loved worn’. I can also see in some cases the fact you can get a lot of bargains. Like today when I went for a little wonder (research for this blog you understand) I managed to get all of this for just under a fiver.

Red Dragon/The Silence of the Lambs – Thomas Harris
I am almost 100% sure that I have read Red Dragon, but don’t want to check if the ending involves a boat and a sudden twist just in case I am really off and it was one of the others. I saw these and thought ‘oh why not’? I remember enjoying, if that’s the right word, whichever Hannibal Lector book it was about eight years ago.

Animals People – Indra Sinha
I have read this so it’s going straight on the shelves. It was one of the many books I have lent to someone and never seen the light of day again. One of the most unlikely likeable protagonists I think I have read in the last few years and what a story he tells. A fictional chemical factory explodes in a town in India (based on true facts) and the scars it leaves on the land and its people. Brilliance!

Quantum of Solace – Ian Fleming
A collection of all the short stories of James Bond which is in pristine condition and would have set me back over ten pounds. I want to read more Bond after really enjoying the darkness I didn’t expect in Casino Royale last year.

The Ghost – Robert Harris
Have no idea what to expect from this at all. I wouldn’t have picked this up full price but have heard a lot of good things about the author and thought this was a worthy try. We will see…

The Night Watch – Sarah Waters
Read it last year and really enjoyed it have bought this for Novel Insights.

A High Wind In Jamaica – Richard Hughes
I would not have picked this classic up had I not seen it today and for so cheap. Sounds like a very interesting mix of Pirate story, children’s adventure and literary classic.

The Shakespeare Secret – J.L. Carrell
I fancy reading some ‘adventure’ stories this year and remember there being some really positive reviews of this, I just didn’t quite want to buy it when it came out and am not sure why now. It’s now on my TBR so no complaints.

Child 44 – Tom Rob Smith
I was sent this by the publishers last year, decided would pick this up as another treat for Novel Insights.