Well I think I might have just discovered the perfect Christmas read if ever there was one. Mystery in White was first published back in the 1930’s in that golden age of crime, yet for some reason went out of print until The British Library republished it as part of their Crime Classics series, along with many other forgotten novels, this year. Believe it or not in the lead up to Chrimbles it became one of the biggest selling paperbacks, having read it I can see why and I wish I had read it sooner (or could travel back in time in a time bus) to make sure you all had it in all your stockings and those of the people you love most. 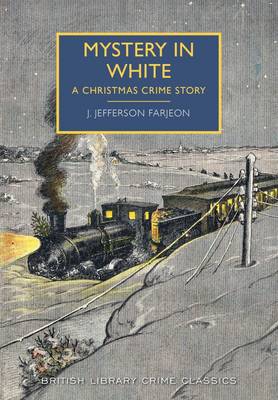 British Library Crime Classics, 1937 (2014 edition), paperback, fiction, 256 pages, bought by myself by myself

On Christmas Eve, along the track between London and Manchester, a train becomes stranded in the snow. Those onboard must decide if they can stick it out in their carriages or if it might be best to seek shelter somewhere else. In one carriage a group of strangers, bar brother and sister David and Lydia, all decide that they will try and head to the nearest station of Hemmersby some miles away. Yet as the snow starts to fall harder they realise they are lost, until they (literally) stumble upon a country house. A country house where the door is unlocked, the larder is full, the kettle is over boiling and there is absolutely no one at home. Shelter overrules suspicion or concern, that is until the fires are lit and the passengers are warm and then the feeling that there is something very wrong with the situation starts to arise.

“Funny!” said the owner of the head. “Tea all dressed up and nowhere to go! I say, David, what do you make of it?”
David turned from the couch.
“There’s still upstairs,” he replied. “I’ll tackle that, if you’ll stand by here.”
“Wait a moment!” exclaimed Lydia.
“Why?”
“I don’t know. Yes, I do. What I meant was be careful.”
“That doesn’t explain anything.”
“Nothing explains anything! If it were a fine day it might be quite natural to run out of a house for a few moments while a kettle’s boiling, but in this weather – can you explain that? Where have they gone? Not to post a letter or cut a lettuce! Why don’t they come back? I didn’t tell you, the kettle wasn’t boiling in a nice quiet respectable manner, it was boiling over. Oh, and there was a bread-knife on the floor.”

When I was ranting about discussing The Floating Admiral (read it you might have a giggle) with you all the other day I mentioned my love of the golden age of crime novels. Mystery in White reminded me just why that is the case, before promptly making me quite cross that duds like the aforementioned Detection Club’s offering have been  in print almost continually where as gems like this haven’t. Sorry, I need to let it go, but it is quite cross making.

Mystery in White has everything you need in a brilliant crime novel. It has a situation we can all imagine ourselves in, stranded in snow (as I very nearly was yesterday on the motorway of all places), it has a group of strangers who know nothing about each other and might have all kinds of secrets, it has a creepy old mansion house as its setting, it has one or potentially two crazy murderers about and it is thrilling with a slight sense of horror and the supernatural about it hiding in the corners of every room or behind every tree. Most importantly of course there are no mobile phones and so there will be no help, well not until the snow thaws and melts and who knows if these unlucky souls will last the night.

The cast of characters too is almost perfect for its era. David is clearly the hero, though he hasn’t quite got the range in terms of brains. Lydia is his plucky sister who will not be treated as just a mere girl. Jessie is the typical damsel in distress, spraining her ankle and fainting around chapter three – though note, she may be a chorus girl but she might have the second sight. Mr Hopkins is initially referred to only as ‘the bore’ yet once in the warmth a slyer seedier side is revealed. Mr Thomson, with no P, is the flaky man who blunders rather. Mr Smith, the dodgy bloke from East London with the cockney accent. And then there is Mr Edward Maltby, of the Royal Psychical Society, who very early on asserts himself as the lead and detective yet does he know too much?

All this would be a complete cliché with a cast of utter caricatures if it wasn’t for the fact that it was so brilliantly written and superbly plotted. If all of his books are like this I have no idea why J. Jefferson Farjeon is not much better known with all of his books in print. As you go on reading the Mystery in White not only will you be completely bamboozled as the plot takes on some brilliant twists and turns (which I will not spoil, I couldn’t see any of it coming) and as the element of horror and suspicion starts to build the atmosphere is tense and palpable, it is honestly marvellous.

I think a Mystery in White could be one of my crime novels of the year. I was genuinely hooked by the plot, reading the book in two or three sittings; I enjoyed the cast of characters immensely. Most importantly I couldn’t see, or second guess, the ending. It also has that wonderful sense of nostalgia with it that only the novels from the golden age can produce. Here’s hoping that The British Library republishes all (over sixty, wow) of Farjeon’s books, if they do I will be one of the first in the queue to get my mitts on them.

I am tempted to advise you, if you have yet to read the book, to grab a copy and cancel all your plans for Wednesday evening. Just curl up with this instead and you will have one of the most enjoyable New Years Eve’s you could hope for. Who else has read Mystery in White and what did you make of it? Were you lucky enough to get it for Christmas? Have any of you read any of the other crime classics that The British Library is publishing? Naturally I want to read all of them now, though they will have quite something to live up to.