Many of you may know, as being so excited I mentioned it a few times, I had the joy of judging  Fiction Uncovered earlier this year. Over the next few weeks (and indeed last six weeks) I will be (and have been) sharing my thoughts with you on the winners, one per week alongside the team at Fiction Uncovered. In the penultimate week this week it is all about Jo Mazelis’  novel Significance which is quite unlike any literary crime novel that I have read before, seriously. 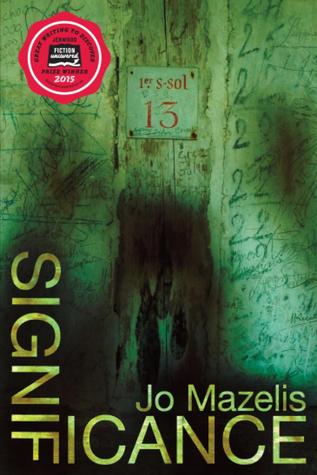 Lucy Swann has run away. She has fled the life she had in Britain to start a new life with no attachments and no history. She has dyed her hair, bought new clothes and changed her image. What we the reader want to know of course is why. What the people in the Northern French town she comes to stay in want to know is who on earth this mysterious woman travelling alone is. Yet just as we, and they, are beginning to get some insight into Lucy (we the old Lucy, they the new invention) she is brutally murdered. Inspector Vivier and his assistant Sabine Pelat are called to investigate and as they do they begin to learn not only more about Lucy but about all the people in the town she ended up in.

Lucy orders a bottle of vin rouge. Madame Gallo watches her from behind the bar, she is middle aged, but her face is still pretty, her hair dark and glossy. She dresses well. Looks exactly right for the part. As does Lucy, who is a runaway in the disguise of a confident young woman with money and credit cards and expensive clothes.

So far admittedly it sounds very like many a murder mystery or thriller you might have read before. However the murder and indeed the murderer and their motive are really the background of the book, whilst remaining the driving force of the novel. I know this sounds somewhat bonkers so let me explain, without giving anything away of course. In the lead up to, and indeed after, the murder of Lucy Swann we not only get insight into her life, we also get insight into all the people that she interacts with even if it just be a random bumping into in the street. Slowly but surely Mazelis spins us into a web of the stories of many of the people in the towns and what their relationships are and what it going on behind closed doors.

Florian looked at Suzette; three weeks ago she had invited him back to her flat. They had drunk tequila together, biting into oranges between shots instead of limes. He had not expected her to suddenly kiss him, but she did. And had wordlessly taken his hand and drawn him into her bedroom. But in the morning he’d had to get up early and was slightly hung-over. She hadn’t given him her number. He hadn’t asked, nor given her his. It was his mother’s birthday so he’d gone to dinner that evening, though he’d really wanted to see Suzette again. The night after that he’d gone to the bar to see her, but it was her day off. Then, for some reason or another, he couldn’t get to the bar for another three days, and the next time he tried she was again not working. More than a week had passed before he finally saw her at the bar, but it was unusually busy and Jaques was in a foul temper. When Florian caught her eye Suzette barely looked at him. He took the hint and left after just one drink.

I loved this element to the novel as we really get into the lives of a whole cast of characters with many mini stories or vignettes interweaving around the main one. This I found gives Significance additional depths to a simple ‘whodunnit’ or ‘whydunnit’ as it shows the secrets that the victim of murder has, how the murder effects a town brimming with secrets and whose secrets and relationships are significant to each other and the murder. It is rather like Mazelis has taken a box filled with all the crime novel/thriller tropes and really shaken it up to see what can be done outside the box. Have I gone too far with that metaphor? Maybe, but it is true none the less. I think I also loved it because I am quite a nosey person, which I think all readers are to an extent as why would be want to read about so many other people’s fictional lives, and this gives you a chance to have a really good route around into a whole host of characters lives. I found the stories of Suzette the bar maid, Joseph a young black soon to be medical student and Marilyn and Scott holidaying with his younger autistic brother to give his parents a break as interesting and poignant as Lucy’s.

There is also a much deeper level to the novel that just an enthralling and entertaining, and it should be said beautifully written (you can tell Mazelis is a poet, the writing is lyrical yet has real pace) and crafted, read. From the title you would imagine that the novel is about the significance of a murder and of course it is, yet it is also about many other significances; the significance we give ourselves and others, the significance we are given, the significance of tiny details or moments and how they can change everything. It is also a book that is very much about perception, the things we notice and the things that we don’t. I was reminded a lot of this novel when I was reading Melanie Finn’s Shame which has been shortlisted for the Not The Booker which is also a sinister tale which unravels in all directions, changes perspectives and expectations as it goes.

It is dark when she leaves the hotel. A boy is standing on the edge of the pavement across the road. Lucy has the curious sensation that she passed him earlier – hours earlier, when it was still light, although the shadows had been lengthening.

I think Jo Mazelis has created something quite unique with Significance. Not only has she created a tense (occasionally quite sinister and gothic) literary thriller, she has also created a novel where the murder is really the back story and the human nature of a collection of people in one town and how their lives and their little actions can create a turn of events. It is a novel that will have you guessing and as Poirot, or Agatha Christie really, said it is a novel where those “grey cells, sometimes they work even better in the dark”, mine certainly did and not just about murder but a whole host of societal issues.

I would love to know if any of you have read Significance and what you thought of it. I would also be really keen to hear if you have read any of Jo Mazelis (who also writes as Jo Hughes) other works for there are lots of them, short stories, novels and non-fiction, do let me know.