One of the things that I said I really wanted to do with Savidge Reads was to try and uncover some books that I hadn’t heard about and therefore maybe you hadn’t and introduce you all, like some kind of book and reader dating site. I think that Byrd by Kim Church is one such book. It is a book I had the pleasure of reading sharing a room with the person who recommended it to me first, the lovely Michael Kindness, and on a bookish retreat in North Carolina which the author was also on too. Yes, Booktopia Asheville, part of my American trip which I still haven’t told you all about – I will honest. Anyway, it is a book that is not released here in the UK but I would urge any agents, editors and publishers to hunt down and publish pronto as it is a gem of a novel. 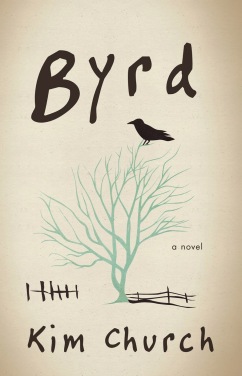 Addie Lockwood thought, as a young girl, she would become a famous writer and marry Roland Rhodes (the boy at school who mainly ignores her) who himself would become the next Bob Dylan. Life didn’t turn out that way. Yes, she and Roland had a relationship of sorts both as teenagers and again in a mad whirl of nostalgic romance in their thirties. Yet these romances didn’t end up as a love story in a fairy tale, instead they ended up with Addie pregnant in her early thirties with a baby she is just not ready for, not now, maybe not ever and so she gives her child, who she calls Byrd as it is a name no one else will ever give him, up for adoption.

Byrd opens with a letter that cleverly sums up all this in a letter, which we later learn social services have advised she writes to her son. What follows on from this are the four main parts of Addie’s life, and indeed Byrd’s, as she would define them; Unborn, Born, Missing, Grown. We follow Addie as she first meets Roland and that flush of teenage awe and obsession over flow her, and then as life moves on reality sets in more and more, the question we are always trying to find the answer to is will Addie, Roland and Byrd ever be united.

Church does many wonderful and admirable things with this novel. Firstly there is the way that it is all structured. As I mentioned the book is made up of four parts, within which there are short chapters which themselves are made of short bursts of paragraphs. This gives the novel a real pace and you whizz through thinking ‘oh go on, just another chapter’ as you race to find out what comes next. Additionally what might have made this confusing, but doesn’t which is a sign of how good Church’s writing is, is that as we go on we see Addie’s life through the eyes of others not just hers. Sometimes we will flip into the head of her brother, mother, father, lover, friend etc and so her character becomes more and more vivid.

Interspersed throughout all this are the letters from Addie to Byrd. In the wrong hands these could have been over dramatised and clichéd pieces of prose that made you want to roll your eyes, stick your fingers down your throat or throw the book across the room (and so could a book with a character called Byrd) yet Church writes these with a brutal and honest clarity which Addie has of her situation that again they add to her character, and not always in good ways, and give a true insight into the way she feels at particular points. It’s cleverly and subtly done, poignant without ever verging on saccharine.

Dear Byrd,
I would like to tell you your father and I loved each other. Maybe we did; maybe love is the right word, though it’s not one we ever used. What I can tell you is, he trusted me. He let me see the purest part of him, the music part.
Trust is a sweet thing, and fragile. I was not always as careful with your father’s as I should have been.

Addie is one of the main reasons you will keep reading this novel, Church creates a brilliantly complex character. She is endlessly flawed. She sleeps with her tutor, she can be horrible to her siblings, she sleeps with Roland without protection and when he has a girlfriend, hides her pregnancy from everyone including Roland, tries to have an abortion and then gives her child up for adoption. In the wrong hands you would read her as heartless bitch or she would be the villain of the whole piece. Instead because we see her as she tries to love her family, with a distance because her father is a bit of an alcoholic and so family life is turbulent when she is young, how she tries to keep her life on the straight and narrow despite temptation and rebellion, how she is with her other lovers in the future etc. Oh and she loves books, winner right there. All in all she is human, she is like us, we have all made mistakes, done some bad things but we try and be better, we try and be the people we know we should be or can be.

Addie believes in books. They are more interesting than real life and easier to understand. Sometimes you can guess the ending. Things usually work out, and if they don’t, you can always tell yourself it was only a book.

I also really admired the way that Church looks at adoption with Byrd. All too often we are given fiction about adoption that looks at the hard and difficult times of a child given up for adoption, rather than how actually their life might be better than if they hadn’t been. Or they will be tales of young mothers who have to give their child away or have them taken away. I have never read a book before where a woman in her early thirties gets pregnant and knows the time isn’t right, and may never be right, so makes what she thinks is the only and right choice. How her choice affects her and those around her is what follows, all told without judgement either way.

If I am making this sound all doom and gloom and a bit melancholy, fret not. Church combats this in a few ways. Firstly there are the short sharp bursts in which the novel is written which means when things get very emotional, and they do, it is a quick pin prick or two. That makes it sound throw away, it is actually very effective because the emotion is intense. Yet she also throws in some wonderful set pieces, some of which come when Addie works in a bookshop and then gets her own and with some of the customers she meets and the second hand books she is given, did I mention this book is very, erm, booky? There are also some wonderful scenes between Addie and her brother Sam in her youth, plus all the awkward moments of adolescence, and then with William later on, which I loved.

William believes that no act, if it’s purposeful, is too small. He protests junk mail by filling postage-paid return envelopes from one company with advertisements from another. Addie follows his example and sends Time magazine the fake check for $58,000 dollars that came from the credit card company.

Too often you read about coming of age tales which focus on your teens as if after that everything is tickety-boo, it  blooming isn’t! When we are young we think that life is all we could want it to be. We think we could meet the prince or princess of our dreams, we think we could one day be superhero’s or if not then surely a life as a vet, pop star, wizard or famous writer awaits us. Life however has other intentions and the dreams we have get turned and twisted a little, chipped slightly now and again by situations we didn’t expect and circumstances we often didn’t ask for. Byrd is a story which conjures that wonderfully, encapsulating the difficult times and yet with a wonderful sense of humour, even when times are tough, and with a sense of hope. There need to be more tales about coming to terms with your ages as you go through your life, Byrd is an example of that. I cannot recommend it enough.

Like I said at the start, publishers here there and everywhere should be fighting to get their mitts on this and publishing it all over the shop.If you have read Byrd then do let me know what you thought of it. If you haven’t then you should be trying to get your hands on a copy. If you have read any gems like this that aren’t published everywhere yet and you think they should be I would love to hear about those too!