Sometimes you read a book and you just can’t stop talking about it. So an apology from me firstly to all who have seen me in the last few weeks and who have come to dread the sentence in our conversation that goes ‘oh my god have I told you about another thing Marieke Hardy wrote about in her memoirs’. I have not shut up about this book. I am also now worried that should Ms Hardy ever stumble upon this webpage she may regret a recent twitter exchange and think I am a stalker, I am not, but more on that tomorrow. I don’t really do celebrity/well known personality memoirs very often but as soon as I learnt that Marieke Hardy had an autobiography/collection of memoir essays ‘You’ll Be Sorry When Im Dead’ out in Australia I had to have it, I had almost bought it online when Allen and Unwin, hearing of my Hardy obsession enthusiasm kindly shipped one over to me.

Before I can talk/rave about the book any further, I should mention how I happened upon its author. I randomly heard tell of an Australian TV book show when I was moaning about how rubbish (they have got better) our UK ones were, a Savidge reader sent me a link to The First Tuesday Book Club and I was hooked. I loved format (one host, two regular guests each month and two fresh faces who discuss one modern book and one classic, the banter, the works I was sold. The star for me was Marieke, a fabulously edgy, ballsy, no nonsense regular guest who wasn’t afraid to call a book a ‘cock forest’ if required. I felt I had found a kindred spirit, be it one who wasn’t aware I existed, but that’s a small thing. She had a passion and enthusiasm about books and reading that had me sold along with a wicked sense of humour. So, what better than her very own book, written by her own hand, to find out more about her? (Note, in a non stalky ‘I just think we would be best pals discussing books and laughing like drains’ way.) 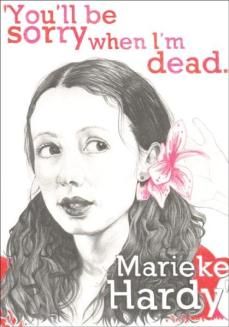 ‘You’ll Be Sorry When I Am Dead’ is one of those books which manages to make you laugh out loud, feel ever so uncomfortable at its honesty, possibly makes you want to cry and then makes you laugh all over again. When someone writes their memoirs it isn’t necessarily that the full truth doesn’t come out, just that the author tends to look at things in a rose tinted way, highlighting their best bits – not so in the case of Marieke.

From the very first memory piece/essay ‘You Can Lead a Horticulture’ we are greeted with Marieke’s no nonsense ‘this is how it is’ attitude, which I like so much and am probably much more like myself in real life than I am on this here blog (maybe this should change), as she discusses her desire as a young girl to become a prostitute because it embodied ‘musical theatre, combined with those illicit first throws of nocturnal explorations beneath an embroidered doona’, and then goes on to tell of a relationship she was involved in where prostitutes became a fairly regular addition (I laughed at her worries of a prostitute assessing her based on how she kept her house). From here we have tales of her friends battle with cancer in ‘Forevz’ which is funny, touching and tear inducing, a hilarious look at the world of swingers, her own obsession and almost stalking of Bob Ellis (who she also named her female dog after), her relationship with her parents, on being a mother but not being a mother (I loved ‘Born This Way’ a tale of accidental step parentage so, so, so much) and her rock and roll slightly hedonistic days.

It is the honesty which I loved about this book so much, and it’s an honesty we don’t see often enough and could be something which caused people not to like this book. In fact Marieke says so herself in the tale of her friends breast cancer as she opens with ‘this is a cancer story that has some jokes in it, so if you think that perhaps that’s in poor taste its probably best you put this book down’ and some people will do just that, but they would be missing out. We do laugh at the worst times, we need this laughter yet some people don’t want to talk about it.

It isn’t just this honesty of situation and others that she looks at, it’s herself. In several of these pieces, almost of admission and letting everything out, she asks people to respond from their side and it’s not always flattering either in the depiction Hardy makes of herself or in the honesty of some of the replies she gets back. Could any of us write something admitting what a rubbish partner or friend we were, send it to the other person involved ask their thoughts and then publish them? I am not sure we could.

Some people will simply not get this sort of book, they will think that its graphic nature (in parts, not in all) and upfront attitude is done for effect, maybe even book sales. They will probably now think I am some kind of voyeur for enjoying it so much. I would disagree, I think some people do those very things but I don’t get the feeling Marieke Hardy is one of them. It’s an honest portrayal, sometimes as I mentioned uncomfortably so, of someone’s life so far with the highs and the lows, the good and the bad, the pretty sides and the ugly ones too. It’s really made me think about life and that jazz amongst the laughter, ‘eek’ moments, and occasionally teary ones too. But more on that thinking tomorrow… In the interim do try and get this book (even if it means buying the e-book version as, so far, it’s not out in the UK, in fact I think it might only be available in Australia) because it’s one that should be read.

It’s early to be talking of books of the year, but I have very little doubt that this will be one of mine. I loved it.