If you had told me at the start of 2012 that I would have embraced the world of classic civilization over the next few months I would have looked at you with a raised eyebrow and the expression ‘I seriously doubt it’ all over my face. My mother teaches Classics and as a child I got all the myths, taken round Pompeii for about nine hours, endless (literally endless) trips round museums with Roman and Greek relics and then ridiculed at secondary school (where my mother also taught) when I got 100% in the Classics exam. I might have studied it further had that not happened and my mother being one of the only teachers who taught it. However this has changed this year, this is in part thanks to two women. One was Madeline Miller and her wonderful debut novel ‘The Song of Achilles’, the other was watching Mary Beard’s ‘Meet the Romans’ which had me hooked and led me to ‘It’s A Don’s Life’ a collection of her blog posts for the TLS. 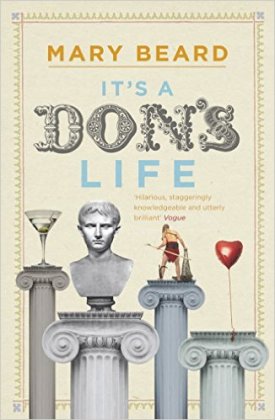 The things that I most liked about Mary Beard when watching her present ‘Meet the Romans’ was her warmth, humour, enthusiasm and the fact that she talks to the audience, which even though you know is lots and lots of people you feel is just you, in a down to earth tone without implying you are stupid. I was relieved, and rather thrilled to discover that as soon as I started reading ‘It’s A Don’s Life’ her blog posts, which read like brief essays, had exactly the same qualities about them. It doesn’t matter if she is discussing the academic world (she is a ‘Don’ after all), her students at Cambridge, politics, Amy Winehouse or a new historic place that she visits, the way she writes is like she is talking to you over a coffee. She never patronises or come across as ‘clever’ even though she clearly is.

“You have to pay extra to visit the harem and technically speaking you can only go round with a guide (parties leave every half hour). But despite fierce notices about not getting separated from your group, none of the guards seemed too much bothered if you hired an individual ‘audio guide’ and wandered pretty much at will.”

Even though I have been completely won over by the way she brought everyday Roman life to, erm, life in ‘Meet the Romans’ I worried that with this collection I might feel slightly out of my depth. I am no Cambridge student after all, though I wish Mary Beard had taught me, and I was worried that as the book went on the merge of the classical history and the academic life might prove too much. It doesn’t and that is for two reasons, as I mentioned before the book isn’t just about Classics and Cambridge, but when it is its insightful and funny ‘Pissing in the Pyramids’, ‘Keep Lesbos for Lesbians’ and ’10 Things You Thought You knew About The Romans… But Didn’t’ are all prime examples of that, there is also the fact that she will throw in sentences and asides that you empathise with and know about through daily life.

“I do have a soft spot for Woman’s Hour. I like the way it squeezes in wonderfully subversive feminist reports next to those drearily wholesome recipes for tuna pasta bake.” 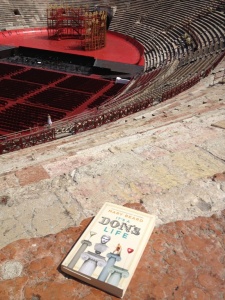 As read in Verona Arena…

I almost want to call Mary Beard’s style of prose a little ‘naughty’ in some respects, on ‘Meet the Romans’ I loved how she gave us the nitty gritty side of Roman times like communal loo’s and tales of murder, here we have more Roman insight and all the Latin words for naughty bits (which I have been telling everyone about since and then praising the book overall) yet I think ‘wry’ is probably a better term for her demeanour.

“Most people go onto Amazon to buy books; easy shopping, and it would be an entirely admirable enterprise, if it wasn’t killing all our local bookshops. Authors, though, sneakily visit Amazon to check how their books are selling… …But what every author wants to know is how many sales does it take to get you zooming up the Amazon ranks. I’ve always suspected we are dealing with single figures here. But proof came the other day when the husband decided to buy 4 copies of his own book on icons, which seemed almost as cheap, and a lot easier to obtain from Amazon than from the publishers. The result was that he zoomed more than 250,000 places up the rankings.”

The second reason that the book doesn’t get too much, I seemed to get sidetracked from this earlier sorry, is that by its very nature this is a book that you dip in and out of rather than simply read it in one or two sittings as you might a novel.

In fact one of the phrases that Mary uses in the afterword of this collection is “The book is also a convenient and portable commodity. No one I know reads their laptop on the underground, in bed or on the loo.” This seems most apt as I have been dipping in and out of this collection in all these places, well, swap the underground for an aeroplane and throw in a Roman Arena as shown above. Whether you know a lot about Classics and the Romans (even if its lain dormant or hidden) or nothing at all I would highly recommend spending some time with Mary Beard be it in book form, blog or on the television, it is a joy and you’ll learn things without knowing it. I am really glad I have the next collection ‘All In A Don’s Day’ in the TBR for similar style reading over the next few months.

So who else is a big Mary Beard fan? (Some of you may know I started a twitter account for ‘The Beardettes’ @welovemarybeard should you wish to follow it.) Are you a regular reader of her blog for the TLS? Have you read any of her other books such as ‘Pompeii: The Life of a Roman Town’ or ‘The Parthenon’, if so should I give them a whirl? I am very tempted.