Without making myself sound up my own bottom or like I am some connoisseur of the genre, but it does take a rather different crime to really make my deerstalking covered ears prick up and I settle down to devour a good crime novel (with my pipe and my smoking jacket) in one big gulp because I can’t get enough. This is exactly what happened when I read The Farm by Tom Rob Smith. He who wrote Child 44 which is one of my favourite crime novels of recent years. Oh, though in reality I don’t actually wear a Sherlock Holmes outfit when I read crime fiction, but it’s an idea. 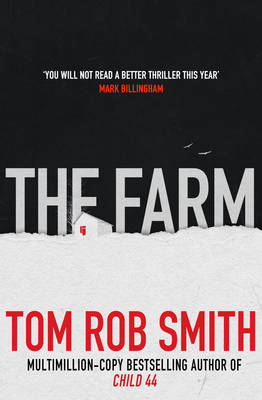 Imagine one day you are on your way back from Tesco/Waitrose (or any other supermarket) and you get a call from your father out of the blue telling you that your mother is unwell, it isn’t something physical or something terminal, your mother has had a mental breakdown of some sort and she believes that something, which your father won’t divulge, dreadful has happened. This is the rather intense and intriguing way that Tom Rob Smith starts The Farm, yet this is only the beginning.

‘Dad?’ ‘Your mother… She’s not well.’ ‘Mum’s sick?’ ‘It’s so sad.’ ‘Sad because she’s sick? Sick how? How’s Mum sick?’ Dad was still crying. All I could do was dumbly wait until he said: ‘She’s been imagining things – terrible, terrible things.’

Things get even stranger, very quickly so I am not spoiling anything, as no sooner has Daniel spoken to his father and packed to head for Sweden (where his parents have moved to) he receives a call from the airport from his mother, Tilde. She has been released from the psychiatric ward she had been placed in by her husband and is about to get a flight to Daniel to tell him her story, a story he might not believe and might implicate his own father in having been part of something very dark and very wrong.

To say too much more about the plot would be to spoil what is a fantastically gripping account of a woman who goes back to her homeland, taking her husband with her, to live a life close to nature on a remote farm which at first seems idyllic and soon turns into a nightmare for her.

Looking out the window I was reminded of just how lonely this landscape was. In Sweden, outside the cities, the wilderness rules supreme. People tiptoe timidly around the edge, surrounded by skyscraping fir trees and lakes larger than entire nations. Remember, this is the landscape that inspired the mythology of trolls, stories I used to read to you about giant lumbering man-eating creatures with mushroom warts on their crooked noses and bellies like boulders. Their sinewy arms can rip a person in two, snapping human bones and using splinters to scrape the gristle out of their shrapnel teeth. Only in forests as vast as this could such monsters be hiding, yellow eyes stalking you.

There are lots of things that are marvellous about The Farm. The main thing for me was the sense of unreliability throughout. Tom Rob Smith has Tilde recount what has happened to her, from her perspective, from start to finish providing items she feels prove her story. These are interjected with questions from Daniel as he tries to understand, as we readers try and figure it all out, and also interjections from his father, Chris, calling trying to find out what is going on and trying to tell Daniel his mother has had a breakdown and isn’t to be believed.

This adds a marvellous sense of tension to the book. Which parent should we believe? Has Chris been part of something horrendous? Has Tilde misread what she has seen with so much additional time on her hands in the remote wilderness, has she escaped to a place of trolls from her childhood, has she gone mad or could she be telling the truth? You are constantly second guessing all of the characters as you read on and just when you think you have taken a side, something happens to make you change your mind. It is a web intricately spun.

What adds to this is the fact The Farm is laced with secrets. As we read on we learn there are many secrets behind the façade of this family (as in real life). Why did Tilde and Chris really leave the UK and head to the middle of nowhere? What happened in Tilde’s childhood which led her to fleeing her home country and makes everyone question her all the more? What is really going on in the neighbouring farm of Håkan Greggson (a brilliantly constructed neighbourhood bully, who I loved to loathe) behind closed doors? What secret is Daniel himself keeping from his parents? Throw in the atmosphere of Sweden with is brooding landscape, mythology and remote nature and how can a read fail to be compelled?

I thought The Farm was superb. Cliché alert, I couldn’t put it down. I read it in just two settings begrudgingly putting it down when I selfishly needed some sleep before waking up very early to get back into it. Tom Rob Smith creates a genuinely thrilling mystery where secrets brood along with the atmosphere. Whilst also being a gripping read it looks at the stories we tell our families and also, more importantly, what we leave out. It also takes an interesting look at mental health and asks some big questions surrounding that. All in all The Farm is a multi-layered compulsively readable thriller that puzzles and provokes. One of my books of the year so far.