I am one of those people who likes to read a book before I see the film and so with a planned visit to the cinema to see ‘Precious’ this weekend I thought that I would read the book, originally titled ‘Push’, by Sapphire. I didn’t really know what to make of it, if you have seen the trailer then you will get some idea, it looks like it could be quite a harrowing movie (though one already to wipe the Oscars clean this year) and therefore you would think it might be fairly harrowing read. The thing with harrowing or tragic tales is that they can also hold infinite hope inside them.

“I was left back when I was twelve because I had a baby by my favher. That was 1983. I was out of school for a year. This gonna be my second baby. My daughter got Down Sinder. She’s retarded. I had got left back in second grade too, when I was seven, ‘cause I couldn’t read (and I still peed on myself). I should be in the eleventh grade, getting ready to go into the twelf’ grade so I can get gone ‘n graduate. But I’m not. I’m in the ninfe grade.”

From the very first paragraph we are taken straight into the world of Precious Jones and truth be told its not a world for the faint hearted. Pregnant for the second time by her own father Precious has grown up illiterate in the back streets of Harlem where the only thing she wants is an education which will bring freedom and opportunity. She lives with her abusive mother who is living off the money she receives for having her daughter and granddaughter living in the house, though in truth Precious’s disabled daughter has been shipped off to her grandmothers while her mother claims the extra money.

As we join Precious she is reflecting on her life and how she came to be in the position she is in and as you come to know her back story it not only makes you sad it also makes you quite angry. Precious is soon kicked out of high school under the pretext of simply ‘being pregnant’. However a teacher takes sympathy on her and has booked her on an alternative education course Each One Teach One. This is, Precious knows, probably the last chance she has of an education along with the likes of Rhoda, Jermaine and Rita (all with dark and unfortunate pasts) but with a second baby due, a mother who doesn’t want her to do anything but be a slave and a means of benefits is Precious really ever going to change her life?

I thought, though in parts it made me angry, that this is one of the most amazing books I have read in a long, long time. It brings home the lives that some people live in modern times who could really be in the same city as we are and we just don’t notice. Though the book is set in the 1980’s this is still going on and actually shows how rather worryingly in some ways things haven’t moved on as much as we might hope. Precious is a remarkable character and a sign of hope in dark times, as are all the girls in her class at Each One Teach One and her teacher Blue Rain, having humour when most of us would give up. Though fictional this book packs a huge punch as you know that these things are really going on out there. We need books like this and people need to read them, especially when they are written with such a blunt (the language is quite out there as are some of the scenes described), compelling, honest, emotional and occasionally funny voice.

I was utterly blown away by this book, I am not sure how I will be able to handle the movie, it left me speechless and with a huge amount to think about for such a small book. Books like this show just why reading shouldn’t always be a safe and comfortable experience, sometimes we need harder stories like this. Its remarkable, not an easy read but most certainly a must read.

I think that this might be the last Simon’s Bookish Bits (and its only the third) of 2009 as next Saturday is of course Boxing Day and I will be doing something a little bit festive and Christmas themed. Well I will if the post sorts itself out as I am awaiting some parcels and yet getting some from November instead… interesting. The week after will be all about Bookish Resolutions and of course be 2010, its getting scarily close.

Now as one year starts another one ends. I am planning to give you a full list or two fo my best books of 2009. You can however have a sneak peak of one of my favourites on the Oxford University Press Blog. I was kindly asked by Kirsty, as one of their favourite bloggers, to give a review of one of my favourites along side the delightful company of Vulpes Libris, Dovergreyreader, Kimbofo, Eve’s Alexandria, Random Jottings and Stuck in a Book. Do have a gander it’s a very interesting selection of choices.

Speaking of Kirsty she has written on her blog the list of festive reading she will be partaking in over the festive period. I have also seen festive bookish posts from Paperback Reader and the aforementioned Kimbofo and Simon Stuck-in-a-Book too. One blogger who I know you can help decide what to read over the season, as you are so good at advising me, is Novel Insights. She wants you to help her choose her holiday reads though none are festively themed she has some corkers to look forward too. I have finally whittled down my festive fiction maybes and they will be…

Peyton Place and Great Expectations aren’t festive reads, but they are two reads I have been desperate to read for the last few months and I like the idea of something salacious and something truly classic. The last two choices are some Christmas murder and mayhem from Agatha Christie and Agatha Raisin. Mind you I say first, they haven’t actually turned up though some lovely books sent in November have which is nice…

Looks like I have some more crime to go. In the world of podcasts it’s a little out of date in parts but my podcast of the week is from Faber and Faber. I only found it yesterday and there were so many podcasts they had I wanted to listen to by some of their top authors it was a gem of a find. Pop to their homepage, scroll down and you can download them all.

Now finally something not bookish at all but I had to share with you all a little bit of pre-Christmas joy that I have bought myself. I have been looking for one of these for absolutely ages to go on my new desk and finally I find one… 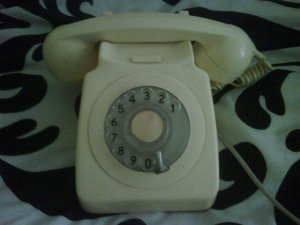 That’s right an original 1980’s dial phone… for £2 and its been converted for new phone lines already. I was ecstatic. Right that is me done and dusted for now. So what’s been going on in all of your bookish worlds this week? What books have you loved? What are you reading at the moment? What’s news?