One of the things that I have always wanted to do with this blog, and I suppose my reading by default, is find some lesser known gems that I would love to get to more readers. Nothing against the big books that get a lot of buzz, as they can be irresistible, there is just something wonderful about finding a book that hasn’t had much buzz (or as much as I think it should) and getting it into the hands of eager readers. Moonstone by Sjon is one such book. This was a book that I discovered towards the end of last year and has become one of my favourite reads of the last several years. I loved it when I read it; the more time away from it I have had the more wonderful I think it is. Yes, one of those. 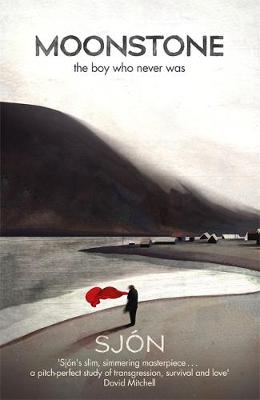 Moonstone is set in the Reykjavik in 1918. Iceland is a country that is on the cusp of huge changes. Some it is aware of like the decreasing amount of coal resources , along with the eruption of the Katla volcano. Some are happening along in the background, such as the Great War. Some it is yet to know will happen, like the craze for film and cinema or something much, much darker that will change the country and its people forever, the Spanish Flu. Yet aware or not, the people of Reykjavik carry on as normal and we follow one of those people, a young man named Mani.

Mani is unaware of all these things going on in the background because as Moonstone begins it is more the day to day dramas that are at the forefront of his mind. For Mani is a young gay man who is paid for sex, which on the whole he enjoys, both the act and the money. However this is a time in which homosexuality is not something that the people of Iceland believe in and so one of his biggest thrills, and of course income, is also one of his biggest dangers.

After the boy had crawled in through the window of his hotel room and they had begun to take off their clothes, the man unfastened the artificial leg made of hardwood that was attached with a leather harness to his right thigh.
The boy had never seen such a device before and examined the leg from every angle until the man took it away from him and hung it from the foot of the bed. He drew Mani Steinn under the covers to join him:
– Moonstone.

What I found so gripping about Moonstone is firstly the story of Mani, but also the story of Iceland itself and then how the two intertwine and almost shadow the other. In many ways Iceland, and really more specifically Reykjavik, is the second biggest character in the whole book, and we follow them both as Mani has his most personally tumultuous time yet and Iceland has its most historically tumultuous time yet.

Although, as a rule, little in the papers captures his interests – anything that happens in Iceland seems too small, while overseas events only affect him if they are grand enough to be made into films – the news in the last few days about the “Spanish Flu” has held a lurid fascination for the boy:
He has a butterfly in his stomach, similar to those he experiences when he picks up a gentleman, only this time it is larger, its wingspan greater, its colour as black as the velvet ribbons on a hearse.

Throughout the book there are many heart breaking moments, something I do really love in a book which I am aware makes me sounds rather like a weirdo. There is firstly the fine line between Mani’s  There is a poignant element of the cinema craze story line, which we see as Mani becomes almost as addicted to the cinema as he does to sex with men. As more films come to the city the more the religious and traditional members worry that it is a sign of the devil, leading teenagers into sexual temptation, or worse, modern thinking. This belief of evil gains all the more traction when Spanish flu hits and it becomes one of the places that causes the most contagion without anyone knowing. Imagine then how homosexuality might be treated, if cinema can cause such outrage. This is an unwritten realisation that comes to Mani creating a danger in being caught but a potential financial opportunity in the need to keep everything all the more secret. Things take a darker turn but I don’t want to spoil that for any of you.

In the Irish Times review of Moonstone Ruth McKee describes it as “Opening with a graphic scene of oral sex and closing with penetrating philosophical questions, Moonstone is quite a ride.” And she is completely right. This is a mini epic that gives and gives to the reader. Every page thrums, hums and/or brims with feelings, atmospheres, tensions and emotions. Whether it be with the wonders of cinema that fascinates the villagers or the natural awe of a volcanic eruption. Whether it be with a sexual thrust (quite literally) or with the panic and horror as a plague takes over the country.

Reykjavik has undergone a transformation.
An ominous hush lies over the busiest, most bustling part of town. No hoof-beats, no rattling of cart wheels or rumble of automobiles, no roar of motorcycles or ringing of bicycle bells. No rasp of sawing from the carpenters’ workshops, or clanging from the forges, or slamming of the warehouse doors. No gossiping voices of washerwomen on their way to the hot springs, no shouts of dockworkers unloading the ships, or cries of newspaper hawkers on the main street. No smell of fresh bread from the bakeries, or waft of roasting meat from the restaurants.
The doors of the shops neither open nor close – no one goes in, no one comes out – no one hurries home from work or goes to work at all.
No one says good morning. No one says goodnight.

I could wax lyrical about Moonstone for much, much longer, however I feel that a succinct rave suits a succinct masterpiece. Yep, I said it, I think that this is genuinely a mini epic masterpiece. It is a book that brims with emotion, has an incredible momentum and shines a light on both a period of a (possibly grimly) fascinating period in history that I knew nothing about and also many voices that went unheard and even unseen. I wanted to go and read it all over again when I was choosing the quotes to include in this review. I also now want to read everything that Sjon has written so far and go back to Iceland and explore it all over again. Utterly fantastic, if you haven’t read it then please, please, please, please get your hands on it.