A Girl is a Half Formed Thing – The Play

Tonight* I have had the pleasure, if pleasure is the right word, of watching what might be one of the most intense, brilliant and gobsmacking pieces of theatre and acting that I have ever seen in my 34 years. Seriously, that good. 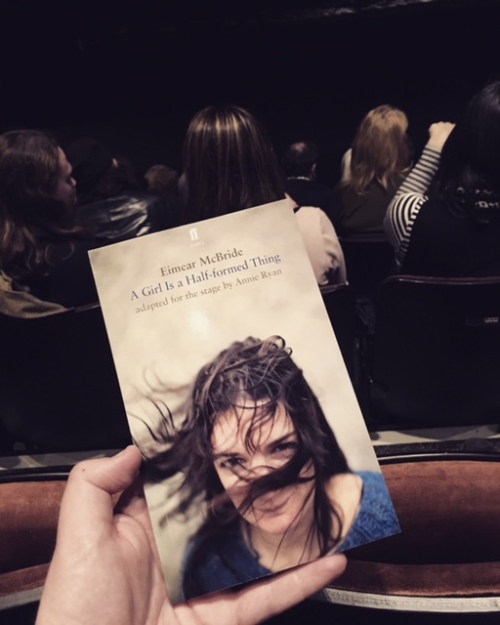 Tonight I have had the experience of seeing Annie Ryan’s adaptation of Eimear McBride’s incredible novel A Girl is a Half Formed Thing which I read (and was bowled over by) back in 2013, which went on to win the Baileys Women’s Prize for Fiction and the Goldsmiths Prize the following year. Without giving too much away the novel is a tale of an unnamed young woman from just before her birth to her early twenties, all told in a rush of quite unusual language, which Ryan has used and condensed to create a one hour and twenty minute monologue, here is a taster…

For you. You’ll soon. You’ll give her name. In the stitches of her skim she’ll wear your say. Mammy me? Yes you. Bounce the bed, I’d say. I’d say that’s what you did. Then lay you down. They cut you round. Wait and hour and day.

This one woman show is all given to you, and I want to say given rather than acted or performed because it is lived and literally given to you as an experience, by Aoife Duffin who is nothing short of phenomenal. Not only does she manage to remember 80 minutes of dialogue (which I do not understand how anyone could do) she manages to make her own face and voice contort into a whole set of other characters and the unusual language seem utterly understandable. You are shocked, you are saddened, you cringe and quite often you cackle with laughter. 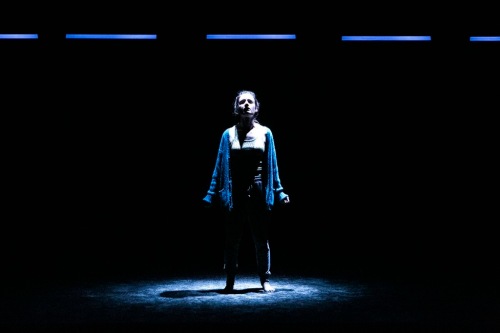 If you are worried you haven’t read the book then don’t, I went with my friend and colleague Jane and she was as spellbound – and this is a woman who has fallen asleep in a show (the night before with her family) and walked out of one half way through (with me, though I stayed and shouldn’t have) because she wasn’t enjoying it. She is now really, really keen to read the book and I am really keen to give the play a read to relive it all.

Can you tell I rather loved it? Understatement of the year, I thought she, and the play, were just absolutely incredible and had to share it with you. Here is a small taster of the play…

Sadly the UK tour has ended. I am really hoping that someone like BBC Four or Sky Arts, or even better BBC One or Channel 4  will have it on the television at some point because it should be seen, or heard on the radio. However if you are in the USA then you are in luck as I believe that it will be heading to New York in the not too distant future, so keep your eyes peeled for further announcements and whatever you do get yourself some tickets. It is quite unlike anything I have ever seen before and I thought it was utterly, utterly fantastic.

You can see my review of A Girl is a Half-Formed Thing here and hear Eimear McBride in conversation about the novel with me on You Wrote The Book here.

*This was written on the night that I saw A Girl is a Half Formed Thing I have just been so busy reading the Bailey’s longlist or having food poisoning my reviews have been a little delayed and out of kilter, oops.