On Monday night I was lucky enough to get to have a wander behind the scenes at one of the UK’s big publishing houses. The kindly souls at Picador and Pan Macmillan has asked if I would attend (I dragged Novel Insights along with me) an evening in their new offices to listen to some of their authors reading. Baring you all in mind, as I always do, I made sure I got a cheeky snapshot of their fabulous book filled reception. I cannot tell you how hard it was not to get on that ladder and fill my man bag, I managed, I know not how.

As I mentioned we were there to have a listen to some authors who were; John Butler, Stuart Evers (who you may know from The Guardian, Twitter etc), Sunjeev Sahota and Naomi Wood. Now if you haven’t heard of these authors that might be because they are new authors, in fact I think all of these were debut novels/collections (I could be wrong), and also their books aren’t actually out until 2011.

I can say they all sounded rather exciting John Butlers being the adventures of a young man in San Francisco in the 1980’s – his reading made us all laugh, Stuart Evers debut collection looks to be a gem if the one tale  ‘What’s in Swindon’ is anything to go by. Sunjeev Sahota’s tale ‘Ours Are The Streets’ sounds like it could be quite a hard hitting yet very funny novel, plus he additionally won me over being from my homeland of Derbyshire. Naomi Woods novel then went and won both Polly and I over being set in Newcastle (where we went to school together) in an England we don’t recognise because it’s based on and England of extreme secularism. Sadly they weren’t all in print or proof stage but I did manage to smuggle two of them away which at the end of an evening of bookish chatter and wine was perfection… 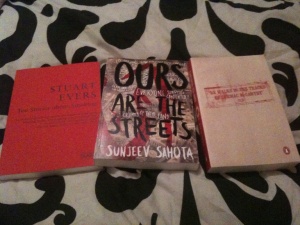 Oh yes you may notice I have included a copy of ‘Caribou Island’ by David Vann (I did so like ‘Legend of a Suicide’) in the picture and that’s because it sparked my first mini theme in today’s post… books of the future, in this case books of 2011 specifically. I am hopeless at knowing what is coming out (I seem to have come off lots of publishers catalogue mail outs sadly) in the future, although 2011 is only actually 3 months away, so I wondered if there were any titles that you have started to get really excited about coming next year? I haven’t really got a buzz for any apart from the ones above.

I thought I would use this as an excuse to mention some books of NOW in the meantime as some lovely parcels have been popping through the letter box in the last fortnight or so and I love your thoughts on these loots so I thought I would share them with you. (Sorry for the picture quality, its dreary in London and my iPhone has no flash, I will try and do another anon.) Anyway I have had;