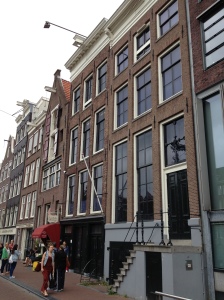 As I showed you the other day, the streets of Amsterdam are quite a site to behold as they wind along the canals. Every street has its sense of peace and quite, there is no real hustle and bustle on theses roads, maybe a little on the ones that interconnect them perhaps. As you walk down Prinsengracht, which I often did as my hotel was on it, I would take in the houses as I headed towards the centre of the town, beautiful town houses with their own sense of history yet ultimately unassuming. Houses including this one here ——-> only this one does stand out a little the nearer you get as along side it’s next door neighbour, then through the square, then around the church nearby is a huge throng of people (apparently starting at before opening ours until the last possible moment every single day) all waiting for the unassuming house you see is the home of Anne Frank’s, or was when she and her family were taken into hiding from the Nazi’s.

I read Anne Frank’s Diary for the first time not too long ago. My impressions were a little mixed. It was a book that initially I was a little worried I wouldn’t get on with as I wasn’t sure about Anne herself. Now some people might be up in arms about this but actually there’s a fascinating exhibition on Anne once you’ve been through the house that showed all the sides of Anne, a brave but brilliant thing to do. I found when I got a rounder picture of her the more horrific what befell a normal young girl who happened to be born in the era she did. Yet actually I think this just added to the experience of visiting the house which was, for me, a deeply moving and disturbing one.

The experience of being in her home is a shocking one from the start, so shocking a fellow visitor was actually physically ill as we entered the first room which showed videos from the concentration camps. A silence befell all of us that then walked on throughout the warehouse cum house and the more we learned of the history of the family and their escape there. Yet it isn’t until you come to the famous ‘secret bookshelf door’ that it really hits you that these were scared people hiding for their lives. Anne’s diaries inform us of this and yet looking back I realised how brave and upbeat she was considering and a wave of emotion hit me I wasn’t prepared for. 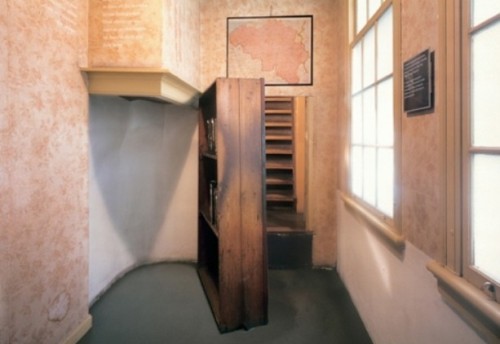 As you climb the steep staircase onwards it hits you even further, a family, and additional couple and a male friend all in these confined spaces. How must Anne’s parents, and indeed Anne, really felt about her sharing such a small space with a strange man. How could they have coped in such a confined space? 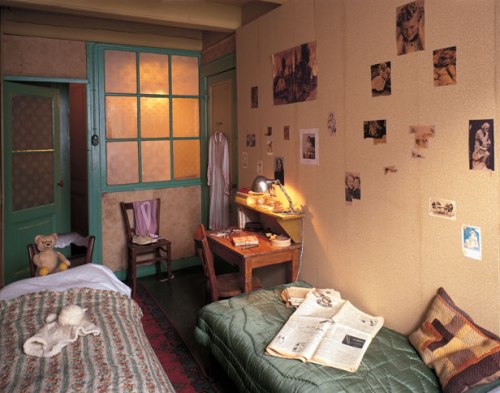 Obviously having read her diaries I had known they had all had their moments. Yet nothing prepares you for how small it all really is. How cramped, and claustrophobic. The room above May look all jolly but it’s a replica of what the room was like with light, when you’re there the lights are off as they would have been, curtains drawn during the day, in order to remain so hidden. The more we went on the harder it was to believe Anne and her family coped with it all, but what choice did they have? 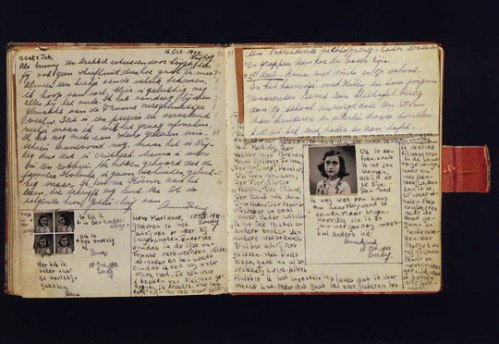 I had always felt a bit funny about the idea of visiting Anne Frank’s house, a bit like hearing people visiting concentration camps, I was concerned it might be inappropriate/car crash tourism. Having now been myself, seen where Anne Frank lived in those conditions and the exhibition about what happened to her, the family and many of her friends I have changed my mind. It isn’t for the faint hearted, some of the videos and accounts you see and hear are incredibly disturbing (on more than one occasion I was reduced to tears) yet we must never forget these people and what happened and try and stop it happening in our world now. The fact so many people are going to see Anne Frank’s house and reading her diaries for me is a sign of hope for future generations. May they always read and remember.

The Anne Frank House is situated in the centre of Amsterdam at Prinsengracht 263-267. A huge thanks to Holland.com who sent me to Amsterdam for work and then managed to get me an advance track ticket into the Anne Frank House, a place that, along with all it holds, will stay with me forever. Also note only the top picture is mine, pictures cannot be taken throughout so I have borrowed these from many sources.