I have not long just been online to renew my library loans and am now feeling rather guilty. You see I currently have fifteen books out… and I have renewed them for the THIRD time, eek! The problem is that when I look at them all I still don’t want to cull any, even though I know there are other people who might have read them and returned them by now. (Actually having said that no one has reserved them and they could have.) Also, I do feel I shouldn’t be getting books from the library, as I do have a library of my own indoors. Oh it’s a bit of a dilemma really isn’t it?

I do want to read them all, its just not knowing where to start. I am off in Manchester for a few days so am only talking library books with me as my choice reads as I really do need to get through them, I am not allowing myself to press the renew button one more time. I am not!

Do you ever have a library loot dilemma? Any advice on how I should stop this naughty habit? Recommend any of these titles get read instantly, I always love your recommendations? What have you taken out of the library of late?

I haven’t mentioned the library for a while. Partly because I am sulking with my nearest (which has been done up and looks quite amazing, though I don’t like self service in a library, it just seems all wrong) because since re-opening they still think I have a book that I gave back over 2 years ago and now every time I go there we have a very tiresome and long winded conversation about how I gave it back, they then closed and no I don’t owe them £7.99 for a replacement book!!!! It is most infuriating and puts me off going to be honest.

Right off my little drama soap box, though I do feel better for a vent! Anyway I have been to some of my ‘sort of’ local libraries and this is what I have picked up of late… 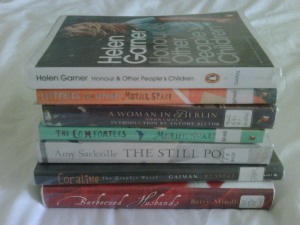 So that’s my lot of latest library loot! Oh and speaking of library loot can we all send our best ‘get well soon vibes’ to Eva of A Striped Armchair. I am missing her blog lots, especially her library vodcasts!

What have you got from you library of late? Have you read any of the above?

You may have been wondering why I have been getting rather focused on Brazilian literature in some posts of late even leading me off to Daunt Books to do some research (yes winners of those bags and some surprise books are at the bottom of today’s post). Well as I am off there for a while in November I decided to set up a little sort of ‘reading expedition/challenge’ in the lead up to that date that I hope you will all join in with in some form or other into the foreign lands of Brazil (unless you already live there of course).

It was a conversation about Brazil that originally sparked all this off in my head when one of The Converted One’s best friends said to me ‘you know you should immerse yourself in the Brazilian culture and history before you go, and you are a bit of a book geek to why not read yourself silly about it’ and so I thought ‘well why not?’ It was then another conversation where The Converted One said ‘when you get back from Brazil you will be buying and reading books for England’. And I thought ‘well why not twist that phrase and before I go read for Brazil!’ So now I am planning on doing just that. (Thanks to Kim of Reading Matters who has done my lovely logo’s!)

I am aware that I did say back at the beginning of the year that I would avoid all reading challenges; however that hasn’t stopped me from doing the NTTVBG and Persephone Reading Week etc, etc. So I am breaking my own rules again and have been off through the TBR looking for books that fit the criteria and I am most surprised by how many I already had at home… 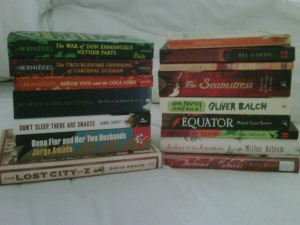 I am already thinking that ‘The War of Don Emmanuel’s Nether Parts’ by Louis de Bernieres, ‘A Handful of Dust’ by Evelyn Waugh and ‘The Seamstress’ by Frances de Pontes Peebles (which sounds like a Brazilian Sensation novel set in the 1920’s and 30’s and really rather brilliant) would make two great choices for a read-a-thon if anyone is up for it?

I have also been researching what books I don’t have, which of course is most vexing because a) I am on a book buying ban and b) most of the books I would love to read aren’t available in the UK – so if any of my US readers spot anything by Clarice Lispector or a wonderful sounding crime series by Luiz Alfredo Garcia-Roza which starts with ‘The Silence of Rain’ then do let me know as I am most open to Brazilian Relief Parcels hee, hee. There are lots of authors though who I have heard of and don’t own whose titles I will be hunting down in the library such as John Updike, Sylvia Townsend Warner, John Grisham etc. I have in fact added an all new page ‘Reading for Brazil’ which has more details of these authors and more plus more information on the lack of rules around this ‘challenge’. So do have a gander.

So will you be joining in with some of the titles? I would soooooooo love it if you did (and so would The Converted One) if you are let me know, if enough of you like the sound of certain titles maybe we could do some reading along together before November which might be nice? Oh and feel free to let other people know about it too! Hopefully you will all catch the Brazil bug (if only in terms of fiction)!

Oh and the winners of the two Daunt Bags with some surprise books thrown in are… Suejustbooks and Jodie (in true Brazil colours), well done Jodie thats two wins in a few weeks!