There are a lot of should have’s going through my mind today. I should have responded to all the lovely comments you have left. I should have written lots of reviews, one of which should have been of ‘The Quiet American’, and scheduled lots of posts. Shoulda, woulda, coulda… I haven’t! Sorry.

In fact I have been struggling to get through ‘The Quiet American’ as I have been reading it on my e-reader which I have noticed I zone out of quite a lot, possibly because I am spending too many hours staring at a screen at the moment. It has now arrived, along with the other three Greene For Gran titles, so I can get back to the ‘actual’ book. Two copies actually arrived so I will do a giveaway when I review it, finally.

Things have been c-c-c-c-c-c-c-c-c-c-c-c-razy with work as we get to the last week before Liverpool International Music Festival launches and I have been spending most of my time sat in front of a computer and so to then sit and type anything has seemed like the last thing I have wanted to be doing. In fact my reading has slowed down again because I am spending most of my free time either running (don’t laugh, I am training for a marathon – more on that soon) or just chilling out in front of some appallingly trashy telly that I simply won’t mention because even if you swore you wouldn’t you would judge me.

One of the other things I have been also been doing is going to book groups. Not one book group, but two! One of which I mentioned earlier in the week because it meant I had the utter joy of reading ‘The Princess Bride’ for the first time, I have seen the film umpteen times (it is one of my mother’s favourites) but never touched the book. It was an interesting, and rather large, group though the book didn’t get that much air time. I think most of the people felt it was a fairly entertaining romp but nothing more, which made me stay quiet from declaring my love for it. They are reading a lot of books I have read already, which is not their fault, so I will probably go back and see how they discuss ‘The Reluctant Fundamentalist’ and decide if I stay or go. Does that make me sound like a bit of a pompous/fussy/arrogant twat? I don’t mean it to.

I went to another one today (Gran would be so proud being a book group addict herself) where they were discussing ‘Little Hands Clapping’, by one of my favourite authors Dan Rhodes. It is an LGBT group and much smaller than the other one but blow me down we were nattering about the book over a coffee for 2 hours (well with several tangents) which flew by. They meet less regularly but the books they have read are lots I have missed, including the next one which is ‘May We Be Forgiven’ by A.M. Homes which I came home to dig out and discovered this… 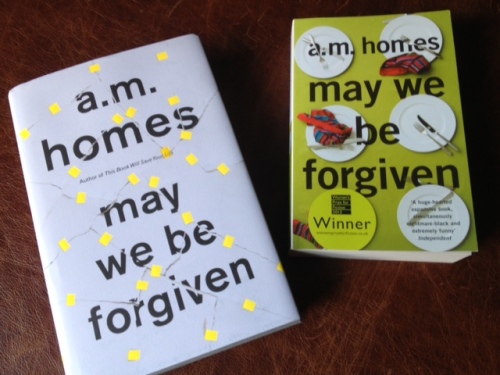 Yes another book I have two copies of! I think I am going to keep the hardback over the paperback, it’s heavier but the type is bigger and it’s a first edition – oh and I like hardback cover sooooo much. It has reminded me though that I am in dire need of a book sort out, and I need to be ruthless, really ruthless. I am going to start on the shelves below soon and really ask myself ‘did I buy it or ever ask for it, do I think I might read it anytime soon, would someone probably like a copy more than me, etc.’

I am going to really go for it tomorrow and I shall report back. What is news with you? What have you been reading? How are you getting on with your Graham Greene’s if you have been reading them? What else do you have to report?

Back into Book Groups…

Thank you for all your nice thoughts when you popped round for tea and biscuits last week , lovely to catch up with some of you, even though I proceeded to vanish again I did read all your comments. Now that I have actually managed to be at home for a few days on the trot, though I am back off to Derbyshire to see Gran this weekend, and have actually managed a few days of no work and just ‘being’ I have to say I am feeling slightly more normal and caught up with myself a bit – not quite fully but not far off.

Anyway, today I am going to talk to you about book groups because back at the end of last year I said that I wasn’t going to join any more. In fact I think I said I would just stick to doing The Readers Book Club with the lovely Gavin every month, and we have. Oddly we had to have a small crisis meeting about this the other week as over the last few months we’ve been having a bit of a nightmare. Authors have vanished meaning we couldn’t record with them, three publishers promised us books then withdrew last minute making us look a bit stoopid and we thought ‘right, let’s sort this out’. So, we have decided to go seasonal and from now on every three months we will announce three books in advance so people have more of a change to read along and get involved. The summer selection was announced yesterday and here they are…

So hopefully this will entice some of you to read along, have discussions on our blogs on the same day and even (fingers crossed) get questions to us and possibly appear on the shows when they go live. What say you?

Thinking about book groups then made me realise how much I have actually missed being in one. To be fair when Gran has been lucid we are still talking about books but as she can’t read I haven’t been able to introduce the idea of an ‘End of Your Life Book Club’ ala Will Schwalbe which we had thought to, though as we are listening to the same audiobooks when together maybe that counts? Regardless of that I decided it might be nice to join one, something I am actually rather nervous about as I have tended to start (and then leave the city within months/a year) book groups in the past rather than join one with friendships already running through it.

Yet the lovely Rosario lives in Liverpool and had invited me to join the book group she is in when I moved over here and I initially said yes but then got too busy with everything. However now, after a slightly humble email from me, I have asked to rejoin and if I can get a copy of ‘Watchmen’ from the library in time I will be joining them next week. If not I will be joining the month after for ‘The Murder of Roger Ackroyd’. From Alan Moore to Agatha Christie, that sounds like my kind of book group! I also caught up with one of my best friends from secondary school, who I hadn’t seen for sixteen – yes SIXTEEN – years but now live two miles from, yesterday and we joked about one on the Wirral. Could I handle two? Well Gran was in three, so maybe it is in the genes?

So what are your thoughts on the Readers Book Club Summer Selection 2013? Have you read any and what did you think? Also do you have any tips for me as someone joining a book group that has been going a while? Are you in a book group and how are you finding it, and what are you reading, what have been your groups highlight reads? Any of you love books but can’t think of anything worse than a book club, just out of interest?