I had a hunt through my blog and as far I could see (at first) I’d never done a post on ‘Books About Books’ even though I have read a few. Way, way back someone delightfully sent me a copy of So Many Books So Little Time by Sara Nelson which you can’t get too easily in stores (though possibly on some certain sites) and more recently So Many Books by Gabriel Zaid and then of course there was Howards End is on the Landing by Susan Hill earlier in the week. The latter is possibly what initially made this subject hover on my horizon.

Then there was a post by Simon of Stuck-in-a-Book fame who wrote about a book (and also mentioned in HEiotL) which I simply had to get hold of once I had finished reading his review. This book was The Paper House by Carlos Maria Dominiguez which I discussed with you yesterday. I know this is a fictional book about books rather than a proper non-fiction book about book but isn’t that just as delightful? Now instead of rushing of to a certain shopping site or a certain High Street chain I went and had a look on Read It Swap It as why not swap some of my cast off’s for something I really want, plus something that at 102 pages is nice and small so wouldn’t take up too much space. What do you know there it was (plus a copy of another book or three I really wanted) and today it arrived, but not alone as you can see. 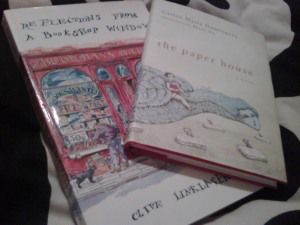 Along with The Paper House the lovely sender Caroline had sent me another book called Reflections From A Bookshop Window by Clive Linklater. Not a book I had heard of at all though one that seems very me as the card inside mentioned “Hi Simon, I thought you might like another book on a bookish theme.” Isn’t that just so lovely, it keeps your faith in the book loving community! It was just what I needed after I have been getting a panning in some circles, which we will quickly gloss over, and so this looks a total and utter joy. I also didn’t think that anyone on Read It Swap It would know I have a blog or am such a book obsessive she must be psychic. It’s utterly made my week, naturally Caroline has received a thank you email and low and behold in the response she does indeed read my blog! How very random.

As for Reflections From A Bookshop Window I can’t find any blurbs for it anywhere, though some very good reviews which lead me to believe it’s the tales of a bookseller, and these are all genuine tales, of books and possibly more interestingly in a way the book buying and bookselling public. I opened one page and I was hooked and had to stop myself from turning another page and another and another. This is being reserved for after No Name and a lovely Sunday lie in.

So then I had a meander through my books to see what else fell into this category. I also then found my post on books about books (typical!) that I knew I must have written, and saw I had a few more. Out of the corner of my eye my wonderful old first edition of Daphne Du Maurier’s memoir/autobiography Growing Pains held my attention, and I thought what about books by writers on writing? I loved Stephen King’s book On Writing so maybe I should read more? I have since accidentally, I don’t know how it happened honestly, purchased a copy of Negotiating With The Dead which is Margaret Atwood’s book on writing and writers, so I am thinking one or two of these a month will make for some interesting reading.

Are there any more, I am sure there are, that I have missed? What’s best writers autobiography that you have read? Which author are you desperate to see write their own autobiography? What books on books, be they fictional or not, really shouldn’t be missed by a reader?

There will be a bigger post on ‘books about books’ and also on how this book and a surprising little bonus came into my hands tomorrow… but for now I will, if you will indulge me, give you my thoughts on a book that both reading HEiotL and a post that the lovely Simon of Stuck-in-a-Book lead me to which is a fictional book all about books called The Paper House and is one that starts with someone being killed by a secondhand book, can you imagine such a thing?

One day in the spring of 1998, Bluma Lennon bought a secondhand copy of Emily Dickenson’s poems in a bookshop in Soho, and as she reached the second poem on the first street corner, she was knocked down by a car.

It is with this very death that the novel, though I would say it was a novella though I do get them confused I will admit, starts. Though it is in fact the events after the death of Bluma Lennon that the book is in fact about, for not long after her death a parcel is delivered for her containing a cement covered copy of The Shadow Line by Conrad. The person who picks this up on her behalf is her Cambridge colleague. It is also he who then goes on a mission, to Uruguay, to find the person who sent the book a Mr Carlos Brauer, a man who in local book circles is renowned as one of the great bibliophiles. It was when the book collecting is discussed that I found myself thinking ‘oh I so agree’ which happened a lot.

It is often much harder to get rid of books than it is to aquire them. They stick to us in that pact of need and oblivion we make with them, witnesses to a moment in our lives we will never see again. While they are still there, it is part of us… Nobody wants to mislay a book. We prefer to loose a ring. a watch, our umbrella, rather than a book we will never read again, but which retains, just in the sound of its title, a remote and perhaps long-lost emotion. The truth is that in the end, the size of a library does matter.

Not only is this a quirky unusual mystery it is a book about books and one that any book lover will happily devour in a sitting or two as I did. It looks at how different people collect books and what makes collection books such a joy to each individual as well as the pleasure gained from reading. However it does in some cases give a forewarning of the costs a serious book addiction and not money something much darker indeed. Though there is no real depth to any character, apart from Carlos into whos obsession we very deeply go, it is beautifully written and you go on an unusual bookish and mysterious journey with the narrator.

I thought this was a very clever book which managed to pack in a huge amount in just over 100 pages. It seems to genuinely get into the mind of a true book lover which I can only assume is a quality that the author has within himself. I thought that the start of the book was quite a darkly comic way to start the book as the narrator tells of his grandmothers thoughts on books and reading “stop that, books are dangerous”. Also with the dark sting in the tail of the tale it covers all peoples attitudes to books from the unimpressed to the obsessed and that makes for a very intriguing and unusual read one that I am very glad to now have on my shelves. It has also left me with a list of more books that I really want to read, and what more could you want from a book about books even if its fictional?

To build up a library is to create a life.

I am amazed that this book hasn’t been more heard of, though as the book itself goes on to illustrate (ooh which reminds me there are lovely slightly fable like illustrations in the book the whole way through) with the world be so full of books how can we know all of them let alone read them all? I think anyone who likes books should while away an hour or two with this, it certainly did the trick of cheering me up after a fairly rubbish Thursday. Oh for the weekend, back to Sensation reading and catching up on rest and all your blogs. Do you like the idea of The Paper House? What could be the pitfalls of having too many books or can there not be one?