I haven’t done a post on the latest incomings at Savidge Reads for quite a while. In part because my new temporary HQ didn’t seem to get any post for a while, and then it got deluged which was lovely, and also because I have had too much to natter about instead. I then thought ‘ooh hang on maybe I should do something different in 2011’ and so at the end of each month I will pop a picture of just what comes to Savidge Reads be it bought, a gift, an unsolicited proof or a request etc. I know there is a divide of opinion on these posts and I fall into the ‘love them camp’ as I really like seeing what everyone else gets so am assuming a few of you feel the same. I also like getting your feedback on what you have read that’s in the mix and how you felt about it, or what you might want me to read in the future should my whim take me.

So here are the paperbacks… 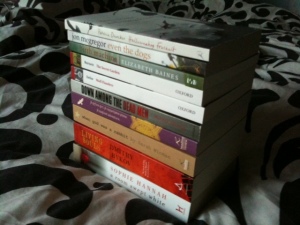 Hallucinating Foucault by Patricia Duncker – I have to admit that I asked for this one from the lovely Alice at Bloomsbury after it came up in conversation loads over Christmas and New Year with several new bookish northern friends saying I simply had to read it. I have and thoughts coming soon.

Even The Dogs by Jon McGregor – another treat from Bloomsbury as one of my bags of books got lost in the move, seriously I can barely talk about it hence why I haven’t on here, and I had arranged a mini rogue book group between myself and the author Isabel Ashdown on it but couldn’t find my copy so will also be discussing this soon.

The Birth Machine by Elizabeth Baines – I got an email from Elizabeth seeing if I wanted to give her book a whirl and after seeing “Out of print for some years, “The Birth Machine” is now reissued in a revised version (which first appeared in 1996). Still very relevant today to modern Obstetrics and Medicine, “The Birth Machine” is however more than that: it is also a gripping story of buried secrets and a long-ago murder, and of present-day betrayals” I thought ‘yes I do’.

The Secret Garden by Frances Hodgson Burnett – This turned up as quite the surprise from OUP and I am delighted as I loved her novel ‘The Shuttle’ but have never gotten around to this children’s classic of hers.

Moll Flanders by Daniel Defoe – I read this classic romp a few years ago but OUP are reissuing it so I might give it another whirl, or it can replace my rather battered old copy on my shelves for a re-read in the future.

Down Among The Dead Men by Michelle Williams – I have a strange fascination, though not too morbid a one, with death and since reading the wonderful ‘Stiff’ by Mary Roach I have wanted to read a few more along these lines and Michelle’s year as a morgue technician will make an interesting non fiction read. I saw it on amazon and had to send an email to the lovely Constable and Robinson who publish my favourite ‘Agatha Raisins’.

The Oracle of Stamboul by Michael David Lukas – This was a surprise parcel, I know nothing of it except the fact it’s got a lovely cover.

When God Was A Rabbit by Sarah Winman – Really excited about this one as a few people I know have already read this debut novel (which is getting a lot of press already as a Waterstones 11 choice) and I have heard some great things. The font though is shocking so I might struggle which worries me a little.

Living Souls by Dmitry Bykov – I really want to read more translated fiction from all over the globe in 2011, a mini whim challenge if you will, and this Russian translated book published by Alma Books looks set to be right up my street. “Living Souls follows the lives of four couples struggling to escape the chaos and stupidity of the war around them: a teenage girl who adopts a homeless man, a poet turned general separated from his lover, a provincial governor in love with one of the natives, and a legendary military commander who is sleeping with the enemy.”

A Room Swept White by Sophie Hannah – I bought the latest in one of my favourite crime series in a charity shop virtually brand new for a mere 50p so that simply had to be bought!

Now onto the hard backs…

A Kind Man by Susan Hill – You will all know by now how much I love Susan Hill so this new novella has been devoured and will be read in due course.

The Devil’s Garden by Edward Docx – I know nothing about this, I think the author has been shortlisted for the Man Booker before, other than its set deep in the Amazon which is slightly bittersweet for me at the moment as I didn’t get to go thanks to everything that’s gone on with health etc lately.

The Cry of the Go Away Bird by Andrea Eames – A tale of a young girl in 1990’s Zimbabwe as Mugabe takes presidency; I think this surprise treat will be a perfect read for me.

To The Devil A Diva by Paul Magrs – Paul gave me a spare copy of this, one of his earlier novels, when he was cleaning his desk on his last day of work. I am looking forward to reading this in the near future.

Scissors Paper Stone by Elizabeth Day – Another surprise book that I have heard little about and so can’t really report on!

The Song of Achilles by Madeline Miller – Now this isn’t out until September but seems like its going to get a lot of coverage. I might have to get my Mum to read and review this one as she is a classicist and might give better thoughts than me.

Pigeon English by Stephen Kelman – This is another of the Waterstones 11 and one that I think could be one of the most exciting debuts of the year. This is a tale of immigration and knife crime told from the perspective of a young boy in a new inner city world.

A Discovery of Witches by Deborah Harkness – I think this book is going to explode everywhere, an adult tale of witches and wizards and a mystery at the Bodleian Library, I will either love or loathe this, I am hoping its love.

Some of these I have read already, some are up at the top of the TBR. Which ones have you read and which do you fancy or have heard great things about?