This week, in the latest of the Other People’s Bookshelves series, I am honoured to be sharing the shelves with someone who I consider to be a real legend in the book world. His enthusiasm for books, reading, publishing, promoting, prize giving, you name it, is amazing. He is the powerhouse that is Jared Shurin. Before we have a nosey at his books, let’s find out even more about him and his fabulous bookish projects and the like.

Jared is, among other things: a trained BBQ judge, a licensed (but not particularly talented) bartender, a proud holder of a passing grade (barely) in freshman Latin, a struggling baseball fan, accidental cat owner, passionate alphabetiser and level 230 in Avengers Alliance. His best celebrity sighting so far has probably been Angelina Jolie. He is co-founder of The Kitschies award. He also runs a small press, Jurassic London where he has edited and co-edited eight anthologies (including a couple on mummies, one on space and a Western) which publishes original fiction in partnership with museums, charities and other not-for-profit institutions. He can be found at Pornokitsch and on Twitter as @pornokitsch. Here are his shelves…

Yes. (To all of the above!) Our shelves are at maximum capacity, by which, I mean everything is double-shelved, plus books are wedged in at the top, plus we have a half dozen piles on the floor plus we have storage units all over the place from various moves. For the past year, we’ve been trying for one in, one out, but it never seems to work out that way.

Kind of. There are separate shelves for proofs, “fragile old stuff”, history, books on books, “London books”, “creepy books”, “ridiculously over-sized stuff”… the landing is for art books and comics, the bedroom is for all the vintage paperbacks. The bulk of our collection is hardcover fiction. It is vaguely alphabetical (by author), but there are a lot of exceptions. Certain publishers get separated out, as do certain authors (basically if there are enough of them to make the alphabetical shelving aesthetically awkward, they get their own corner). This leads to a weird series of prioritisation. Like a proof goes on the proof shelf unless it is by x publisher, in which it goes on that shelf, or by y author, in which case it goes on this shelf… If China Miéville and Dorothy Sayers ever co-author a book by Hard Case Crime, the whole system will collapse. No one – not even us – can find anything. I use a catalog software – Collectorz – which at least tells me what we have. But as to finding it on a shelf? Doomed.

I’m not sure I know. I think one of the first commercial transactions I ever engaged in – full stop – was buying several Handbooks of the Marvel Universe from my friend Jori when I was… really young. There was probably money involved, but I think the lion’s share of the negotiation involved Muscles (anyone remember those?). Those and all my other books are currently stored in Kansas City. There are these caves on the outskirts of town and companies use them for temperature controlled storage and paintball (hopefully not at the same time). So my books are actually under a mountain. Which makes me feel a bit like Thorin Oakenshield.

No secrets. Anne’s astounding collection of books on the history of science? Impossible to see. My collection of Midwood Press pornographic pulps? In plain view. We have no shame. (I swear, this shelving arrangement was her decision, not mine.)

Oh hell, at the first sign of smoke, I’ll be renting a forklift. We have one glass case. I say “glass” – it is an IKEA Billy case and we shelled out the extra 46p for the glass door component. (Which I promptly built on upside-down, because I’m useful.) Anyway, after much fussing about which books go in there – value? Rarity? Fragility?! – Anne and I went with the books that have the best stories. By this, I don’t mean the text of the books, but our connection to them. So it is a weird mix: Old Possum’s Book of Practical Cats is rubbing shoulders with Watchmen, Ghost Dance, She, The King in Yellow and about fifty other oddities. It is a strange sort of cocktail party. Anyway, I say all this because, if there were a fire, I’m sure I could muster one of those crazy “read-about-it-in-the-tabloids” feats of adrenalin-fueled strength and chuck the whole thing out the bedroom window.

My parents used to have a zillion of the old leather-bound Franklin Library books – I’m pretty sure they were hand-me-downs from a family friend. I used to stare at them like they held ALL THE SECRETS IN THE WORLD, and, as soon as I could, I read the hell out of them. It was amazing to learn how dull the world’s secrets are, especially when they come packaged as The Last Days of Pompeii.

The only problem with borrowing books is that then you’re under pressure to read them right away. I’d rather buy everything and then pick my way through them at my own pace. Generally speaking, if I want to read something, I buy the cheapest edition I can find (or better yet, an ebook). Then when I’m done with it, I’ll pass it on. But if I like it, like, like-like, in the “I’ll ask your best friend if you think I’m cute” kind of way… I’ll actively hunt down the best copy I can find: hardcover, signed, proof, the author’s mummified hand, whatever. 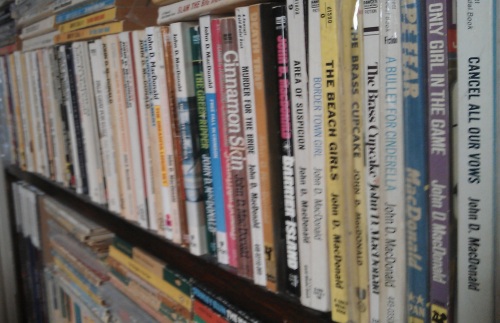 A billion. I mean, there’s the big stuff, why yes, I’d love a manuscript of The Magus with John Fowles’ annotations as he prepared the revised version or a presentation copy of D’Israeli’s memoirs that he sent to Gladstone inscribed with “My Reform Act now, HA HA – Dizzy”. But it is more the little things – it bugs the hell out of me that my Engineer trilogy is made of mixed US and UK editions and that I never have a reading copy of Kraken and there’s that one damn volume of The Walking Dead that I always forget and there are several holes in the Hard Case Crimes and don’t get me started on the D-series Ace Doubles and I’ve been missing one – one – of John D. MacDonald’s books for as long as I can remember and… and…

Not really sure. Some friends have been a little disconcerted by the landing filled with comics, but then, what are they going to think, that we’re big geeks? Odds are they knew that before they stepped through the front door… It is always fun to watch people browse our shelves. It is the first thing I do when I step into everyone else’s homes, so it is only fair that they return the favour.