I think this might be like buses, I don’t see books about books very often and then three come along in quick succession, but which one to read? Last week I told you about ‘Stop What You’re Doing and Read This!’ and ‘The Library Book’ and then in the library I found another gem caught my eye, appropriately titled ‘Speaking of Books’. 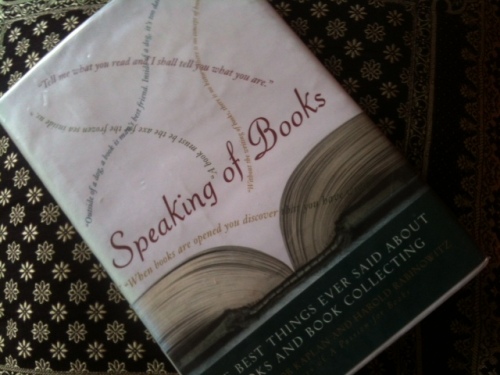 I haven’t heard of the editors Rob Kaplan and Harold Rabinowitz before, but apparently they have another book like this called ‘A Passion for Books’ which may need seeking out. Initially I thought it was simply going to be lots of quotes about ‘the best things ever said about books and book collecting’ from many of the greats of reading, which is the actual premise. However it has been done in a wonderful way where the quotes come in forms of categories. We have ‘in praise of books’, ‘bibliomania’, ‘the enemies of books’ etc, etc each with their own introduction and discussions on how they can be applied to the avid reader and book lover.

The section entitled ‘what to read’ is the one I have had a chance to devour so far, because I was stuck on what to read, and what could be more helpful than quotes like…

‘A man ought to read just as inclination leads him; for what he reads as a task will do him little good.’ Dr. Samuel Johnson

‘Choose an author as you choose a friend.’ Wentworth Dillon

‘Read the best books first, or you may not have the chance to read them at all.’ Henry David Thoreau

I have to admit I have no idea who those three people are, but what they say certainly makes sense. Winston Churchill himself seems to sum up the idea behind this very book (clearly he knew this book would be produced someday) when he says…

‘It is a good thing for an uneducated man to read books of quotations… The quotations when engraved upon the memory can give you good thoughts. They also make you anxious to read the authors and look for more.’

Well who could argue with that?

Filed under Books About Books