Are actually furious they haven’t been on the blog for ages and ages. After all who loves books and doesn’t love cats. Anyway, they would like to wish you a Happy World Cat Day! They have both been enjoying a day of treats and even more adoring love than normal. They would also like to remind you about a post of cats, books and book lovers that they did for the launch of a cat based book a while ago. Here it is.

If you have any cat and book based posts do let these two know, they would be delighted. Or if you could recommend any fantastic felines in literature?

So I promised that a special guest would help with the draw of winners for copies of ‘Great Expectations’, the next Classically Challenged title, and while she didn’t pick them out of a hat at random quite by herself I thought it would be a nice way to introduce Millie the Kitten… 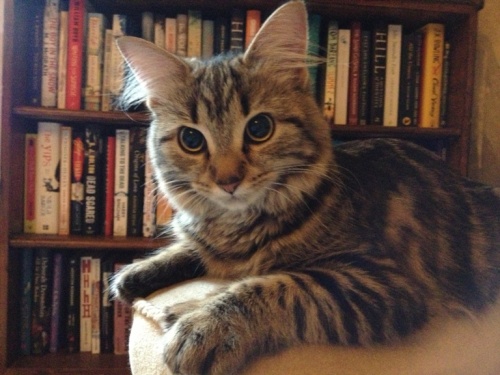 Yes, that is right The Beard and I have gone and gotten a play pal for Oscar, as with me going to Grans a lot he is spending a bit too much time on his own and we thought this would be a way of making him feel less lonely. I can’t say that he is 100% thanking us right now, there has been so much hissing and wailing, but he tolerates her at the moment and they can share a room, just not a chair or sofa… yet! That said we have warned him that he might not want to be too domineering of him now as in the long term, whilst a few months younger and rather smaller now, she will be the bigger of the two as we have been informed that, if not fully, she is definitely half Maine Coon and by the age of three years old could be almost a metre long. I shall have to sleep with one eye open!

Now she was named Millie when we got her and I desperately wanted to call her Daphne or Nancy instead but she knows her name and so we have made up our own histories of how we named her which weirdly aren’t the same. The Beard says we named her after Mildred Pierce because he loves Joan Crawford and the movie (which he didn’t know was a book) and I am saying it’s after Mildred Hubble, the worst witch, make of those stories what you will, ha.

She is utterly gorgeous and despite a slightly prickly exterior, she hissed at me for the first 24 hours and now hisses at Oscar on sight though no raised hair anymore which as she is so fluffy was hilarious, she is really friendly. She likes to sit on the reading chair, as shown in the picture, or sit on me in the reading chair or by your feet, apparently this is a Maine Coon trait, and while she can’t mieow she can ‘chirp’ which is the funniest thing every time you greet her, and really confuses Oscar! Anyway I won’t bore you too much but thought you would like to see the new recruit to the Burton-Savidge household. If any of you have Maine Coon’s I would love to hear from you about them, and if you have any tips for making cats be friends do please let me know, it’s going ok just very slowly, and I think the noise when they spat sounds worse than it is. Fingers crossed.

Now for the winners of ‘Great Expectations’ could Susan in TX, Brita Bevis and Laura Caldwell please send me your addresses and I will get Oxford University Press to send your copies out asap. Also, I haven’t answered comments for a while but it seems some people didn’t get ‘The Warden’ can you drop me an email if they still haven’t turned up and I will sort this out asap too. Oh and if you still want to win a copy then AJ is extending his competition entering times till 1900 GMT today as we got confused and posted at separate times so you can enter for another few hours there.

Right, I am off to coax the cats into friendship, or try.