Who Likes A Negative Review?

…Interestingly it would appear that you all rather like them actually. I was really interested to see the results of the survey that I asked you all to take part in, and you still can if you haven’t yet, a while back on and about books and book blogging. I had always been rather unsure about negative reviews and wasn’t sure that you would all be fans, yet it seemed from the results (shown below) that actually rather a lot of you are, but why? 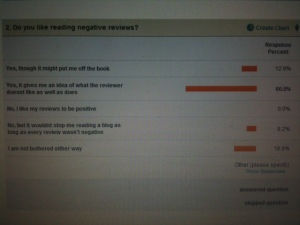 It was interesting as until then I hadn’t really thought that if all I was writing was positive reviews you might not be getting a rounded picture my ‘reading personality’, as one of you very nicely put it in the comments box, and what I found even more enlightening was that a good fair few of you felt that if all you were reading was positive then a blog begins to look like a PR campaign and that is NOT what you want from a book blog. The other valid point that came from it all was that ‘nastiness is unnecessary’ but being ‘constructive and explaining what you don’t like’ is very much the way forward. You also made it very clear that if all you are hearing from a blog is negative then you will be unlikely to keep coming back.

The thing that has previously held me back from writing negatively about books is that a) an author has put hours and hours into a book and I haven’t written one (well not a whole one yet) myself b) I wouldn’t want to put anyone off a book. However after seeing your responses you may have noticed recently that not one but two books have received less than favourable though hopefully polite and thoughtfully explained reviews on Savidge Reads in the last few months. I also have to add here that I don’t think my word is anywhere near the law on books and am sure you all take several reviews into account before you do or don’t read a book.

I was interested when recently out for a coffee with Paul Magrs, during a rare hospital free day or two, and he told me about a huge furore that had been caused by a negative review written on a blog, one which the author had seen and had really flipped out about. In fact it was this discussion that made me want to talk in more detail about negative reviews. It is one of the most interesting, and initially hysterical, series of comments I have ever read, one that actually sees the author starting to tell commenter’s and reviewers to actually ‘f**k off’. Seriously.

The book in question was ‘The Greek Seaman’ (the very name had me sniggering, sorry I should grow up) by Jacqueline Howett and it was featured on Big Al’s Books and Pals, a book blog I hadn’t heard of before. The reviewer hadn’t liked it and said so. Fair enough, it didn’t seem a personal attack, they said what they felt and there is that thing called freedom of speech. However the reaction of the author, who was understandably hurt, though any author I have met has said one of the most important rules of writing is be thick skinned and open to critique, who eventually started to lash out. Initially this all seemed slightly amusing yet then the commenter’s, clearly fans of Big Al’s, started to fight for him and as you read on it becomes quite ugly in parts. So where does the line stop and start, at what point does something go from constructive to cruel?

I bet in a few cases though, if myself and Paul are anything to go by, this will quite possibly have also worked slightly in Howett’s favour too. Paul was inspired to download a copy of ‘The Greek Seamen’ right there and then on the spot, which I bet several other people have also done afterwards, to see what the fuss was about. So I naturally had to pilfer his kindle off him and give the first chapter a whirl so I could see what the fuss was about too…

What did I think; well I didn’t finish the book. In part because the writing wasn’t my cup of tea, the fact the possible heroine of the piece was wearing a purple rippling top, white trousers and beige shoes (who would, really?) and was obsessing over some plants her mum was growing in the attic for a good few pages and wasn’t quite gripping me, if Jacqueline Howett comes and tells me to ‘f**k off’ in the comments today I will possibly die of laughter and be utterly thrilled, and I got the giggles because of the whole furore I had read on that blog. So in truth I didn’t even finish the first chapter, erm, maybe everything wasn’t aligned as we all know it sometimes needs to be with a book we read?

Do have a look at the now infamous review and its reactions and let me know what you think? Who goes too far, is it the reviewer, the author or the commenting bystanders? What are your thoughts on a negative review? Do you like them, loathe them or are you not that bothered? Has a negative review made you rush out and read a book, if so which one and was the reviewer right or a million miles off?