Six Months of No Book Buying…

When I actually realised that I hadn’t bought a book for six months I almost had to have a little lie down. I know, I know, I imposed the rule on myself. It’s just that it seems to have gone so quickly. Has it been painless? Well that’s partly what today’s post about. Before I go any further though, I do want to talk about why I decided that I wouldn’t buy books for a year for those who have come into this all a little late.

The initial idea dawned on me as I was reading Susan Hill’s ‘Howards End is on the Landing’. Instead of buying new books as she normally would (though she carried on taking books for reviews/work), for one year Hill went through the books that she had bought over the years some she had read and some she hadn’t. I thought it sounded a good idea and with all the books coming in for my day job and the crazy amount that I was spending on book spree’s I wasn’t reading as much as I was buying. Nothing wrong with that but then again why not test myself. Not to the point of being a martyr or anything. And it has actually been a test especially as I have spent six months missing these… 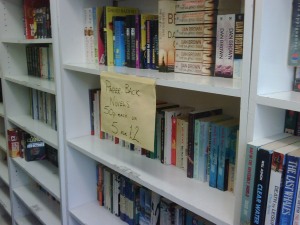 Yes the charity shopping has been the hardest thing that I have actually had to avoid, especially when I have been taking lots and lots of bags up there myself.  Gone are the days when I would leave with about as many as I had dropped off. Oh how I do miss them. However, I have the insatiable desire for more; which used to stray into binge buying which verges on wastefulness and hoarding. It was like an addiction, one that had spiralled dangerously so that was another reason to stop, not for good, but for twelve months.

I know how fortunate I am in getting the books that I do. I show you all of the loot that arrives not to show off but because I still get excited by any new book that comes through the door, just as I love seeing them on other blogs arriving. Now instead of book binges I list binge. I have lots of lists of what I want instead here there and everywhere around the house in several notebooks (a new addiction). This helped as at the weekend when The Converted One took me into my favourite charity shop and said “choose six, one for each month as a treat”. And so I did and walked away with… 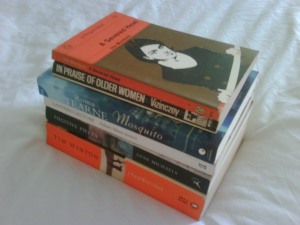 All in all I did well, I could have come away with triple, instead I mulled it all over. I think The Converted One was impressed, though maybe not by how long the mulling took! So here’s to the next six months… and the twelve books I get at the end, ha!

What do you think of my selection? What have you had a good book binge on of late? If you have stopped buying books, as it seems to have been a movement this year, what have you found the hardest thing? Why is it when we have lots of books we always want more?