There are sometimes books that come into your life and strike such a chord with you that they leave you somewhat stunned. Those books are wonderful. Then there are books that strike a place in your psyche which resonate with such force within you that they can leave you breathless like someone has just punched you hard in the heart. Midwinter, Fiona Melrose’s debut novel, was a book that did the latter for me and completely shocked me with how much it affected me. 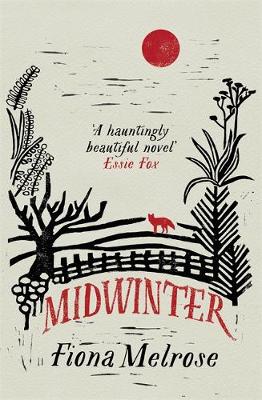 As Midwinter opens young lad Vale is out in the middle of the water trying to save his friend, Tom’s, life when they take a boat out after one too many drinks finding themselves in danger. We are thrown straight in and initially think that this could be the heart of this novel. Wrong. We soon discover, and this isn’t really much of a spoiler, that Vale had gone out to get drunk after an altercation with his father (Landyn Midwinter) about his mother, who has been dead for some years. Melrose pretty much throws us right into the centre of a fractured family just as they start to spiral out of control all the more. I liked this, no messing about. I think we have all endured those novels which spend at least two hundred pages slowly but safely taking us from the smallest chip to the tiniest hairline fracture and beyond. Yawn. No the case here.

What Melrose does though is far more powerful and also more cunning. Cunning in a good way. We think we know the issues, we then learn that actually much more is going on which is slowly revealed. Why did Cecelia die? Why were they in South Africa when it happened? Why did they then head back to this desolate part of Suffolk after? And why does Landyn believe that Cecelia has come back as a wild animal watching over them?

‘I saw my fox this evening, Son. You remember the year I had to leave food out for her poor thing? I know she knows me. Came out of the night and looked right at me. Come to check we were all doing ok. Beautiful.’
I knew I was babbling. The lad said nothing, only fiddled with the bed sheet. His colour wasn’t right yet and we’d be needing to see the doctors again even after he was released. And he carried the mark of my anger, his eye still swollen. He carried on rolling the hem of his sheet into a little peak between his thumb and forefinger.
He made to clear his throat a little. Didn’t look up though. ‘It’s not her you know?’
‘What’s that?’ I had to lean forward to hear him.
‘It’s not her. It’s just a fox.’

Whilst there are these questions going on, really where the story lies is in the void that grief can build between two people. The lonely desolate space where shock leads to silence, where things can become misunderstood, messy and where a chasm needs to be covered up and potentially avoided. This is where this book really hit home for me. Without going into too much detail, when I was ten and my mother twenty six my stepfather accidentally killed himself, I found him after a shopping trip with my mum. We didn’t properly talk about it for almost fifteen years in which time we both created our own version of events and the story of the others filling in the blanks often wrongly, mine leading to rebellion.  Very, very, very like Vale’s, though not with a boat as we all know I hate boats – sorry had to lighten it a bit. What blew my mind somewhat was seeing my feelings and that chasm of silence between two people written so like my own experience but from someone else, someone who I have never met but will definitely give a hug if I do.

Fiona Melrose is an incredible writer, not just because she writes about that empty space between two people who don’t know how to communicate or simply can’t, this space which she throws her readers into. She also writes incredibly about atmosphere, Suffolk broods as the Midwinter house hold does, nature can be friend or foe as we see through the novel when she equates natural elements or moments with what is going on in the book, and not just in the Suffolk countryside but the South African too.

The trees out there always felt nervous, I felt that from the day we arrived. Later realised they were always anticipating rain, bristling for it even, and after one of those lovely downpours you could just about feel the roots ease out as they relaxed under your feet. For a week or so and then they’d be back tilted on the edge of their seat, an eye on the sky and another on the furthest horizon.

She also writes incredibly about grief. Not just how people cope with it, or don’t, at the time or how they deal with it as a long term mental battle, like seeing foxes. But also how grief can be a thing which you cling to, in the case of Vale, and use all the emotions around it (anger mainly) to push yourself further. Or how it can be something which will nag at you one moment, leave you completely alone then next and then come at you full throttle when you least expect it.

Don’t I still think how things might have been different for his mother? Some nights I dream things turned out well for us. Then I wake full round and as I fall back into my old sad skin, I remember myself again and know it not to be true. This is a cruel trick the mind plays. Like a sly old ferret those hopeful thoughts burrow in there. And then, when you’re getting all cosy, they turn on you and rip you right open with their sweaty little teeth until you feel your guts are spilling out all over again.

And she doesn’t always need a paragraph or two to do it in, often in this novel a single sentence can contain all that needs to be said. Sometimes a blessing is just shy of a curse.

If I am making it sound all doom and gloom, albeit it powerful doom and gloom, there are often some real heart warming moments that never verge on clichéd. There is the way in which Landyn bonds with his sons’ best friend, and in turn how Tom bonds with his nurse. There is the relationship between Vale and a barmaid. There are also wonderful moments between grown men in the village, such as when Landyn is at his wits end with Vale and his friend Dobbler says ‘Ah, I knew a boar like him once.’ When pushed on how he might make things better he replies ‘Parsnips.’

After the effect that Midwinter had on me personally, and rather unexpectedly, it is hard for me not to just go on and on and on about how wonderful. But then part of the reason why I hope you read this blog and these thoughts is the personal interaction I have with this book, the joys of bloggers and vloggers eh? I will say I had a slight quibble as Vale’s storyline develops and at one point became a little melodramatic for me, but we all need a melodrama or two in our fiction really don’t we?

I think what astounds me most is that Midwinter is Fiona Melrose’s debut because this to me felt like a novel which is three or four down an author’s career. Don’t get me wrong I bloody love a debut, always have, and like all the best debuts Midwinter is brimming and jam packed with themes, ideas, fantastic set pieces and characters. Yet there is a control and a restraint, which makes the book all the more sharp and affecting to the reader. I cannot recommend you read this novel enough.

I am thrilled the Baileys Women’s Prize for Fiction made me head to Midwinter, though I have been meaning to read it for a while. If you haven’t read Midwinter you can get it here. If you have read it then I would love your thoughts and experiences of it. I would also love to know about books that have shocked and surprised you as they made you see moments of your life on the page.