I do always like to thank the people that have put me in the direction of a book that I have gone out and found and then really enjoyed. In  the case of ‘Blankets’ by Craig Thompson I would have to list most of the book blogosphere because I have seen this here there and everywhere and everyone has loved it. I will admit that I wasn’t sure it would be my kind of thing, I don’t know why but somewhere the idea that graphic novels aren’t proper novels has been placed. Thank goodness for libraries and being able to take a risk with a book now and again, especially one which breaks your reading impasse, as now that prejudice has been erased once and for all.

‘Blankets’ is a graphic novel but it also feels like a fully built novel. I am not saying that I don’t think the two can co-exist but it’s rare when they have this effect on me personally. There are two strands running through ‘Blankets’. The first is the tale of two brothers Craig and Phil and their childhood in the strict, highly religious and rather scary family home in Wisconsin, the second of two young people falling in love for the very first time. In a way it’s like two separate coming of age (a subject I am not normally a fan of) events and times in one persons formulative years.

What impressed me first of all was how Thompson manages to interweave these two strands in a way that isn’t confusing. He doesn’t need to insert ‘flashback’ or ‘present’ and ‘past’ the pictures paint it all clearly (excuse the poor terminology) and what illustrations these are. I definitely wasn’t expecting to have an emotional connection with this book. I thought I would be entertained and pick it up now and again. Instead I read it in three sittings, I was hooked. The pictures convey, as do the choice wordings throughout, the emotions of both growing up in the severity that Craig does and how he feels when love first hits.

The second thing that impressed me was how Craig covers a lot of modern subjects that are quite tough just in the written form (not that I am saying one medium is better than the other). Through ‘Blankets’ Thompson encapsulates a world which at varying points features mental and physical disabilities, religion, sexuality, child abuse, depression, divorce, families and most of all love. 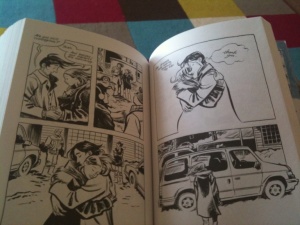 It really has left me wondering if you can call a graphic novel epic, if so then ‘Blankets’ is indeed a modern epic. I would be surprised, but pleasantly so, if there were any graphic novels that can better this on both artistic and emotional levels. 9/10

I am obviously in an adventurous mood because not long after I read this I decided to try some ‘steampunk’ another genre that I have been a little dubious about. You will have to wait a little while to see my thoughts on that specific genre. Have there been any genres that you were, possibly for no reason, adamant that you wouldn’t love and then tried and did? Can you remember the titles? Did you ever look back? Can any of you recommend any other stupendous graphic novels to keep me fixed?