Last year I made a mini pledge with myself to read more books set in the wilds of the countryside. This had happened after reading two novels, ‘The Proof of Love’ by Catherine Hall and ‘The Hunger Trace’ by Edward Hogan, which blew me away and haunted me all the more with their atmosphere of the brooding rural landscapes. When my eyes happened upon ‘The Claude Glass’ by Tom Bullough in the library the cover alone suggested to me that this could be one of these types of reads and so I took it away with me as fast as I could. The fact I knew nothing of the book or indeed the author only excited me more, would I be discovering a hidden unknown gem. It appears I have, an incredible one in fact.

Sort of Books, paperback, 2007, fiction, 201 pages, borrowed from the library

‘The Claude Glass’ has the story of two boys at its heart. Both aged seven years old Robin and Andrew, who live on the neighbouring farms of Ty’n-y-coed and Werndunvan in Wales, couldn’t be more different. Robin is brought up in a comfortable, if slightly controlled, environment with his seemingly new age parents, who seem to prefer to have their children call them Tara and Adam (which confused me at first) than Mum and Dad. They aren’t wealthy but they seem happy living the life they had idolised. Andrew however is almost feral; he can barely speak, never washes and in fact lives in the crumbling uninhabitable part of the farm hidden behind its pleasant facade. His father Philip is clearly in need of some anger management therapy and his mother Dora spends her days pretending to cook in a kitchen that has barely been cleaned in years.

‘Andrew knew already that it was going to thunder. He had known for some time – in the same way that he knew when he was hungry, or when he needed to go to sleep. Thunder grew in him, as it grew in the air and the wind around them. It scared him in ways that he couldn’t hold in his mind. It was the animal at the door with the yellow eyes, the face that had gawped at him in the room with the pattern for a floor, these people in the yard, calling his name periodically, hunting him down to his den.’

So what is a Claude glass and what is its relevance in the book? Well in part it is pivotal in the ending of the novel, which I won’t give away, but it is also rather symbolic. Claude glasses were created in the late 18th century as a way of seeing the world framed and, due to mirrored glass being tinted a dark colour, making everything look rather other worldly and eerily beautiful. For me as a reader this almost became a metaphor for the two families involved in the story being so polar opposite to one another. Robin’s family being ‘ex-hippies’ who have come to set up a stable life, and Andrews family who appear to have the external physically stable world and yet behind that facade is a crumbling world of madness and abuse. 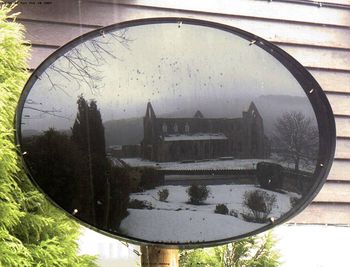 The effects of a Claude glass...

Yet these two polar opposite families have to communicate, there is an interesting mix of both competition and understanding in part, and in doing so Robin and Andrew meet and a form of friendship seems to spark. I won’t say what happens after because you need to follow the journey there but I will say that it takes quite a long time to get to this point. Bullough seems to want this to be a really slow building novel, the smallest tensions slowly appearing leading up to the novels conclusion, one that is so open ended it may frustrate some readers.

In fact I could imagine this could be a rather frustrating read for some people, there is a plot but it’s built one the smallest moments of near silence. The atmosphere simmers and broods the whole way through building a quite claustrophobic feeling in what should be open space. You think nothing is happening but it is quite the contrary. There are also slightly magical elements of the book too. Set in the early 1980’s Robin and Andrew don’t have access to television their imaginations run wild with ghosts and monsters. The atmosphere around them, and the fact their teacher them the local myths and legends, of Wales only adds to this.

‘Wales, he explained, had once been a very different place to the way it was today: a wilderness of fathomless forests, of talking beasts and birds that pecked at the stars.’

These factors might put off some readers, here I should admit I initially struggled to get my bearings, as there is quite a bit of work and piecing things together, as we have snapshots of the two families lives in different seasons, big things happen and then we skip a month or two not seeing the initial repercussions, plus the magical elements. Yet I loved these elements about the book and I really liked the fact Bullough creates this sense of place and people and wants you to work with him on building the bigger picture and using all the things unsaid along with tiny tensions to create the full narrative tale.  I think by now you will have probably guessed that I thought ‘The Claude Glass’ was an unusual and incredibly accomplished piece of writing, silently impressive and one that rewards you in many ways.

Filed under Books of 2012, Review, Sort of Books, Tom Bullough