One of the things that lead me to wanting to have a little break from the blogging recently was that I had got myself into the habit of reading to write about the books on here. That isn’t necessarily a bad thing apart from the fact I was beginning to rush read in my enthusiasm and putting pressure on my reading and suddenly I just didn’t want to read. A lovely parcel then arrived in the post, from another very kind reader, containing ‘The Bookshop’ by Penelope Fitzgerald and I felt fate was sending me a sign and it turns out that I think it was because it was not only a book I wanted to read there and then because of the title, which I think would appeal to any book lover, it was also a book that made me read slower (that doesn’t mean it was boring) and sometimes you need good books that do that too. 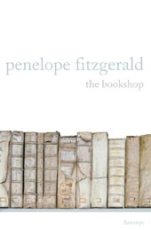 ‘The Bookshop’ centres around Florence Green and her desire to do something with her life after having been widowed. For several nights, as the book opens in the year of 1959, Florence has slept yet has felt she has been wide awake and the reason is she thinks she needs to open a bookshop in the seaside town of Hardborough. Something which she decides to do by converting the town’s ‘Old House’ which has been left derelict for several years so taking out a loan that’s what she does. Like all good smaller communities word spreads and as it does people start to ask her whether maybe she has chosen the right venue and before she knows it she is being subtly threatened by the towns self important and self elected honorary leader Violet Gamart who seems to have always wanted to make The Old House an arts centre but has never quite gotten around to it. Florence carries on with determination little knowing she will need courage as many an obstacle will be thrown in her way.

If I am honest I should have been slightly disappointed by this book. I was sort of demanding, in my head, a book about a book shop in a small town and all the crazy characters that pass through its doors. You do get that to a degree for example when Florence orders in copies of ‘Lolita’ causing a surge of gossip and huge crowds outside the shop causing traffic issues on the street. Some of it though seems slightly culled for the bigger picture which is that of a tale of a town wanting change and then being rather unsure it’s what the wanted at all and also of someone having the courage to do something different in the face of adversity. In the end for having all these strands I liked it all the better once I got my head around it.

Its not a book you can rush read (though its 156 pages so you could manage it in an evening or an afternoon) because its pace is meandering, rather like when you find your self in a book shelf slowly and enjoyably perusing the shelves you find yourself doing the same with Penelope’s prose and paragraphs. You get the feeling every word matters and every paragraph has been plotted, though there isn’t a massive plot in this novel, and placed where it is for a reason. Sometimes you get it and sometimes you don’t quite yet you still enjoy reading it regardless. An example would be the rather bizarre and unexplained haunting by the poltergeist in The Old House which the townsfolk are always talking about and when we endure it with Florence actually proved quite chilling, perfect for this time of year, which I loved and yet I am sure Fitzgerald had thrown in for a reason I didn’t pick up on my first read.

It’s a book I want to return to eventually though as it has all the right ingredients, it makes you laugh, its quite touching and frustrating as you get to know the town and its people and it actually made me incredibly upset towards the end – not by the ending itself but by something that happens about three quarters of the way through and which of course I am not going to tell you anymore about.  It’s not a book that will shout out its accomplishments and wry storytelling so you jump out of your seat with its brilliance; instead it quietly and unassumingly tells you a story that will stay with you a good while after the final page is turned. 9/10

Offshore by Penelope Fitzgerald – I enjoyed Fitzgerald’s Man Booker winning novel when I read it last year (I actually didn’t realise it was that long ago so gave myself a shock, how does time whizz by so?) and said I wanted to read more Penelope Fitzgerald, now I am even more eager too.

Any of the works of Muriel Spark – I don’t want to compare specific books because there aren’t any I can think of and nor do I think Spark and Fitzgerald are of quite the same ilk, its just there is something that makes me think if you like Spark you would enjoy Fitzgerald too.

I don’t know if others will agree about my Spark comparison, is that helpful at all or true? Actually it’s less a comparison more a ‘maybe if you liked this, then you might like those’. Anyway regardless Fitzgerald is an author who I will endeavour to read even more of, and if you haven’t tried her do, I am just not sure where I should go next. There were lots of blurbs to her other books in the back of this one and they all sounded good. I thought I had some more of her books in the TBR but they are Penelope Lively, who I haven’t read any always confuse the two, is Lively any cop? Any advice?

This book was kindly sent to me by a reader of Savidge Reads just a week and a bit ago – a big thank you.

I personally think that when you open a book that you know very little about and start to read it you give it a much fairer chance than you would a book that everyone has been raving about which I think makes you judge it more harshly. So what about a book that people you know and trust choice wise don’t really care for? I tend to write them off from the start and having heard some reviews of Penelope Fitzgerald’s 1979 Man Booker winning novel Offshore, I wasn’t sure how I was going to feel about this book at all. But I have set myself the challenge of reading all the Man Booker Winners and so I gritted my teeth and… enjoyed it.

Offshore is set just as it says off shore. The shores in particular aren’t some glistening desert island but instead London in the late seventies, which was actually ‘the now’ when the book was released. In a small little community ‘belonging neither to land nor sea’ we meet the various residents of the houseboats of Battersea Reach. There are three main characters in the novel that we follow; Richard a man in a mainly unstable marriage who tries too keep everyone’s spirits up and is in some ways ‘the captain’ of the community, Nenna who has randomly bought a boat to live on with her daughters and husband, that latter of which never moved in and Maurice a male prostitute by occupation who is also looking after stolen goods.

How does a book that is only 180 pages and less than 50,000 words manage to encapsulate this society through the day to day and slightly unusual dilemma’s I hear you cry? Well that’s why I think it won the Man Booker. Though I could actually have read a lot more by the end of the book there isn’t much left to add. Just as quickly (and as wonderfully descriptively) as you are thrown into these people’s lives you are equally quickly (and wonderfully descriptively) thrown back out. These are snapshots not life stories and I quite like that in novels, especially with such a jumble of characters as this book has.

I happily meandered through their lives (it isn’t a fast paced book at all), some mundane and average, some dramatic and emotional like a barge meanders down the Thames taking in all the scenery along the way. It is very much a London book and very much a book about normal real people, both factors I like in any book. I have to say my favourite characters and therefore parts of the book because they were in them were Nenna’s children Tilda and Martha. I wanted to join them on the muddy banks of the river finding hidden treasure’s and running wild. This is a very economic book, sparse in words but full of vivid imagery and characters. I am so pleased that I had taken up the challenge and found what may not be on of my favourite reads of all time but fine example of simple, pure literary fiction from an author whose work I want to read more of.

This book has also brought up a little something that I did want to mention though and that is the timing of reading books and how you might relate to a book dependent on mood, where you are etc. So for those of you who have read the book and think I might have gone crazy, I will leave you with an image of where I was reading it (it’s very short so only took me a few hours)…

I think the surroundings whilst I was reading were quite perfect for this novel.