Important Artifacts and Personal Property from the Collection of Lenore Doolan and Harold Morris, Including Books, Street Fashion and Jewellery – Leanne Shapton

I think for the purpose of my book thoughts today, and also so that I don’t wear away my fingers to stumps, I will simply call this book ‘Important Artifacts and…’ from now on as they have wisely done on the spine. When I first heard about this novel I didn’t see how on earth someone could depict a love affair from the very start until the unfortunate end through photos of the effects bought and written during its time. Yet at the same time I was very much intrigued and what followed was one of the most unusual and delightful reads and reading experiences I have had in a while.

I am still pondering if ‘Important Artifacts and…’ is a novel or not as it does tell a tale incredibly well yet isnt a straightforward novel. I suppose in some ways you could classify it as a graphic novel but then its photographs not illustrations, in fact it verges on coffee table material. Sorry let me explain for this is no ordinary book of the tale of a failed relationship from start to end. Instead what we have is an auctioneer’s catalogue filled with items accumulated, dedicated and savoured from the relationship of Lenore Doolan and Harold Morris who met at a Halloween party in 2002.

There is nothing particularly special about Lenore and Harold or the artifacts that they collect and yet that is why it works so well. We have all made people a special CD with songs aimed just for them (or even in some cases made tapes), taken photo’s of them doing mundane things as Harold does with Lenore putting on lipstick, and kept flyers for gigs we went to. Mine are all in a huge pile of shoe boxes, I have been keeping them since I left home at sixteen and that’s what made it so vivid for me, I have done all these things. I did occasionally think did they ever go out for a meal somewhere nice and not keep a match box or ever savour a programme from the theatre, but then maybe they weren’t utter hoarders like I am.

The beginning of the relationship and the urgency of that next meeting and how hard it is not to see this wonderful new exciting person its wonderfully portrayed and chronicled through a series of postcards Harold sends Lenore from work trips away almost daily. 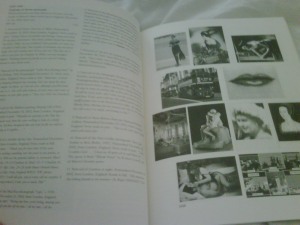 I thought the fact (I say fact like its real, see it got me good) that the couple read the same plays and books as each other whilst one was ever away was possibly one of the most romantic things I have ever read. In fact books are a big thing for the couple and there are masses of battered copies of well read books throughout filled with inscriptions. My very favourite was a wonderful copy of Nancy Mitford’s ‘The Pursuit of Love & Love in a Cold Climate’ in which Harold has written “Loaned to Lenore on the eve of my departure to London, Dec 11 2002. To be claimed upon my return. Don’t lose my place. H.” 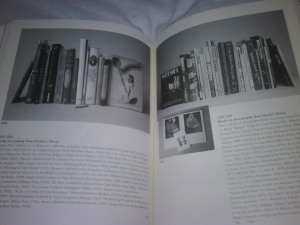 Relationships and all their highs and lows can be very difficult to create in fiction and have a reality to them. They might not capture the excitement at the start, then the moments of missing someone madly, the stage when the honeymoon period ends, the initial delight in routine, the peaks and toughs after yet here Leanne Shapton has done it near pitch perfect.

I have to say after closing the final page I found it most difficult to believe that Lenore and Harold has actually been works of fiction because through all their belongings I had lived through the relationship most vividly. Through a completely new medium I think that Shapton has created a wonderful work that captures a couple and their relationship in its entirety and in an utterly convincing style. I think this book is something quite special. I wonder what Leanne Shapton will do next as this will be a tough book to follow.