I have often mentioned how I am a fan of the fairy tale, speaking of which did any of you see the brilliant show The Ladybird Books Story on BBC4 last night, they had a wonderful section on the Well Loved Tales I still have many a copy of. Anyway, back on track Savidge! There is something about this time of year as Christmas is almost upon us that makes me think of the magical (the potential of snow maybe?) and so is a time I turn to fairy tales be they for adults or children. One such collection I read earlier in the year is perfect for anyone of any age and so I thought I would tell you all about Viktor and Rolf’s collection Fairy Tales, which would make an idea stocking filler if you are looking for anything last minute.

Fairy Tales is not the first foray of fashion designers turned writers, however what is different with Viktor and Rolf’s collection (pun intended) is that this is not a case of the fairy tales we know and love being retold, oh no, these are twelve wonderful original tales that make Viktor and Rolf seem like the modern Brothers Grimm. We have tales of disco hedgehogs, spoilt princesses who need to learn their lesson, planets who pass in the night and much more. My favourite I think had to be about The Little Dragon Butterfly, rather lost in the world and not sure where he fits in which made me feel rather moved and laugh rather loudly within very few pages.

The bees were so angry that they charged straight at the little dragon butterfly. He took one more look at the burning nest and at the swarm of angry bees and flew away as quickly as he could.
As he escaped, he accidentally set a few trees on fire.
‘Go away, you scary little freak!’, the bees called after him. ‘And don’t ever come back!’ The dragon butterfly was now in a real panic. He had no idea what was happening to him.

This theme of being ‘different’ or ‘other’ is probably the most common in the book. We have The Disco Hedgehog who randomly starts to glow multi-coloured and luminous in the night, and very much out of the ordinary and girls such as Doris, or Candy Floss, who is teased for her hair. Yet as we read on Viktor and Rolf show how differences should be celebrated and treated as rather special beauties which we each possess, a lovely motto for anyone young or old especially as it is done with so much fun and not an ounce of being holier than though.

As you would expect from two fashion designers the book is a thing of beauty and illustrated immaculately throughout the main theme of it all being monochrome and a rather vivid, almost neon, pink. As the stories vary in length sometimes the imagery surrounds the whole story (as above), sometimes it is interwoven with a page of text or takes over two pages at the heart of the tale, and quotes are ribboned throughout the text giving it a luxurious feeling whilst also harking very much to fashion. It is all done beautifully.

There is also lovely modern twist to many of the tales too whilst remaining magical, a deft touch indeed. One of my very favourites being The Fifth Perfume Bottle all about a poor little bottle teased by all the others for being the one that the princess always chooses last, well suffice to say we have all been picked last for something (any ball game at school in my case) but here the little bottle gets the last laugh. Flowerbomb, which is the title of one of the pairs perfumes which they say is ‘all about the power of transformation. The power of every individual to turn anything into something positive’, sums up the very story itself. It is a tale of a dictator who rules with fear someone decides to swap his evil bombs for something much nicer. 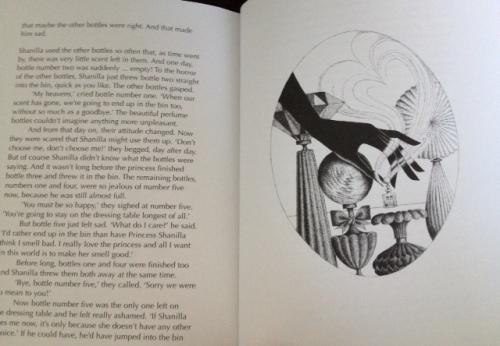 All in all Fairy Tales is an absolutely stunning collection, though I do think they should have kept the original name of Sprookjes – amazing. It is a book which will make you laugh rather a lot (especially The One-Day Wonder, all about flies and what they like to hang around in, sure to make young kids giggle along with your inner young self – I know I did), escape into a wonderful series of worlds and just thoroughly enjoy however old you are. Though I think I will have to pack this in my bag for when I go and see some of the (much) younger Savidge’s at New Years as I think really this is a book that should be enjoyed by differing generations of fairy tale lovers, together.

Have any of you read Viktor and Rolf’s collection and if so what did you make of it? Are you a fan of fairy tales or do you think we should grow out of them (if you do I may bar you from this blog, ha!) If you are a fan, which are your favourite fairy tales, be they old, new or retold?