I love a ghost story; I also think that they are one of the hardest types of books to get right. If the author puts a foot wrong, or even a word wrong, at any point the uncomfortable becomes the unconvincing and suddenly the spell is broken because the fear has gone. It was therefore with much interest, and rather a lot of hope if I am honest (as this was a lead up to Halloween read), that I picked up Michelle Paver’s ‘Dark Matter’ which even comes with the subheading ‘a ghost story’ on the cover, a lot to promise before a page has been turned.

‘Dark Matter’ opens in January 1937 as we meet Jack Miller, the narrator of this tale through his very diary entries, as he agrees to take part on an expedition to the Arctic. This is a mission of hope for Jack who is finding his life rather lacklustre to say the least. He is very poor, lives in one of the unfashionable parts of London (on a personal note I will say that Tooting was much nicer when I used to live there) and though he is studying he doesn’t feel like has any prospects. To his mind this could be a great adventure and change his life forever, even if he doesn’t really like the ‘posh boys’ who he will be travelling with.

The arctic is a brilliant place to set a ghost story. Not only is it an area that remains a vast area of land with no one about it is also a place that is remote and hard to get in reach of, especially in those times within which the book is set when a boat would take a good three days from the mainland, it is also a place of some mystery and wonder. It is a great place to set up and build upon feelings of unease, which Michelle Paver does exceptionally throughout, along with so much open space and yet no where really to run.

“We’ve been so busy that at times I’ve hardly noticed our surroundings. But sometimes I’ll pause and look about, and then I’m sharply aware of all the busy creatures – men, dogs, birds – and behind them the stillness. Like a vast, watching presence.
It’s a pristine wilderness. Well, not quite pristine. I was a bit put out to learn that there have been others here before us. Gus found the ruins of a small mine on the slopes behind the camp; he brought back a plank with what looks like a claim, roughly painted in Swedish. To make the beach safe for the dogs, we had to clear a tangle of wire and gaffs and some large rusty knives, all of which were buried under stones. And there’s that hut, crouched among the boulders in a blizzard of bones.”

It’s also a place where for some of the year around you go from having 24 hours of daylight to 24 hours of darkness, and this is what Paver uses very much to her advantage. As the amount of hours of sunlight lessens the tension heightens and stranger things start to happen. Yet as things start to happen, and I won’t give away any specifics, you begin to wonder if it is Gruhuken as a place itself that is haunted, or if it the minds of those staying there in such conditions. We all know the mind can play tricks on us when we are in the comfort of our own homes on a dark and chilly night, imagine then what pitch darkness in freezing temperatures with little company could do to you.

Not only was I genuinely scared in parts of ‘Dark Matter’, which is the aim with every ghost story and in which I think this succeeds, I built a real bond with Jack (whose story with his lead Gus has an additional excellent twist, which I won’t say more about here but would love to discuss in the comments) a narrator and I think that was because of the book being written in his diary entries, as well as some of the others he spies on, throughout. You get a real sense of the emotions and internal processes of the situation that they find themselves in.

The atmosphere that Paver creates is fantastic and you do actually feel the chill in the air and the oppression of the endless darkness. It has certainly made me want to run and read anything else that Paver has written before whether it is ghostly or not. I have to add I think the pictures in the paperback edition combined with Paver’s prose, and setting of atmosphere, really added to the experience. 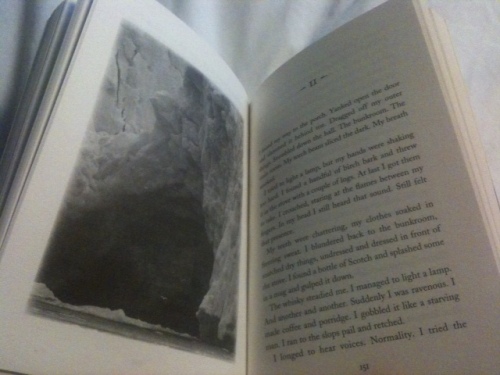 ‘Dark Matter’ is a wonderful, chilling ghost story. It is also just a completely brilliant book regardless of that tag. It takes you on a journey with some people you feel you really build relationships with, grips you, thrills you, scares you and might just break your heart too. I cannot recommend this novel enough, especially in these dark nights, you will certainly get more than you bargained for. I did.

I have to say I now want to binge on arctic based novels, with ‘Dark Matter’ recently and reading M. J. McGrath’s ‘White Heat’ and ‘Last Rituals’ by Yrsa Sigurdardottir (review to come soon) plus Frozen Planet on the telly at the moment I seem to just want to emmerse myself in that world which seems so distant from my own… even though Manchester is bloody cold at the moment. Ha! Has anyone else a little arctic obsession at the moment, maybe I should plan a little ‘reading expedition’ out there and see if any of you want to join me? In the meantime if you have read this, do let me know your thoughts.